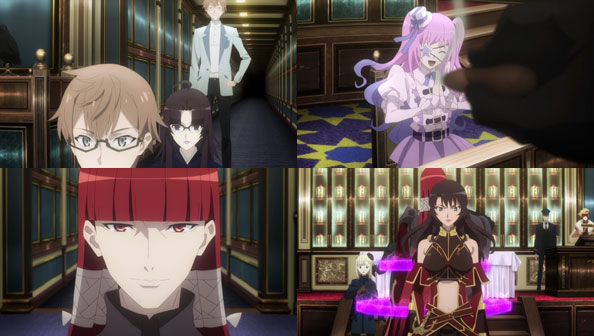 For the at times jumbled and confusing but generally thrilling and satisfying conclusion to the Rail Zeppelin arc, the rule about no one uninvited boarding the train is again cast aside, as it was for Melvin Wains. For one thing, both the train and Lord El-Melloi II were initially fooled by Dr. Heartless, who disguised himself as Caules with intel from Yvette and murdered Trisha by controlling Karabo.

The real Caules then appears, along with another uninvited guest in Reines, with Luvia’s research in hand. They were able to fly to the train using something called Touko Travel.  What finally got El-Melloi wise to the fake Caules was the fact he was able to heal him so easily; something he knew his student wasn’t quite capable of. The Lord asked Adashino to put on an act so Heartless would think they were at odds.

But gaining mystic eyes wasn’t Heartless’ only objective. By placing both Rail Zeppelin and the Child of Einnashe on the same Leyline, he was able to create a fake Holy Grai. He used that to summon a fake servant, “Hephaistion,” of the “Faker” class, based on the residual image of Iskandar. She appears beside him when Heartless uses a (fake) Command Seal.

Having no intention of being caught, he has the conductor open the oculus to the auction room allowing him and Hephaestion to leave, giving them and Gray/El-Melloi more space to fight. Heph and Gray cross swords again, while Heartless summons the Child of Einnashe once again.

At this point, Karabo emerges from the train with his Mystic Eyes restored, and he delivers a number of blows to Heph by bringing past slashes into the present, all while El-Melloi uses his own experience in following Iskandar to deduce Heph’s story. 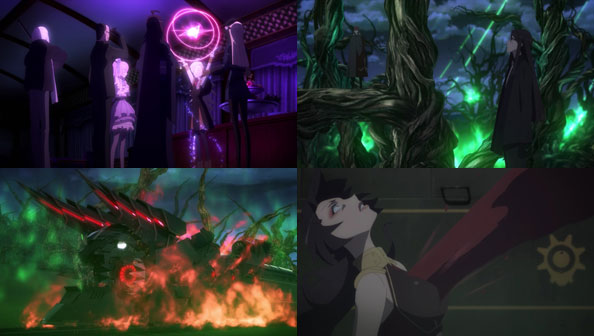 Others get into the mix, with Olga-Marie leading a big astromancy spell that rains green flames down upon Einnashe’s twisted branches, while Rail Zeppelin’s staff transforms the train into a weapon that projects and amplifies the power of loaded Mystic Eyes to fire a massive rose-colored beam of energy that damages Einnashe and forces it to retreat.

In the midst of all this chaos, El-Melloi is preparing a spell, one using the amorous pendant worn by Trisha. He’s able to cast it once Heph freezes both Gray and Karabo with her Mystic Eyes, and that spell allows Gray to bring her scythe down in a critical blow across Heph’s chest.

Still, she’s one tough cookie, as she summons the Gordius—er, Hecatic Wheel in order to escape with Heartless. El-Melloi is out of gas, and leaves the rest to Gray, who is steadied by Karabo. He urges her to hear the prayers embedded in her weapon, and to add her own: her desire to protect Sir and everyone else. Those prayers are answered, and the third restraint is rescinded the use of Rhongomyniad is approved, and she blasts Heph and Heartless into the ionosphere.

I have to hand it to this show, despite how much last week’s table-setting and mulling around annoyed me, I knew it had it in it to deliver a powerful climax, and so we have here. Like I said, there were a lot of moving parts that weren’t necessarily made clearer by last week’s preparations, and quite a bit of jargon tossed around, but there’s no denying I was entertained.