In the biggest twist yet in a show packed with ’em, Charce turns out to be the clone of the king, raised to be a replacement body, not an individual person. When clones were banned, his mission changed: accompany the Space Camp and ensure they all die.

And yet, even having heard all this, Kanata isn’t ready to give up on Charce. He insists that if he really didn’t love and care about them, he wouldn’t have hesitated with the wormhole generator. But Charce has an exploration for that too: Aries Spring is the clone of the king’s only daughter, Princess Seira.

Seira was staunchly against being cloned, but her father did it anyway, cementing the king as a violating dickwad concerned only with everlasting life. She spirited her baby clone away with her surrogate mother, Emma, naming her the reverse of her name before parting.

A year before Space Camp, Seira and Charce were enjoying nature when a shadowy figure rushed out of the woods and shoved Seira off a cliff; an assassination made to look like an accident. The king threw Charce in jail where he rotted until a week before camp, when he was assigned his new mission: to die, and take the other illegal clones with him.

It’s fair to say Charce had the most fucked up childhood of the crew, and what makes him even more pitiable is that he believes his life has been wonderful, as long as he’s had a purpose; as long as he served his king. Kanata gives him a much needed punch; he can talk about his true purpose all day; he knows when someone is forcing or faking happiness, and Charce hasn’t been faking it.

But Charce’s mind seems made up; he produces a second wormhole generator from the right arm of his suit—a wormhole meant only for him. This isn’t about fulfilling a mission anymore, but punishing himself for betraying the only friends he had in the world (other than Seira).

Kanata stops the suicide attempt with another one of his athletic feats, jumping over the dang wormhole and shielding Charce from it. But he misjudged the distance, and Charce can’t turn off the wormhole soon enough. It swallows Kanata’s right arm, transporting it back to Earth orbit.

The moment Kanata’s arm disappears, the most pressing question is whether he’ll survive the injury. Quitterie doubtlessly saves a lot of his precious blood with her quick thinking and first aid, but he needs a hospital, and they’re still far from Astra. Charce regrets what happened, and Kanata tells him he’ll pay for it by being his second-in-command when he gets a ship. But right now, in Kanata’s present state, it sounds an awful lot like a death flag. 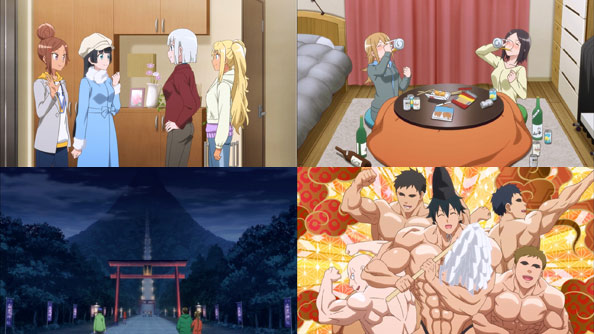 After a string of ten straight solid “8” episodes, the eleventh came off as somewhat sparse. As the teachers celebrate New Years Eve by drinking at home, the girls head to the Shrine of the Muscle God, which has a truly epic staircase for training purposes and is also maintained by none other than Machio. 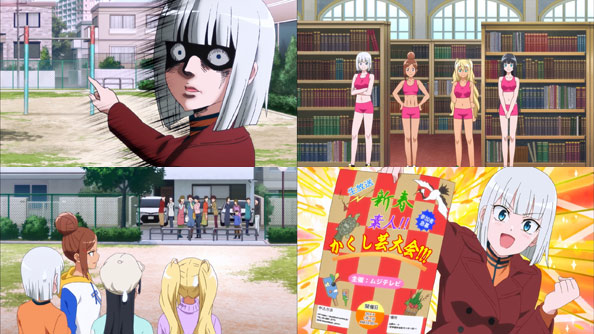 After watching the sun come up and descending from the shrine, the girls still have enough energy to train. Gina suggests they use the equipment at a local park, but to her horror (and my surprise) most of the equipment on which to train has been removed from most parks in Japan, so they do a number of isometric exercises that require nothing but their own bodies. Handy if you’re training (as I plan to do upon completion of this show) but lacking in excitement. 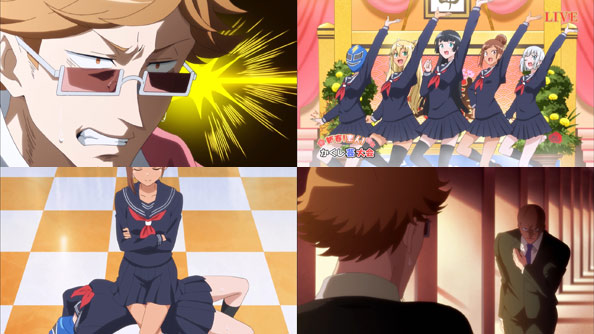 Gina tries to spice things up by registering the group for a live TV talent show (directed by Deire Kutarou, from the idol competition) but the sum total of their performance is some poses and a perfectly-executed “Wrestler’s Bridge” from a masked Satomi. Deire is surprised to find the girls boosted his show to second-best in the time slot, and the producer and president want to see more of them.

Jason shows up and takes Deire aside to propose a “Nikunoshima Tour,” whatever that is, which will be covered in the twelfth and final episode. But I couldn’t help but feel like this was the weakest of the Dumbbell outings so far; unlike the others it felt more meandering, even listless, like it was running out of gas. Hopefully the finale can restore the lost momentum and bring things to a satisfying close.