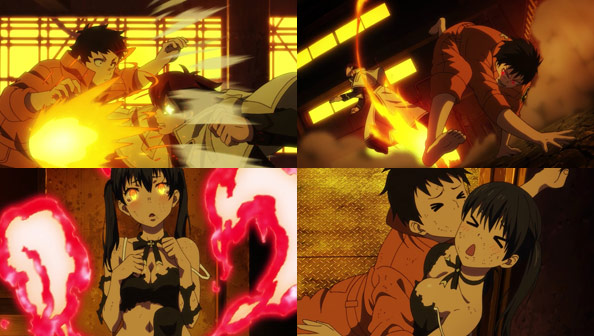 “Second Sun” was my other choice to name this review, though I went with “Decisive Battle” in homage to the best battle theme in anime history. And this was a decisive battle, in that it dispensed with the enthusiastic but ultimately one-note villain of Lt. Rekka as quickly and efficiently as he was revealed.

My other reason for recalling Eva’s battle theme is that both the music and the visuals took on a decidedly Eva-esque flavor, while Rekka’s rants were full of “Evangelists.” Of course, with all the crosses and creative expliosions flying around, comparisons have been in-Eva-table from the start. Sure enough, one of Fire Force’s storyboarders did key animation on Eva.

While Shinra is quite different MC from Shinji, his hot/cold, love-hate relationship with Tamaki echoes that Shinji and Asuka. Tamaki’s Lucky Lechery ability means Shinra always has a soft body to land on when Rekka blasts him back. Rekka’s flames also conveniently burn most of her clothes off, while Shinra’s jumpsuit is unaffected.

Still, having been unable to fight Rekka herself, Tamaki offers Shinra support as she urges him to do what she couldn’t. Shinra rises to the occasion, exploiting his superior mobility in the warehouse and delivering an unpredictable parkour-style offense to Rekka’s more conventional two-feet-on-the-ground strategy. The battlemation is, as ever, bright, bold, and beautiful.

The times when Rekka knocks Shinra back, he makes sure to rant more about what his cult is trying to do: make the Earth a second sun. It’s your typical “villain wants to burn the world down to make a new one” position, and Rekka goes all out despite the fact that his friend Karim has always had his back, and today is no exception.

The only difference is, instead of backing him up, Karim freezes him out, converting his overheated flames into an ice prison. Karim kept him alive, hoping to get more info about who he works for out of him, but a fire sniper (clever concept) shoots a round straight through the frozen Rekka’s chest, killing him, then starts firing at Karim, Shinra, Tamaki, and the kids.

Karim has Shinra put up a smokescreen and locate the snipers, then freezes Tamaki’s twin fire tails as they point out the sniper’s location, causing them to wig out and retreat lest they get exposed. Their main objective of eliminating Rekka as a source of information was a success, but Karim vows to assits the 8th’s investigation of the Evangelist in any way he can.

In an after-credits sequence, we find Shinra has returned to the 8th, with his inter-company training suspended after the Rekka incident. He’s glad to be home with his fam, but finds that two people are out of place. Arthur “got lost” during the incident, and they can’t find him (to be continued).  Tamaki, suspended from the 1st for her role in the incident, is now on the 8th with Shinra, no doubt to be a source of both glee and woe—hopefully more of the former.