Polina knows something’s up when the blue planet on the screen isn’t Earth, and that none of the kids know what “Earth” even is, because their home planet is Astra. Kanata jokes that Polina might be an alien, but he and the crew decide it best to compare histories.

That’s when they learn where their two histories diverged: in Polina’s, 1962 was the year of the Cuban Missile Crisis; in the crew’s, that crisis precipitated World War III, which resulted in half of humanity perishing. When it was over, countries and weapons were abolished, and a united planet rebuilt.

That brings us back to Polina’s history: there never was a World War III, but a little while before embarking on the journey that would strand her on Icriss, astronomers detected a 300-kilometer asteroid on a collision course with earth. That necessitated humanity packing up and migrating to a new world.

When Polina was on her mission aboard the Ark VI, they were still looking for planets, but six years before the present—and five years after she went into hibernation—the asteroid must have struck. By then, humanity had managed to successfully migrate…to Astra. The next generation, of which the Astra’s crew is composed, were told a vague alternate history and raised not to dwell on the past.

How, you ask, did they manage to move so many people? Why, with miniature artificial wormholes (duh), the very phenomenon that sucked up the crew in McPa and dropped them in orbit of an icy planet…a planet that turned out to be Earth itself, having gone into an ice age after the asteroid impact.

Now that they know the basic how of their predicament, Aries suggests the crew not dwell on the why, lest it bring down morale at a crucial time. Life returns to normal for the duration of the trip to the final planet, Galem. When they land on the planet to resupply one last time, Polina is duly impressed by the efficiency and know-how the crew demonstrates—this is not their first planet rodeo, after all.

Kanata and Aries reflect on everything that’s happened and how they’ve become stronger people during this whole adventure, no matter what the goal of the enemy was. Kanata also asks if he can walk Aries home to reunite with her mom; Aries accepts the offer. Maybe there’s hope for this couple after all, eh?

But while off on his own on Galem’s surface, a wormhole appears and starts chasing Kanata, who ends up finding refuge in a cave where Aries is gathering supplies. Later, Kanata confides in us, the audience, by stating he knows who the enemy is now, that the enemy doesn’t know he knows, and that he intends to make the first move before they can kill them all.

Kanata meets secretly with Charce and Zack and informs them that Ulgar is the enemy, and outlines the plan to entrap and capture him, with Charce serving as the bait. But when the plan of action is executed, Charce is alone with Ulgar, Ulgar pulls his gun but it misfires, and the wormhole is activated, it’s not Ulgar who Kanata takes down…it’s Charce.

The entire crew except Charce was in on the plan, and they are there when Charce is captured. A tearful Aries wants him to tell them that they’re, that she’s mistaken; earlier in the ep Kanata meets with Aries in her quarters, but he wasn’t there to confess. He wanted to know, in detail only Aries’ photographic memory could provide, who was sucked into the wormhole last. It was Charce, ensuring everyone else went in before him.

While his mission was to transport himself and everyone else from McPa to space to die, he didn’t count on everyone getting their helmets on in time to survive the transition, nor the pure dumb luck of the Astra, formerly the Ark XII, being in orbit so close to where they materialized.

As for who he really is, well, Charce is a clone too, but has always known he’s a clone…and not a clone of just anyone, but of Noah Vix, king of the Vixia Royal Quarter. Of course there could only be one king. One wonders if his friend Seira was a factor in his agreeing to complete this mission, and also make me wonder if, considering their resemblance, arieS is Seira’s clone.

Not only that, but what will happen now that his mission has failed, and the clones are returning to Astra? Not that things were ever not interesting on this show, but things are really starting to more interesting. And to think I initially thought this was a show that would kill its characters off one-by-one on a weekly basis…

It’s Wintertime, the Silverman Gym Christmas Party is coming up, and Hibiki, Akemi, Ayaka, Satomi and Gina want to use the even to snag some guys Hibiki isn’t quite in the shape she wants to be due to overindulgence in delicious winter foods.

Machio suggests she try lying triceps extensions, or “skull crushers,” and Hibiki makes what must be a common mistake with any workout that brings a metal bar that close to your head. Still, by cramming in workouts prior to the party, Hibiki hopes to be the first among them to bag a boyfriend.

The big night arrives, and the young women arrive in cosplay in order to apply for a free training session. They fan out and mingle with all the handsome, fit young men who attend the gym at different times, but quite adorably none of them are quite bold enough to ask for any numbers.

Speaking of numbers, Machio drew them all over his muscles as a novel way to reveal the winners of the gym raffle, the first place prize for which is a pair of tickets to an amusement park, which Satomi wins. While posing with the other winners, she and the girls learn that beneath their slimming casual clothes, the lads are all macho-men like Machio. 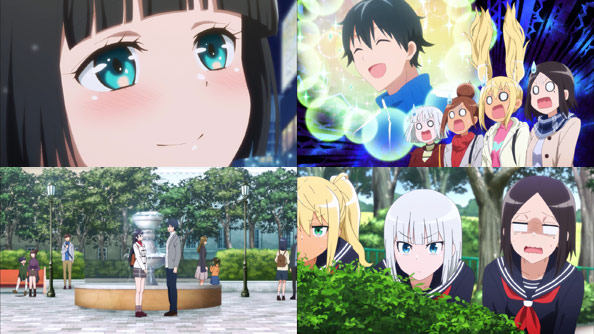 That also means most of them are spoken for, so it would seem their mission to snag a boyfriend failed. When Satomi can’t use the tix due to Winter Comiket approaching, Akemi asks if she can have them…and asks Machio to join her! The ladies are shocked.

When Akemi and Machio meet up at the very not-Disney-affiliated-at-all “Tochigi Destiny Land”, Hibiki and Gina decide to trail the pair, while Satomi ends up coming along, wearing the same winter uniform as the high schoolers in order to hide in plain sight.

Part of me wished the tix were for Amagi Brilliant Park, but then I would not have met TDL’s mascot, Mockey, whose appearance Satomi’s inner thoughts sum up quite succinctly. 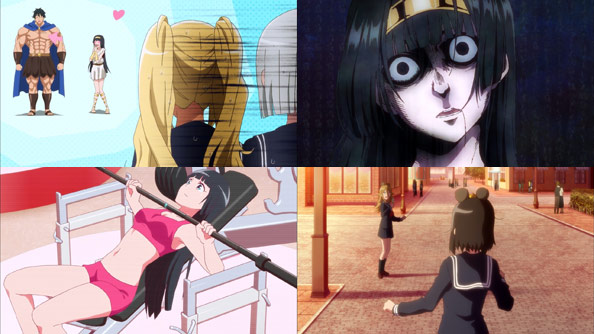 While observing Akemi and Machio reveals that they’re simply on a normal innocent date, things take a turn when the two suddenly sneak into a suspicious tend. However, the true reason for them coming to TDL is revealed: they’re there for a cosplay event.

Specifically, Akemi is there to see Machio’s sweet, sweet pecs (honed by the incline bench press), which, as she explains while temporarily transforming into Sawako, look even better when juxtaposed with leather armor. Finally, Satomi is skipping about in a high school uni without a care in the world until she runs into someone she knows, specifically her fellow teacher Aina, who is also wearing their school’s uni. They vow to pretend this never happened, but I remember, senseis…and I won’t soon forget!