After a four-year pause, DanMachi resumes, starting with Cranel and his party (Lili, Welf, and Mikoto) on thirteenth floor, taking care of business. The baddies are threatening; the action is smooth, slick, and packs a punch. Mikoto is a nice addition with her lightning-quick, multidirectional katana strikes. 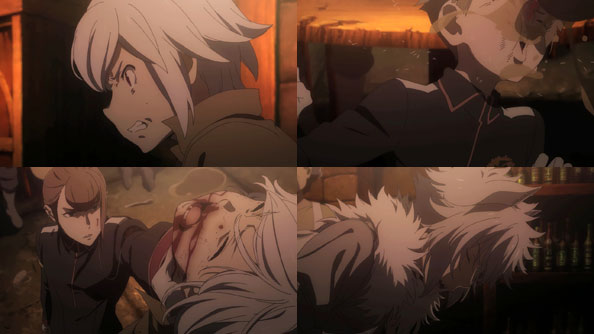 While unwinding at the tavern, talking about the future of this party full of members of different Familias, Bell is suddenly verbally accosted by a young pipsqueak, backed up by a group of his friends all wearing the same military uniform: that of the vaunted Apollo Familia.

He says a couple of the wrong things about Hestia, and Bell gets mad, but it’s Welf who stoves in the kids face with a flagon. One of the kids’ much tougher (Level 3) friends quickly rearranges Bell’s face and nearly chokes him to death; he’s “saved” by Bete, complaining about the noise.

Hestia, ever the goddess of warmth and kindness, is proud of Bell for fighting for her name, but impresses upon him how sad she’d be if he got hurt again for her sake (Lili tends to Welf).

The next day, after reporting the fight to Eina, Bell is approached by two Apollo’s children—Daphne and Cassandra, whom I’m sure we’ll see later—who present him with an invitation to a Banquet of the Gods.

Since Hestia and Apollo have a sour history (she rejected his offer of marriage—Poseidon’s too—choosing instead to remain pure), there could well be some unpleasantness, but Hestia is excited nevertheless, in part because she gets to take a child plus-one. 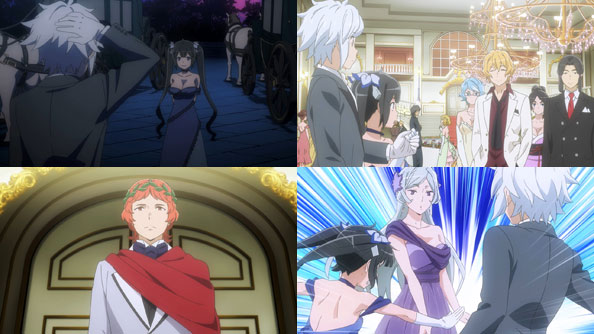 It’s an occasion when everyone gets to show off how nicely they clean up, and while his hair remains stubbornly messy, even Bell looks pretty damn dapper in his tux.

It’s also an effective way of re-introducing all the gods, goddesses, and children after a long hiatus. Still, it’s hard to feel easy at the house of Apollo, the Familia Bell & Co. “disrespected” so recently. You can’t trust a god with children that…sophomoric.

Hestia and Loki snipe at one another as Bell and Ais give each other eyes, but neither has the guts to defy their goddess right in front of them. Even so, Bell lingers a bit as Ais walks away, and once he turns his head, Ais turns back too. Though members of different Familia, particularly those whose gods don’t like each other, don’t often mix, Bell and Ais clearly don’t feel that way.

While out on the balcony, Bell spots the Apollo child who almost killed him talking to someone and gets suspicious, but is saved from locking eyes with him when Hermes shows up and, after hearing Bell explain why he became an adventurer (at least in part to meet cute girls), steers him in the direction of one with whom Bell should dance.

A completely unexpected but utterly delightful dance scene between Bell and Ais ensues, the two looking absolutely killer in their classy duds, but looking even better because of how much goddamn fun they’re having dancing with each other.

I was gradually reminded of a similar dance scene in FFVIII (that was top-notch CGI in 1999!), starting out awkwardly but becoming smoother as the two grew more comfortable. Even if it was shameless bait for AizBell shippers, I don’t care; it was freaking beautiful and I loved every moment of it!

Unfortunately, the episode’s crushing low immediately follows its dizziest high, as Apollo pulls the plug on the pleasantness and reveals his resting crazyface. Yep, he’s one of those…gesugao or whatever…

Previously described as “spiteful”, he demonstrates he’s petty too, calling Bell and Hestia out for the bar fight his children started, then using it as a transparent excuse to challenge Hestia to a “War Game” between their Familias. And if he wins, he’s claiming Bell.

And there you have it: one of the littlest Familias (but sporting the biggest heart in that of Hestia) going up against one of the biggest, most powerful and militaristic. Assuming allowing outside help (like Ais, for instance) is forbidden, Hestia, Bell and Lili will surely have their work cut out for them!