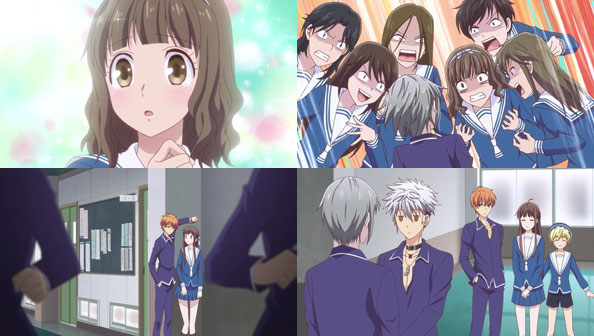 This episode starts out so harmlessly…and silly. It’s a new term, Tooru, Yuki, Kyou, and the others are all second years, and the new first year girls are extremely aggressive in making their existence known to Yuki. Tooru is targeted as an “easy mark” by first year boys, and Kyou scares them off with a move that hilariously befuddles her. New first years Momiji and Haruhatsu brazenly flout the dress code: Momiji by wearing half of a girls’ uni; Haru with jewelry and white-over-black hair. 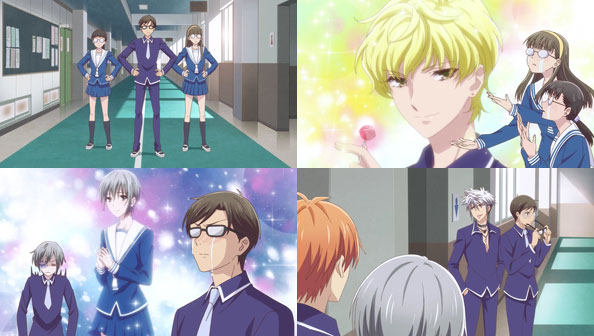 They are immediately singled out by StuCo President Takei Makoto, who seems like a character from another show, even if FB is not above slapstick. This bespectacled dingus has a thing for Yuki, and his two nearly identical female lieutenants are soon won over by Momiji’s cuteness, while Haruhatsu proves he didn’t illegally die his hair by showing him his pubes in the men’s room.

Unfortunately for this half the episode Tooru is just kind of off in the background as all these Soumas bicker and test authority. I’m well aware Tooru was not always the focus of the source material and in some cases was totally absent as the cast expanded, but the broad goofy comedy on display here doesn’t really make a strong case for keeping her out of the anime spotlight. 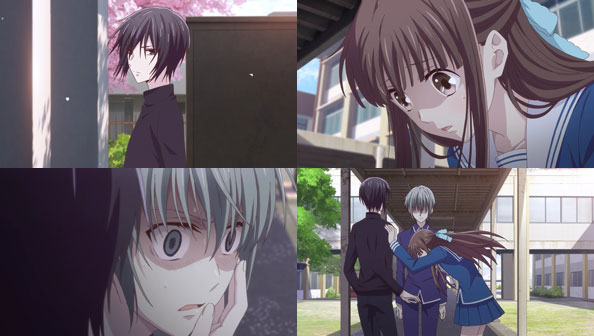 Tooru does not play a small role in the second half, when she’s confronted by none other than Souma family head, Akito (voiced by Sakamoto Maaya in her best honey-poison imperiousness). Tooru is caught totally off guard by the sudden and very casual encounter, and Akito never says a single thing I am inclined to either take at face value or believe.

The one person Yuki doesn’t want near Akito less than himself is Tooru, so he comes to her rescue, only to be utterly neutralized by Akito, who after all threw him in a dark room and psychologically tortured him for years until Shigure finally put a stop to it by letting Yuki live with him.

So it’s up to Space Cadet Tooru to rescue Yuki-hime, demonstrating quicker thinking than would usually be expected of her in explaining an action that could’ve cost someone else their life (shoving Akito away from Yuki). In the moment, she knew Yuki was in pain, and she did what she had to do to stop it. 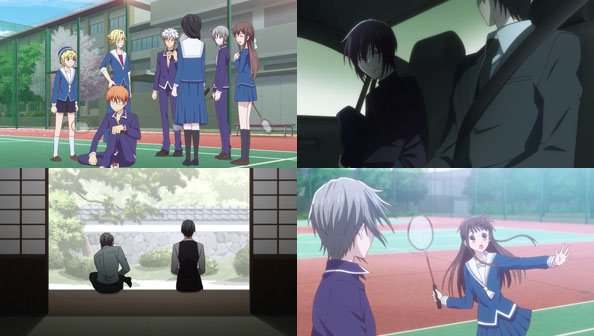 In his report to Hatori about the car ride home, Shigure says Akito would later call Tooru “ugly” and not a threat to him, assured that one day Yuki would come crawling back, citing his fear of him as proof. But Akito seems like the kind of person whose threat assessments vary from day to day, or mood to mood. In any case, Tooru is far from safe, nor is Yuki.

Still, Tooru tries to refocus a clearly traumatized Yuki by joining a big ol’ badminton game with the gang. She doesn’t want to waste, or let others waste, the precious time they have, and she has no illusions about that time being infinite, or even indefinite. Something cold could come out of the shadows and freeze these poor warm people and warm life in which they’ve never been happier. But not today. Today, for a little while, they’ll forget their fears and have fun volleying a shuttle around.