With the discovery of the hourglass in the underwater temple, Naofumi now knows another Wave will arrive in 48 hour’s time. Fortunately, that’s enough time for him to teleport back to Melromarc and warn the queen, who quickly mobilizes a fleet of ships.

I’m not sure how she arranged things so quickly—unless such ships are on 24-hour standby—nor do I know how they know the next Wave will be at sea, but it is, and when they all teleport, they find themselves contending with monsters large and small.

The small fry are no problem for the soldiers, and Melty, who still considers herself part of the Shield Hero’s party, does her part, until one of the monsters grabs hold of her and threatens to drown her in the sea or worse. That’s when L’Arc Berg springs into action, demonstrating his impressive offensive power by eliminating scores of the beasts. 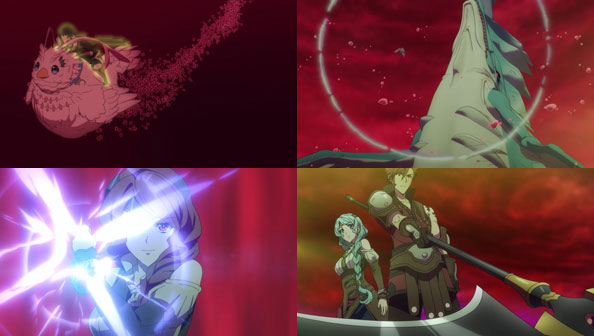 The giant leviathan sub-boss is a far tougher nut to crack, but a leveled-up Naofumi, Raphtalia, and Filo along with their new friends L’Arc and Therese press their attack and manage to kill the thing. There’s some great battle music to accompany their fight, complete with saxophones.

But once the sub-boss is dead and floating in the water, and the other three Heroes come to pick up rare drops (vultures), the mere mention of them being Heroes gets a weird reaction from L’Arc, who says if they’re joking about being Heroes, they’re not funny.

Turns out he and Therese aren’t ordinary elite adventurers from this world, but full-fledged Heroes from another world entirely. In order to save their world, they have to eliminate the heroes in this one, starting with Naofumi. It’s nothing personal—Therese feels horrible having to do it after all of Naofumi’s help—but do it they will.

As predictable a twist it was that L’Arc and Therese would end up powerful new foes of Naofumi & Co., I do appreciate that they’re not evil, nor do they have any petty beef with Naofumi, they’re just doing their duty as protectors of their world; apparently one world cannot be saved without condemning the other.

In any case, the fight between the former allies is appropriately intense and impressive. Not only do L’Arc and Therese not hold back, but Raph and Filo show just how much more powerful they are now that they were finally able to level up.

Also, L’Arc may do what most cliched villains do and explain his tactics to his opponent, but he does it in the name of fighting Naofumi “fair and square,” Naofumi is similarly transparent in the service of playing psychological games with his former buddies. 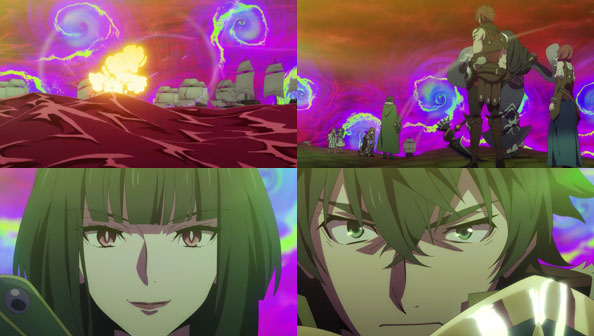 Ultimately, the fight comes down to a stalemate: blows have been dealt to both sides, but no one’s in terrible shape, and have plenty left in the tank. That’s when Glass makes her second explosive appearance, revealing herself as allied with L’Arc and Therese and a member of their world. Perhaps she’s a Hero as well?

In any case, she accuses her allies of wasting time playing around and launches the same attacks against Naofumi that very nearly did him in in their previous match. She’s pleased to see that his skills have improved since then, but warns him that they still won’t be enough, as those attacks are far from her worst, and she’s totally committed to personally erasing him.

While I thought this season would go out with a whimper, here we not only have a new Wave, but a paradigm shift in the structure of the plot, with a heightening of stakes and urgency. This is no longer a binary matter of saving or not saving this world; it affects other worlds as well, with other sets of dedicated Heroes whose goals don’t align with theirs.

The final episode is titled simply “Rising of the Shield Hero”, so it’s a good bet Naofumi won’t lose next week (that would be a fall, not a rise), but it will be interesting to see what he and his friends will have to sacrifice in order to fight off Glass, L’Arc, and Therese,  and where they go from there.