That meek, soft-spoken girl at the door who wants to see Ryou? Uh, she’s not so meek once she sees him for the first time in four months. She delivers upon him a beatdown the likes of which we’d yet to see if this series, far beyond his sparring with Yuki. Turns out that’s just how Souma Kagura expresses her affection…with extreme prejudice. Her two-sided personality is voiced by the supremely talented Kugimiya Rie.

Kyou’s two years older, self-professed fiancee (based on a promise he made at knife-point when they were kids), Kagura demands to know where she stands, and doesn’t like how there’s another woman living in his house, albeit one who can’t hug him without making him turn into a cat. Since they’re both Soumas and Zodiac animals, she can hug him freely. 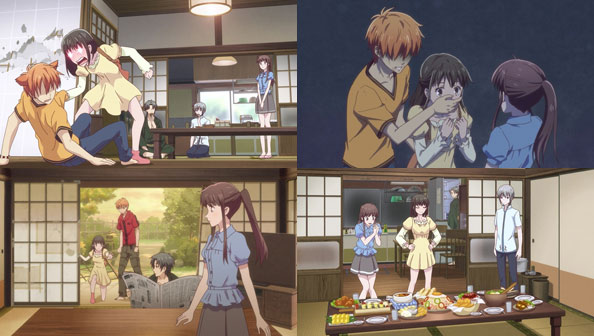 Kagura is clearly much stronger than Kyou, and so basically rolls himself into a ball and endures her savage beatings, but he dares to silence her when she starts mentioning his “true form” to Tooru. As someone who hasn’t yet found her first love, Tooru can’t help but feel a little jealous that Kagura loves someone as deeply as she does.

Repairing the substantial damage to Shigure’s house takes up much of the day (especially with Shigure and Yuki pointedly not helping), and before long, Kyou’s stomach starts to grumble. Tooru offers to start dinner, as is routine, but Kagura stops her in her tracks. Tonight, she’ll be the one to feed her beloved Kyou. The resulting feast reduces the food supply in the fridge to nothing, but as seems to be Kagura’s M.O., she got a little carried away.

As good as the food looked, part of me expected it to taste vile or some such, but nobody even gets to eat any of it, as Kyou snaps at Kagura when she says it’s ready, and she responds by driving him through the floor and onto the feast, ruining it all. With no other food to cook, Kagura heads out to the grocery store in a huff.

It isn’t until she’s at the checkout that she realizes she left her purse at home, but Tooru bails her out by paying for her, and the two women walk home together. When asked, Tooru specifies her “love” the sign of the Cat more than overt romantic love for Kyou himself, and is “humbled” by the extent of Kagura’s love.

Here we have another example of Tooru not judging someone as volatile as Kagura, but rather believing in her and her long-standing love for Kyou. Kagura in turn thanks Tooru for coming for her, and the two make hamburger steaks together. This time, when everything is ready, Tooru climbs up to the roof to tell Kyou.

Up there, she tells him how lucky he is that someone cares for him and worries about him so much—not surprising, coming from someone who was loved by her parents, but lost them far too soon.

She also brings up peoples’ dreams, whether Kagura’s dream of marriage to someone she can truly embrace, to Kyou’s love of martial arts. Tooru sees another side of Kyou as he lights up talking about martial arts. It’s clearly not just about beating Yuki, but becoming better and better at it. 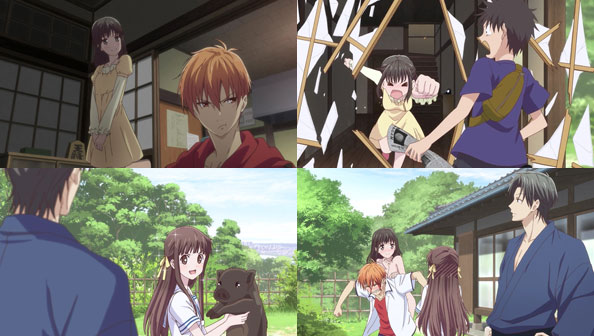 When Tooru gets Kyou to come down to eat, Kagura presents him with a hamburger steak a little different from the others: his has a fried egg on top, like the fried egg he was drawing in the sand when they first met, which was when Kagura basically fell for him. Kyou tastes his dinner and through his sheepish silence expresses his approval and thanks.

The next morning, Kagura has to leave, and bids Kyou farewell with a big hug, followed by one last beatdown. Kyou says some unkind words, and Kagura responds by punching through the front door…and straight into the chest of the paperboy.

Yuki manages to distract the civilian, but Tooru finally learns that Kagura is the sign of the Boar—very appropriate considering her propensity for charging headlong towards her goals. When Tooru compliments her as the cutest boar anyone could ever ask for, she transforms back into a woman—a naked woman, on Kyou’s back.

That brings us to a cliffhanger that threatens the relative peace of the last four episodes, as well as the status as Tooru’s new home and life. She gets a call from her grandfather, and the contents of the message are enough of a shock for her to drop the gardening books she checked out. Is Tooru doomed to lose everything once more, after an all-too-brief taste of happiness?