When Kyou, Yuki and Shigure all transform into animals, Tooru panics, right up until the dog signs for a package with his seal, and they start talking with human speech. Turns out each member of the Souma clan is possessed by an animal of the Zodiac, and when hugged by the opposite sex, they transform into those animals for a time, eventually changing back to (buck naked) humans.

To call Yuki and Kyou like oil and water would be inaccurate: oil kinda just sits on top of water. Yuki’s more like sodium and Kyou water; it always ends up with an unpleasantly violent explosion. Once’s everyone’s dressed they go at it again, and Kyou breaks a table in his rage, accidentally injuring Tooru’s forehead. Yuki has had enough, and decides to show why sparring with Kyou is never fun for him: he always wins handily.

At school, suspicions from Yuki’s fan club persist, but he doesn’t pay them any mind, and meets with Tooru in an empty classroom, asking if she told anyone about “them.” Tooru takes this to mean the Souma family secret of animal transformation, but it could just as easily be asking if Tooru told her friends she was now friends with Yuki and living in his house.

Regardless, Yuki informs Tooru that Shigure has to report to the Souma family head, Akito, who will determine what if anything is to be done about Tooru knowing, up to and including memory-suppressing hypnosis. Tooru accidentally bumps into him, turning him into a rat, but once the shock of that is over, Tooru expresses her wish that even if her memories do have to be altered, she’d like to still be friends with Yuki afterwards.

Back home, Kyou is making preliminary repairs on Tooru’s ceiling, and is about to offer some kind of apology when Shigure returns home with good news: as long as Tooru keeps their secret, she’s free to live there without any memory modification. Tooru celebrates by putting her well-honed cleaning and cooking skills to use. That night, she learns Shigure has arranged for Kyou to transfer to Yuki and Tooru’s school. 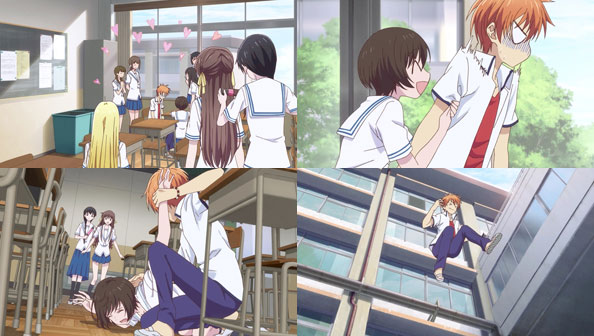 The reason for this is because he essentially dropped out of the school he was attending to train his body and mind to defeat Yuki, and he could use a fresh start to learn more about interacting with people in ways other than confrontation and combat. True to his Zodiac sign, this is better said than done.

He causes an instant sensation at school, as the girls flock to his desk to chat with him. Not used to so much attention, he tries to get away, but one of the girls clings to him, and he puts her in a painful arm lock before jumping out a high window (and landing on his feet, natch). In other words, not a good start!

Outside, Yuki tracks Kyou down and scolds him, and their two diametrically opposed goals are made plain: Kyou wants to work to become a full-fledged member of the Souma clan, something Yuki considers a cage he’d rather escape.

The fight gets heated, and Tooru intervenes, resulting in Kyou transforming into a cat. The enraged Kyou snaps at Tooru once more, and she slinks away, believing Kyou truly hates him. Yuki doesn’t even bother punching him.

Back home, Shigure tells Kyou it’s simply not going to be easy, but he has to keep going to school, and consider it training. That means hurting, being hurt, and developing empathy that informs his future words and actions, not just going with his impulses. 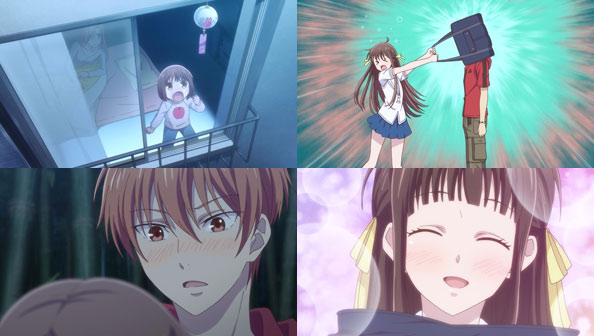 As Tooru walks home from work later that night, she remembers her vow to her mom to cease being a Dog and become a Cat in solidarity for the way the Cat was treated in the Zodiac legend, but now that she’s met the Cat, he seems to hate her. Of course, that’s not strictly true; Kyou simply isn’t sure how to act around Tooru yet, and takes Yuki’s place as her escort home as an olive branch.

He snaps at her again once or twice, but takes the advice from Shigure—not every strike, verbal or physical, needs to be carried through. He can stop short; hold his tongue or fist; consider a less extreme response. He tells her she can call his name even if she doesn’t need anything, can hang around where he can see her, and she’s welcome to hit him if she says or does something she doesn’t like. It’s his way of apologizing, and it lifts Tooru’s spirits considerably. She tells Kyou about her love of the Cat, and her desire to be friends with its vessel.

Kyou reacts somewhat like a tsundere would, and Tooru feels she finally understands Kyou has a gentle heart under the rough exterior. Having thus made peace with Cat and having official permission from the family head to live with Yuki and Shigure, Tooru is looking forward to fun-filled days ahead. Here’s hoping she gets them; she’s already experienced enough of the other kind.