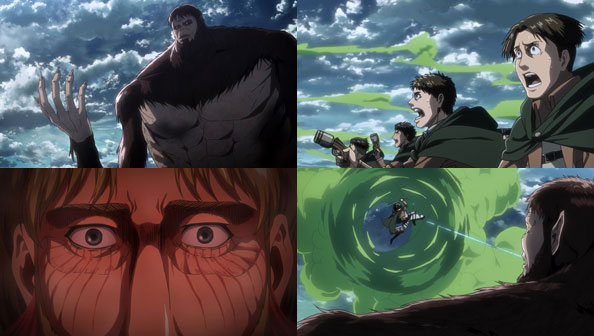 This week the Beast, Armored, and Colossal Titans were so sure time was up for the humans, they neglected to detect the diversions that led to their own demise. Beast Titan is having so much fun tweaking his pitch delivery to kill Erwin and his desperate cavalry charge, he fails to see why they keep shooting nothing but green smoke at him.

That green smoke hides the fact that all of his Titans to one side have been felled by Levi, who then comes for him. Bertholdt and Reiner warned Zeke about the one human he had to worry about, but by the time he’s finally face-to-face with that human, the Beast Titan is toast. Levi carves him up like a Christmas goose.

Levi’s victory is snatched away by the “crawling” Titan, who grabs Zeke’s body before Levi can find anyone to turn into a Titan so he can eat Zeke and gain the Beast Titan’s powers. Levi gives chase, still committed to keeping the promise he made to Erwin. The only survivor of the cavalry charge is still alive, but not sure why. Will he be the one Levi gives the serum to, or will there be someone else near death who needs it more than this guy? 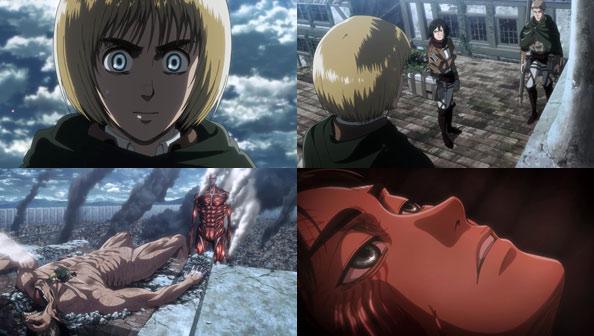 Inside the walls, Armin finally has a plan, to the relief of Mikasa and Jean. He’ll wake Eren up to fight Bertholdt, while Mikasa, Jean, Conny and Sasha will deal with Reiner. His plan revolves around the fact that the Colossal doesn’t do well in a battle of attrition, since the amount of steam he can produce is finite, making him thinner and thinner.

Reiner may be alive, but he’s signifcantly weakened, and still isn’t aware of the Thunder Spears, one of which takes out a knee and halts his advance. They need to get his mouth open, but while Conny’s spear finds its target, Sasha misses and is ijured. Armin wakes Eren up, but Eren ends up falling off the wall; Bertholdt is convinced he’s concussed and in no condition to fight, and that Armin is rushing him in a last-gasp suicide attack that will fail.

When telling Eren his plan, Armin reminds him he’s never lied to him, and that they’re going to see the sea together someday. However, this was actually the first and only time Armin was lying; in order to defeat Bertholdt, he had to stay in front of his face—and the tremendous heat from his steam attack—as long as possible, incinerating him in the process.

Back at the Armored battle, Hange swoops in to complete the destruction of his jaw, enabling Mikasa to land on his tongue and fire her thunder spear down his throat, forcibly ejecting the very weak and vulnerable Reiner.

With Armin killed, Bertholdt looks down and notices Eren’s Titan has fully hardened. Just then, Eren swoops in from behind, cuts the Titan’s nape open, and rips Bertholdt out sans arms and legs. The Colossal Titan darkens and falls. With all three main foes defeated, it should be a great victory for the Scouts and humanity.

But there are so few left to savor that victory, and Armin was an irreplaceable friend and tactical asset. I honestly can’t believe they offed one of the three main characters, but his life ended triumphantly the same way Eren first met him years ago: not losing by never running.