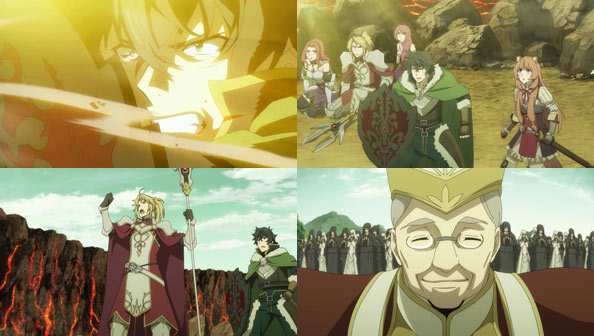 The Pope packs a whallop with his attacks, but turns out the first couple were just “trial runs”, to unleash the full power of the weapon he transforms it into a spear and draws upon the mana his holy army of followers, who number in the thousands despite not having any kind of supply train. Did these people just walk out here from wherever they came from without provisions of any kind? Seems like a logistical nightmare. 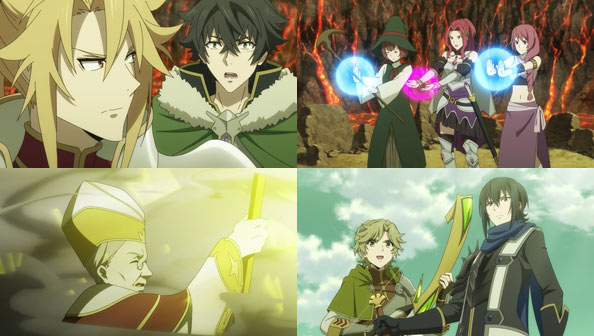 That weapon turns out to be a replica of the Cardinal Heroes’ own weapons, able to transform as needed. Melty is shocked to learn it still exists, believing it had been lost long ago, while Motoyasu condemns its use as “cheating.” As for Naofumi, he asks why, if they could make such powerful weapons, did they bother summoning heroes at all?

However, Motoyasu’s weapons, nor combo attacks by him and his party, have any effect thanks to Popey’s magical barrier, which enables said Pope to laugh and bray on about delivering judgment and such.  What he didn’t count on, however, were the Sword and Bow Heroes not being dead after all.

Turns out Itsuki and Ren never trusted the Three Heroes Church, and were investigating it when they learned that the church had possession of the weapon. They were led to a false shrine where the church tried to assassinate them, but failed. Now, with all the four Cardinal Heroes, assembled, it’s time to turn the tables as one unit…right?

Wrong. Naofumi isn’t fighting with other three. Not after the shit they gave him and the trouble they caused which he and his party had to clean up. And who can blame him? They’ve demonstrated they’re no better than the Pope, taking and doing whatever they want without regard to the lives they affect. 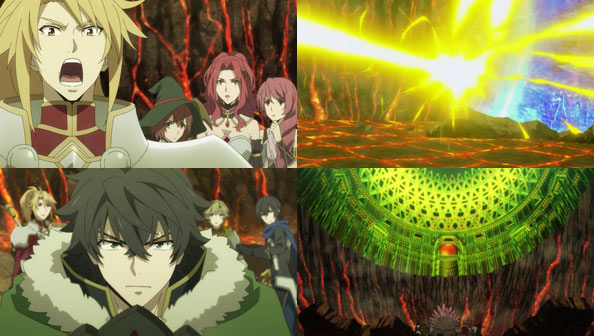 This results in roughly six minutes of the heroes bickering among themselves and pointing fingers before Naofumi finally gives in and joins the others, but only until they deal with the Pope and the Queen’s Shadow Punitive Force arrives (which, by the way, where the hell have they BEEN?), and because he promised Fitoria he’d at least try to make up with the other heroes.

However, by the time they’re ready to fight as one, The Pope has already prepared “Cathedral”, a high-level spell that encases the entire crater in a magical barrier that he maniacally declares will be their “final destination.” Somehow I doubt that. I have to say, I’ve had quite enough of our ambitious pontiff and his seemingly infinite supply of mana.

But at least his actions led to the other three heroes finally learning not only how wrong they’ve been about Naofumi, but how harmful their own actions have been. Here’s hoping the lessons stick, even if the alliance is only temporary.