This week is a clash of numerous parties with conflicting interests, first among them Crazy Shark Boy, whose shark brother Jiroumaru eats the other shark and becomes a demon with legs. Dororo seems totally hosed until Hyakkimaru arrives in the nick of time to save him.

This demon Jiroumaru is a nasty customer, but no where near the toughest Hyakki has had to deal with, and so he’s able to dispatch him without much trouble.

I love his reunion with Dororo, pinching his cheek and touching foreheads as a sign he’s glad he’s okay. Dororo’s many morphing facial expressiosn and tsundere reaction (“took you long enough!”) are all priceless. Hyakki also gains back his left leg. 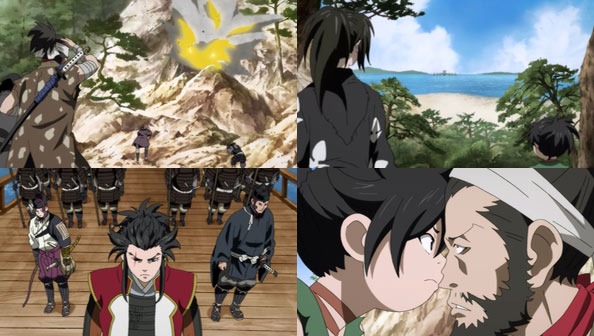 With the dynamic duo back together, the next item of business is catching up with Itachi and his crew before they find and steal Hibukuro’s treasure. But they run into a snag: the entrance to the cave containing said treasure is booby trapped.

If this weren’t enough going on, a small Daigo flotilla suddenly arrives at the cove with Tahoumaru, Mutsu and Hyougou ready to wreck up the place. Dororo and Itachi put their heads together (literally), but Hyakkimaru suggests they use explosives to divert the Daigo samurai. 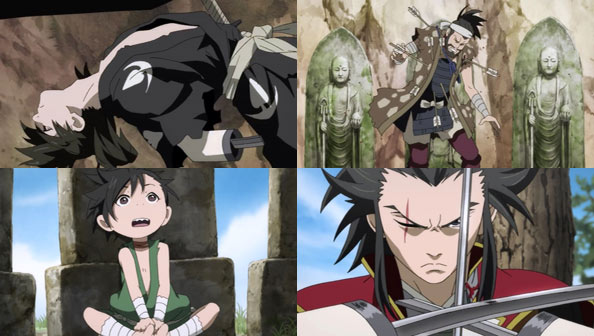 Itachi and what’s left of his men escape as Hyakkimaru battles Tahoumaru and Hyougou (at close range) and Mutsu (long range) at once; and before he knows it his right arm blade has been snapped off. Itachi becomes a pincushion for arrows shielding Dororo behind some Buddha statues, which Dororo accidentally topples onto advancing samurai.

If anyone held out any hope Hyakki and Tahou could work out their differences, well…hope no longer. It ain’t happening as long as the latter consider’s the former’s mere existence a threat to the people of Daigo.

Crazy Shark Boy comes back into play when he stands atop a cliff with a pile of grenades, setting them off in a final suicide blaze of glory to destroy those who killed his beautiful sharks.

The blast injures Hyougou gravely, and Tahou, Mutsu, and the Daigo samurai withdraw, while Dororo and Itachi fall into the very cavern where Hibukuro’s treasure is located. Itachi gets the glimpse he wanted, then dies with a smile on his face. 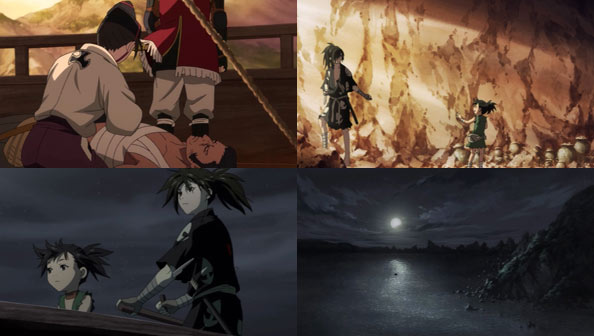 With all immediate threats either eliminated or temporarily withdrawn, Hyakki finds Dororo in the cavern, but Dororo doesn’t yet know what to do with the gold his father entrusted to him. That’s not surprising; he’s still a kid, and a kid who has never seen so much money. So he takes only as much as he can comfortably carry (for spending money), and continue his adventures with Hyakkimaru until he does.

The two arrived at that god-forsaken cove separately, but leave it together once more; a family of two, surviving the myriad dangers wrought by the greed and treachery of Itachi, the holier-than-thou hypocrisy and military precision of Tahoumaru & Co., and the pure insanity of Crazy Shark Boy (RIP). Meanwhile, Hyakki’s restored parts grow more numerous, no doubt the fortunes of Daigo will continue to fall.