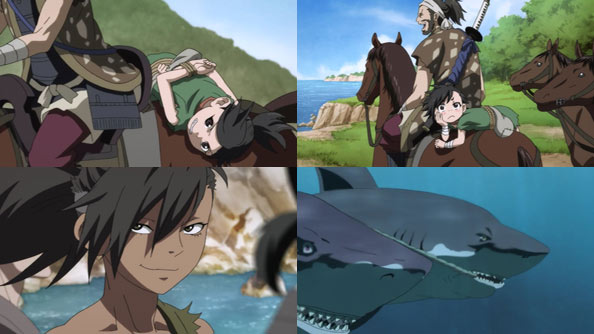 I wish that instead of a large trove of gold that continues to paint a literal target on Dororo’s back, his dad’s “lifelong ambition” could have been something as simple as giving his daughter he raised as a son a safe and comfortable life. That would have meant setting aside larger ambitions like rebelling against the samurai, but it would prevented Dororo from living such a hard life, and from being in his current predicament: captured by his dad’s former No.2, Itachi.

Itachi dug up Dororo’s mother’s remains and found half of the map, and he believes her son has the other half, if not on his back then in his head. To that end, he takes Dororo to the cove where the treasure was stashed, and makes his latest in a long line of mistakes: trusting a crazy-eyed one-armed sole survivor of a village, whose self-proclaimed family consists of two giant sharks. Did I mention he fed them his arm, and has made a habit of feeding him live humans?

Dororo warned Itachi not to trust the kid, and of course, Dororo turns out to be right. One of the two boats carrying half of Itachi’s men is capsized, and its occupants eaten by one of the sharks. He promises to return at sundown to finish off the other half, including Itachi and Dororo, and orders one of the sharks to keep watch.

Itachi—now a brigand again after being double-crossed by the samurai he double-crossed Hibukuro to join—quickly loses hope in getting out of this alive, but Dororo loudly admonishes him, using his own shit life so far as an example of the importance of keeping one’s head up and not giving up even when death seems close. Itachi notes that Dororo sounds like his old man.

If he spoke too many words “for a little runt”, Dororo decides to be the first to take action. He dives fearlessly into the sea to lure the shark guarding them, then leads him to leap up by the side of the boat where Itachi and his men are ready with swords.

It’s an audacious gambit to be sure; not sure quite how Dororo doesn’t get himself killed in six different ways, but hey, I guess that’s why he’s lived so long without parents up to this point: he’s good at surviving. Unfortunately, the sharks are often somewhat poorly drawn and animated, which blunts the impact of the action.

When the shark’s “brother” returns and finds the shark slain on the coast of the cove, he’s caught in an ambush and then viciously beaten. His life is only spared because Dororo insists, but that could prove a bad move if the guy, who is let go and vows revenge, considers Dororo to be one with the brigands who killed half his family.

Meanwhile, Itachi insists Dororo spill the beans about the exact location of the treasure. When Dororo lets slip that even if he knows where it is he doesn’t want to reveal it (believing whatever Itachi does with it beneath his father’s legacy) Itachi has him stripped down and learns that he’s biologically a she. The heat of the fire then reveals the map on Dororo’s back, and Itachi traces it and heads off with his men, leaving Dororo tied up.

Where is Hyakkimaru in all this? While he sees the trail Itachi’s horses made, his makeshift leg slows him considerably. So it’s fortuitous he comes across a stranger who tells him there’s someone around who makes new limbs for those who have lost them. That’s right: Jukai’s back. Assuming Dororo and Hyakkimaru remain separated most if not all of next week, I suspect Hyakkimaru will be reuniting with the man who first gave him a functional life—the closest thing to a father he ever had.