Accelerator has a distinct “oh great, what now” kind of attitude in Russia. The dramatic arrival of his latest opponent, “Misaka Worst,” doesn’t help matters. Back at Elizalina HQ, Vento starts her duel with Fiamma by summoning a giant ice galleon that flings him across the street. She breaks out her tongue-mounted weapon to fire blow after blow at her fellow Right-Hander, and it looks like this is going to be a cakewalk for the enemy of Touma’s enemy.

It’s, um…not. Fiamma is just letting Vento beat on him. When he actually gets serious with his creepy right hand and decoder cylinder thingy, Vento doesn’t have a chance, nor does anyone else, apparently. He rips the stud right out of Vento’s tongue and vanishes it before grabbing Sasha and withdrawing, promising he’ll be back for a helpless Touma.

To be honest I don’t quite understand exactly what Fiamma’s power is, but suffice it to say if he can do this to the likes of Vento, he’s going to be serious trouble! Before he goes he asks Touma if the way he’s been treating Index all this time, while knowing what she really was, is actually the right way. I’m going to go out on a limb and say that yes, Touma indeed believes his way is right, while the nutso quasi-angel dude’s way…ehh, notsomuch! 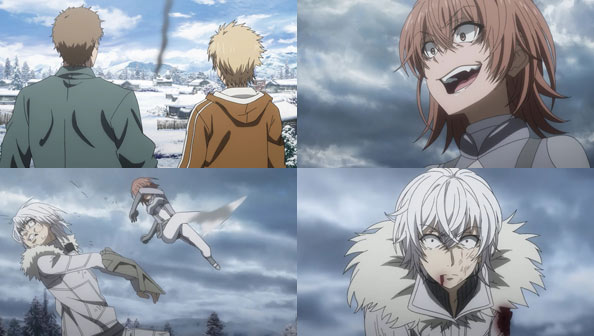 We have a quick check-in with Shiage at the village. The doctor doesn’t have the means to treat the effects of the Academy City drugs that are causing all the trouble for Takitsubo, while Russian-backed privateers appear on the horizon, poised to level the village. Shiage is not having a great time, and isn’t sure why he came anymore, but if there’s a village that needs protecting, I’m sure he’ll help in any way he can.

The balance of the episode is the duel between Accelerator and this extremely pissed-off Misaka clone, who seems to carry the combined animosity of all the thousands of Sisters he killed in the past. Like Vento against Fiamma early on, it’s a one-sided affair, with Accelerator loath to lay a finger on another Misaka after promising never to do so again. 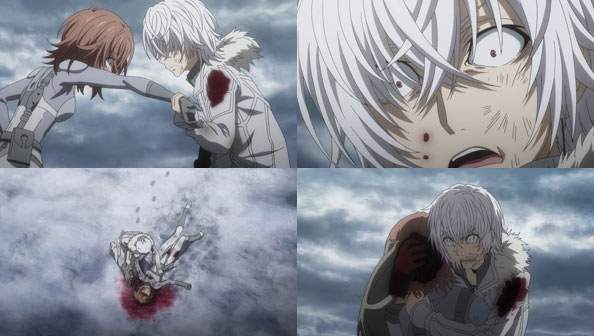 But when Misaka Worst threatens to kill Last Order, in order to pave the way to a “Third Season” of the Network that no longer needs her, Accelerator decides if someone has to die, it’s sure as shit not going to be Last Order. Once he starts using Reflection, the battle is basically over, and Accel goes a bit berserk in kicking her face in.

But he suddenly stops when he realizes Misaka Worst was sent here under the assumption he would kill her. He’s thus playing right into the hands of those he hates most, sitting back in comfort while he keeps killing and destroying. Rather than finish Worst off, Accelerator vows to protect her along with Last Order, not just to spite the bigwigs, but to prove to himself he’s capable of protecting something.