The club is putting the finishing touches on their photography, art, and magic exhibition (I love how the principal asks Kohaku to define “event”) as the day of the festival approaches, but the impending joy of sharing their gifts with classmates, friends and family is suddenly, jarringly preempted by a new and bizarre development: Hitomi is starting to experience “time gaps” as a result of the future Kohaku’s magic wearing off.

At first, Asagi thinks she was just mistaken in not noticing Hitomi in the room into which she’d just walked. But it only takes us one look from Kohaku to realize that something very wrong is occurring, and it can spiral out of control fast if not dealt with immediately. All of a sudden, all of the interpersonal problems that have occurred among the club so far pale in comparison to the very real threat of Hitomi permanently vanishing into oblivion.

Kohaku contacts a scholar and expert in time magic, as well as a fellow mage at a bookstore, to confirm her suspicions: whatever time magic she used sixty years in the future, it must be used again to return Hitomi to her proper place in the timeline, lest the universe excise her by force. For as much as she’s fit in and become comfortable, the fact is she is the kind of space-time abnormality the universe abhors.

There is no easy way to break this to Hitomi, and as a result of the suddenness and finality of the news (You gotta go, ASAP, The End) she’s just not sure how to process it, what to do or what to say. It’s sobering to know there doesn’t seem to be any time magic Kohaku of the present could perform on Hitomi to stabilize her presence in the past.

The next day’s weather reflects Kokahu and Hitomi’s moods, but the rain reminds Hitomi of the night Yuito offered her an umbrella, and she takes comfort in the belief it’s a memory she’ll always recall whenever it rains. Unfortunately, she also disappears right before Yuito’s eyes, and her umbrella depressingly falls to the ground.

When Yuito reports the incident to the others, Kohaku comes clean about the extent of the danger Hitomi’s in. She and Yuito find Hitomi where she vanished, sleeping in a bed of flowers in a disturbingly funereal scene that shakes Kohaku to the core. Back home, she sits vigil for her granddaughter, but her own grandmother tells her to get some rest herself. After all, Kohaku’s future self tacitly trusted her past self to pull off the time magic that will bring Hitomi back…but she won’t be able to do it if she’s exhausted. 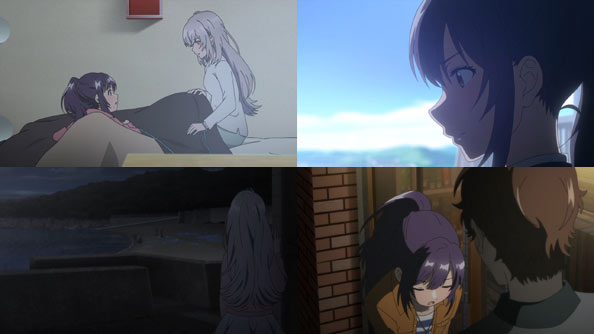 Hitomi wakes up the next morning literally tied to Kohaku with a string, and  ends up staying in for the day. Still, she gets up and leaves the house and ends up finding Kohaku on the beach with the others, gathering star sand for use in the spell that will return her to her time. A lot more sand than usual is washed up due to the typhoon that just blew by.

While no one is happy about the prospect of Hitomi having to go, and so soon (especially Asagi and Yuito), when Kohaku asks for help, they help, for Hitomi’s sake. They collect enough sand and she gets it to her acquaintance, who assures her they’ll have it ready to go by tomorrow.

Meanwhile, back at home, Hitomi finally finds a way to reach out to Yuito from across the town: a magical homing paper airplane, which taps on his window. He flashes his lights on and off, as does Hitomi. When her second airplane seems to go off course, she jumps into her shoes and chases after it.

Turns out it’s still en route to Yuito; he’s just not at home anymore: he’s racing towards her just as she’s racing towards him, and they meet in the middle, under the almost-new moon, and embrace. It took the urgency of impending oblivion for it to happen, but the two have finally come together and are on the same wavelength. It’s just too bad the time they’ll have after reaching this state looks to be all too painfully short… 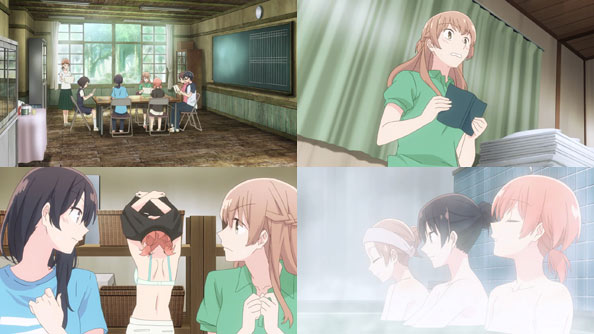 The StuCo summer rehearsal camp seems like a whole world of trouble for Touko and Yuu, not to mention Sayaka, and the three only grow more nervous and excited as the day turns to night and relatively normal StuCo operations switch to a bath and sleepover setting.

For her part, Yuu is committed to not letting herself get too flustered while in the bath with Touko (or at least not appearing as such), and Touko and Sayaka take her complete lack of hesitation in stripping down to be “going too fast.”

But once they’re in the bath together as a trio, they calm down, as all three know it’s just not the right environment to make a move, were a move to be made, due to the very presence of three of them. Were it just Touko and Yuu, or Sayaka and Yuu, or Sayaka and Touko, things might be different, but each serves as a firewall for the other, resulting in a less romantic and more collegial vibe, both before and during bedtime.

I particularly liked the three lying awake, wondering if the others were similarly awake, voicing to themselves the impossibility of anything happening that night. But while there’s perhaps a bit of frustration from being “blocked” by one another, most of what they feel is relief it’s the three of them. After all, they have a play to get down, such distractions are for another time…if they’re for any time at all!

With it thus established that no “first moves” will be made by any of the three, day two arrives with much less anticipation and suspense. But the day also marks the arrival of Tomoyuki Ichigaya to coach up the council. Not only is he in Hakozaki-sensei’s theater troupe, but he was a former student at their school, a member of the student council…and as such was close to Mio.

Kanno’s play is about a girl known as three different things based on who is remembering. Touko has spent so long trying to mold herself into a perfect replica of her sister Mio, she never stopped to wonder who Mio really was, beyond the physical manifestation of perfection she saw as a little girl.

She never considered that maybe what she knew of Mio was just one small piece of a much larger tapestry. Like the three people who know her character in the play, she’s working without the full picture she thought she had, which means she isn’t as perfect replica as she thought.

Indeed, according to Ichigaya, Touko has already surpassed Mio as a StuCo prez, and while he himself doesn’t have the full picture of Touko, we know that she’s been working a hell of a lot harder than he claims Mio worked. Mio seems to be someone who used the council as her own personal force of worker bees, using her charm to get them to do her bidding. And Ichigaya maintains that he and the others didn’t necessarily feel taken advantage of, since they genuinely liked Mio and it was fun being around her.

Still, this is a big blow to Touko, and she can’t hide how it affects her from either Yuu or Touko. Further, Touko can tell from just one little look from Yuu that she’ll be there for her, should she tell her what’s up. Touko wants to just melt into Yuu’s arms and bathe in her kindness, but is still worried about taking that kindness for granted too often, leading to it “drying up.”

Of course, as Yuu has said, that will never happen, but Touko holds back anyway. Instead, she sits back with Sayaka as the three kohais play with fireworks, content with their more old-fashioned sparklers. Sayaka goes first, asking about what she talked about with Ichigaya, and admitting she knows he was in Mio’s council.

Touko mentions the discrepancy between his memories of her sister and her own, and how she now feels lost now knowing she never had a “complete blueprint” to work from. Sayaka apologizes for not mentioning Ichigaya connection before, but Touko doesn’t blame her, doesn’t mind her knowing, and thanks her for worrying about her, which brings a bashful smile to Sayaka’s face. All the while, Yuu watches the two from afar, wondering what they’re talking about…and why Touko felt she couldn’t come to her.

Things seemed to slow down a bit this week, and while it may just be me noticing now, but some of the animation took a bit of a nosedive in quality, which was pretty distracting. Nevertheless, Touko’s Mio revelation is an crucial development going forward.