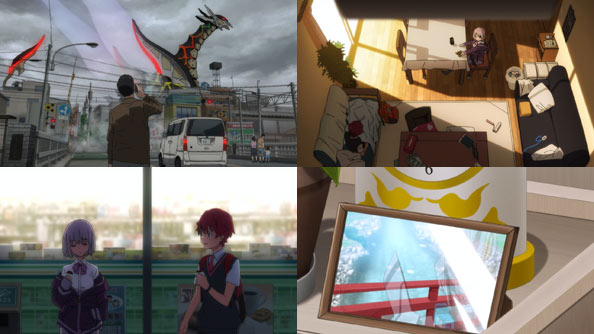 This week things start out different…and weird. Well, weird-er by SSSS standards. A new kaiju appears in the city, from the POV of a random passerby on the phone. We know there’s something fishy going on when Yuuta wakes up in Rikka’s apartment and Akane is there instead, even calling Rikka’s mother her’s.

There’s too much fog; too little activity; and in the glare of many a shiny object, Gridman can be seen for an instant, but goes unnoticed by a confused, amnesiac Yuuta, who at first takes it on face value that he and Akane is dating. 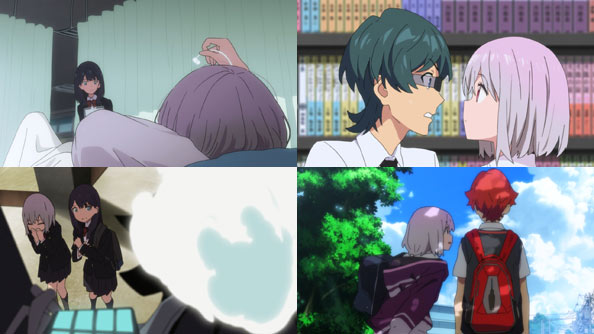 Meanwhile, at school, Rikka goes to the nurse’s office to find Akane already there. The two are friendly together, as friends are (and much like the end credits unfold), then Akane takes her to her house, as friends do. There are no parents, just Alexis, whose odd appearance Akane explains away as elaborate cosplay.

Then, in a repeat of an older scene, Akane strikes up a conversation with Shou in the bookstore about mecha and kaiju and the two hit it off, much to Shou’s delight. While walking home to or from school, we see Akane happily walking with Yuuta, her watch on his wrist. She leans in to hold his hand…and everything pauses.

These three scenarios involving Akane and the three members of the Gridman Alliance are all occurring in dreams. In “real life” (whatever that is) the three are unconscious on the couch in the junk store. The kaiju stands menacingly outside, striding about, but isn’t destroying anything.

As Anti learns when he tries to attacking it (being told by Neon Genesis that its keeping Gridman from appearing), it is a kaiju out of phase: unable to affect anything; unable to be affected. Akane is atop a construction crane with Alexis, watching the dreams…and hoping.

Not hoping to defeat Gridman, or kill someone she doesn’t like…but hoping these three can be re-made to be her friends, as they were originally programmed by her to be. 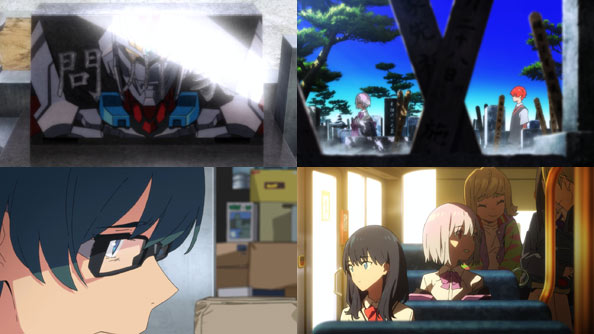 But the longer the three dwell in the dream, the more they feel like something’s not right. In a graveyard, in the glint of the gravestone of the family of one of the classmates Akane killed, Gridman appears again. In a flash, Yuuta’s memory has returned; at least the bit where he can be confident he’s currently in a dream.

After showering him with attention and rare swag, and about to be invited to Akane’s place to spend the night, Shou also snaps out of it; this is all just too good to be true; too ideal. On the bus, Rikka also quietly comes to the realization she’s not on a real bus and this isn’t her real life…and Akane just might not be a real friend. 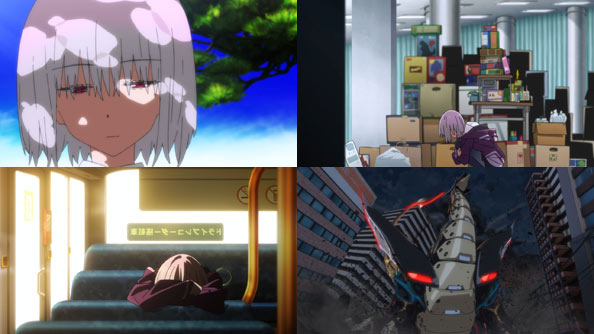 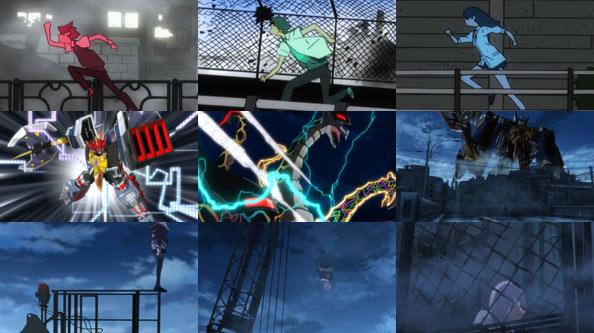 As the kaiju materializes and begins its march of destruction in the real world, the three friends run toward one another, and towards Gridman, in his time of need. Neon Genesis mobilizes on their own, de-scaling and combining into a kind of “substitute hero mecha” to bring down the kaiju.

What’s left is a cloud of dust, and Akane, in her created world, still profoundly, intolerably alone. She asks no one in particular what she should do before jumping from the tower and plummeting hundreds of feet. She lands on her feet, physically unharmed but clearly mentally spent. 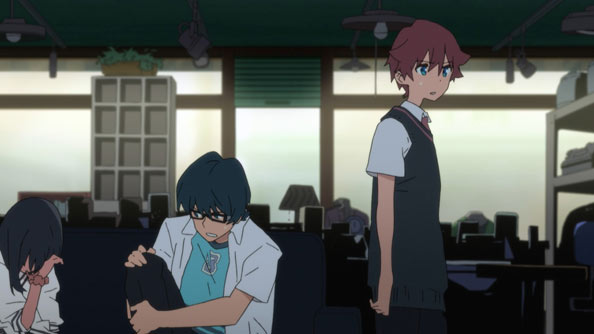 At first, Akane was a one-dimensional villain: create kaiju to defeat Gridman every week. But after who-knows how many iterations of that scenario, Akane seems tired, worn out, and above all, lonely and miserable. If it was Alexis who gave her the powers she possesses, perhaps she was excited about having them….at first.

But now those powers have created a cycle without end with no friends to comfort her. A dream from which she cannot wake. A prison from which there is no escape—not even suicide.

As Yuuta, Rikka, and Shou wake up in the shop, and thank Gridman for bringing them out of their dreams, Gridman informs them there’s still a fourth human who must wake from their dream. Then Rikka tells everyone there’s something she wants them all to hear. I for one can’t wait to hear what that is.

So ends the best Gridman episode to date; one that harkens to the weirdest headspaces and corners of Evangelion (the background sound of clanging we hear at one point is straight from Rei’s ‘hood); and even one that seems to take some steps in its own directions after drawing from Gridman lore for so long.

Even if this is more of that borrowed and reimagined mythos, you couldn’t ask for a more gorgeous, cerebral, unnerving, and ultimately  heartbreaking execution. I’ve never felt more for Akane’s plight than I do now, which is quite a feat considering the wrongs she’s committed. And I hope that Rikka, Yuuta and Shou can help her escape her prison and wake from her dream.