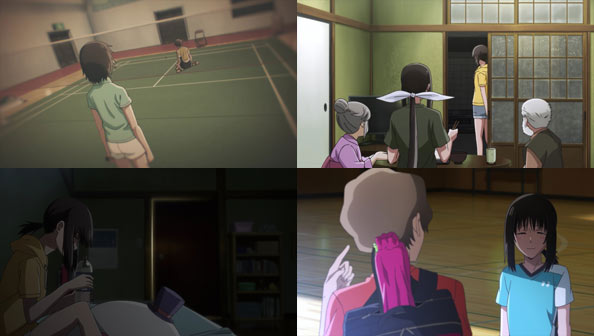 “Why do you play badminton?” That question is oft asked in Hanebado!. Characters ask other characters, and also ask themselves. “Because I love it” seems to be a pretty popular answer. I mean, why participate in a sport and work hard at it if you don’t feel a kind of affinity for it, or because it makes you feel good?

Ayano claims not to subscribe to such a glib answer. Everyone who says they play because they love it seems to get on her nerves. Perhaps it’s envy, or perhaps it’s obfuscation. Regardless, Ayano isn’t in this for the love of the game; she’s in it for revenge against the mother who abandoned her—even as that mother claims she left her so she would become stronger. 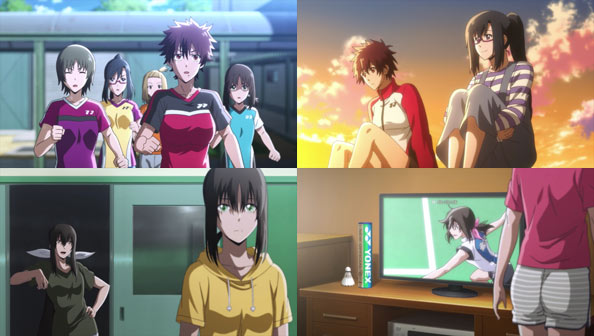 You can call Ayano’s decision to renounce her mother a kind of growth, but there’s just as much Nagisa growth on display this week. For one thing, she’s learned not to get bothered by Ayano’s haughty provocations. She’s also learned not to push herself too far.

As Ayano is trying her best not to let the sudden reappearance of her mother throw her off her game (she sees it as yet another hurdle to clear), Nagisa is trying to get to bed at a reasonable hour the night before the match; though she can’t sleep and instead studies film of Ayano, ending up with less than three hours of sleep. 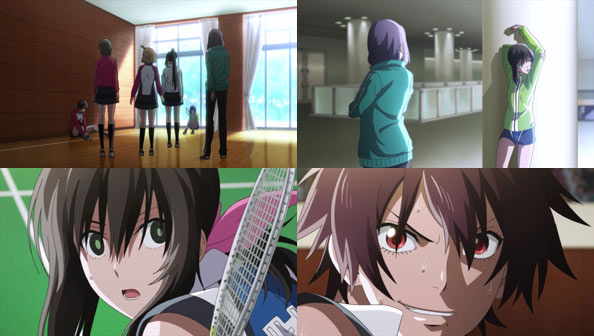 The day of the match, Ayano’s “teammates” encourage her, but she rejects that encouragement as a waste of time; her performance won’t be affected either way by their words. It’s the last display of cruel pomposity Elena is willing to bear. She takes Ayano aside and learns of Ayano’s plan to abandon her mom. And Elena blames herself for making Ayano join the club.

I can’t say I disagree with that placing of blame; while Ayano was hardly in a good place emotionally prior to being forced into joining club, the fact that she had come to hate badminton meant she had find a reason other than love of the game in order to prosper in it. With the best of intentions, Elena created a monster.

When play begins, Nagisa shows growth once more by playing a different game; not relying too much on her smash, and using more deception and less aggressive bull-headedness. She’s rewarded by winning the first two points of the first set. She also has the crowd behind her. 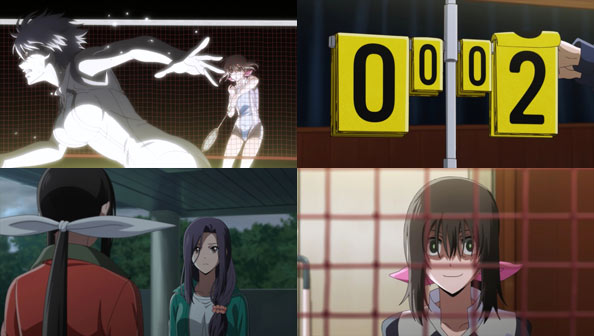 Elena spots Uchika walking out after her daughter’s two lost points, and as the rain starts to fall, expresses her desire to talk about Ayano with her. Meanwhile, Ayano, who didn’t see Uchika leave and probably doesn’t much care anymore, is hardly fazed by Nagisa’s surprisingly strong start.

In fact, she’s mildly amused, and then blurts out the strategy Nagisa is trying to employ. Nagisa was able to use the element of surprise to steal a couple of points, but she knew it wouldn’t be long before Ayano picked up on what was going on and adjusted her game.

While it only took Ayano two points for her to analyze Nagisa’s strategy, the show seems to want to present the possibility Nagisa could beat Ayano…but we’ll have to wait at least one of the final two episodes to know the final result. All we know is that Ayano will have a counterattack…and that we’re probably in for more flashbacks next week!