Chio loves gaming in her free time, which is usually nighttime due to school. As such, she loses track of time all too easily. But even when in the midst of her greatest online coup yet, her ears can still discern the slightest sound coming from RL, i.e. her mother coming in to make sure she’s not still up. With a series of quick and precise motions, she’s under her covers “asleep” and cute dog pics are on her desktop…though her lights are still on.

But while she’s “won” against her mom, there’s no fooling her body (which the camera seems particularly obsessed in this week, btw), which needs sleep. The only problem is, she’s too pumped up from victory to sleep. She misreads a clock and half-dresses for school, but it’s only 4:30.

At that late/early hour, she has two choices: try to sleep and risk oversleeping (and standing out in class) or foregoing sleep altogether and show up to class looking exhausted (and also standing out in class). She needs a third way, and determines that it’s sleeping at a shrine with a bag over her head and texting Manana to come wake her up. It pretty much works!…aside from her fatigue headache in the morning.

In the first half we spent a fair amount of time alone in Chio’s room, hearing her thoughts as she figures out how to repress her game otaku and not betray her goal to always come across as below average. When the second half starts in Manana’s room I thought we might spend the majority of the half there, but it’s only the opening moments.

What matters is what Manana watches on the tube before going to bed: a report about B.O. in girls. Manana had never given it much thought, but as she can’t smell herself properly, she has no way of knowing if she stinks or not, and so demands that Chio do so. Chio doesn’t smell anything out of the ordinary, but Manana then insists on smelling her…for science. 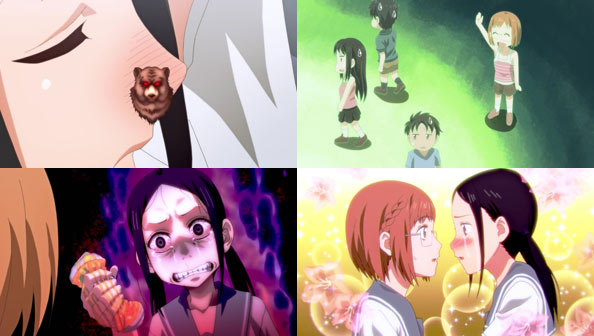 What Manana discovers in Chio’s right pit is a smell so offensive she thinks her nose was torn off by a bear. She spins this whole narrative about Chio settling for below average-ness due to her friend-repelling “Wild Game” odor—something Manana never noticed since they spent so much time together.

But Manana turns quickly from pity to resentment when she realizes Chio’s stink rubbed off on her and is the reason a guy she liked went with different, “plain-as-hell” girl. Manana brings in the ever-brutally honest Yuki (whom she tells to hurry…and she does!) as a third nose.

Yuki smels Chio’s other pit, which is fine; turns out her right pit had been licked that morning by her bad-toothed dog Chop. There was never a “Wild Game”, only Manana’s wild imagination run wild. Then Yuki’s honesty turns on Manana when she asks about the boy she liked—if she doesn’t smell, then what was the problem? Well, according to Death Scythe Hosokawa, it’s because he only likes pretty girls.