In exchange for the change to see and be purified by Shio, Taiyo follows through with Satou’s instructions, giving Asahi Shio’s sock and telling a tale about it being found at a station some distance away. A cordial exchange quickly devolves into nastiness when Asahi smells some kind of trickery afoot, and then triggers Taiyo into a rage by calling him a “dirty adult”; pretty much the worst insult you can throw his way. 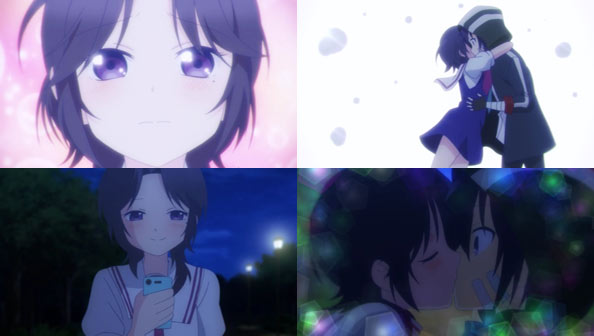 Still, Asahi regrets how things ended, and decides to take Taiyos advice and travel afar for more clues. The night before he leaves he meets Shouko in the park once more. Shouko thinks everything about Asahi is amazing, and while he’s not manly or her type at all, a part of her is jealous of Shio for having such a gallant prince willing to move forward no matter how much it may hurt or how scared he is. She bids him farewell with an exchange of contact info, and a kiss.

Satou is at the station to make sure Asahi is on his way, then returns home to 1208 to spend the whole day with Shio. It just happens to be the “anniversary” of the day she first kidnapped her. Satou celebrates by buying a bunch of fancy sweets which the two share together, and when Shio brings up the future, and securing said future together with the bonds of marriage, Satou is ready with two rings.

Both she and Shio are happy beyond words; giddy, even. And in a moment of particularly intense giddiness, Shio pounces on Satou as she’s exiting the front door…

…Where Shouko is waiting there with her cameraphone, and snaps a picture of Shio with Satou. It’s a devastating needle scratch but also a welcome glass of cold ice water on Satou’s frankly impossible (and ridiculously amoral) fantasy dream world. Her Happy Sugar Life is a sham; a mere house of cards that falls all too easily once a sliver of reality peeks in. 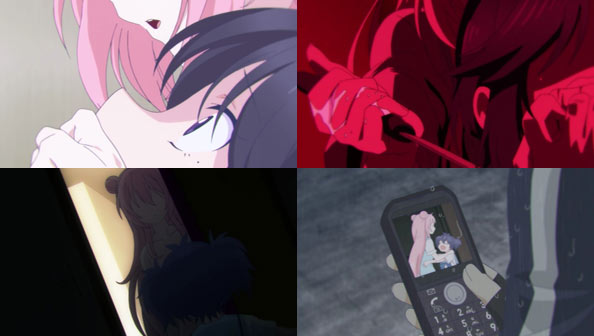 And yet, as evil as Satou’s actions are, Shouko comes with at least a veneer of non-judgment, acceptance, and love of and for Satou, no matter what she’s become, what she’s done. No matter how far she’s sunk into the muck, Shouko wants to pull her out and back into the light—the real light. But Shouko is doomed the moment Satou saw her on the balcony; before she even snapped that picture.

In a thoroughly unpleasant, sickeningly brutal scene, Satou grabs Shouko from behind as she’s leaving, sticks a knife in her throat, and suffocates her with her hand as she bleeds out. Another risk eliminated. She used soft power on Asahi, but had to go hard with Shouko, who kept persisting and interfering.

But Shouko’s death wasn’t in vain. The photo of Shio with Satou reaches Asahi. Will he be prudent enough to report Shio’s kidnapping to trained authorities and let them deal with Satou, or will he try to go after her alone? How will Satou deal with Shouko’s body, and will her murder spark a purge of more “risks”?

Most importantly, how will Shio respond to this once the initial shock wears off? Perhaps Shio herself could end up dealing the decisive blow to Satou’s delusional,  impossible world of sugar and happiness. The foundations of that world are as rotten as her aunt’s apartment; they’re sinking ever deeper into the earth made soft by spilled blood.