Now the picture of Matsuzaka Satou is that much more complete. Room 1208, the cage in which she now keeps Shio, was once the apartment where a loner artist resided. He didn’t want anything from Satou except for her to pose, and let her talk about whatever she wanted.

In the minimalist first half, it’s just Hanazawa Kana as Satou talking. The artist responds, but we only hear static, and never get a good look at him. It doesn’t really matter who he is, but what he wanted. He wanted Satou to remain incomplete and unsatisfied, so he could keep drawing her. 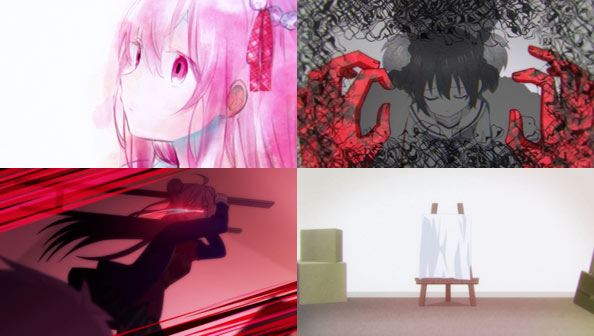 That changed when, one day, for reasons unexplained, Satou brought Shio to 1208. Before long, she started to feel something around her she felt for no one else; she became complete; satisfied. In other words, everything the artist didn’t want.

So he tried to get rid of Shio in the most reckless fumbling way: trying to choke her to death when Satou was out of the room. Of course, she enters, and the atelier becomes a violent murder scene.

Since Shio was a witness to it—albeit likely dazed/disoriented by the choking—it sure looks like the creepy figure she’s drawn in the closet is Satou herself. Shio carries the trauma every day, and it occasionally surfaces. That’s a problem!

Taiyo comes to a kind of revelation: he needs to give up on Shio and try to become a normal guy again. He’s content to keep the wanted poster in his pocket as he puts the pieces of his past life back together, not letting the trauma of the abuse he endured further mire him.

Unfortunately, his resolve to reform is brittle, and Satou finds him at the perfect time to shatter it, offering Shio’s still-warm sock to prove she’s serious about letting the “knight” meet the “angel” and let her “purify” him. All he has to do is get rid of the person trying to take Shio away from her.

I first thought Satou wanted Taiyo to get rid of the teacher, but I rethought that conclusion when Asahi gets a call from someone offering him a clue as to Shio’s whereabouts. I immediately thought that this was the first step in the plan Taiyo is carrying out for Satou.

Complicating matters is that Asahi is the one who finds Shouko at her lowest point, cursing herself for rejecting Satou when Satou needed her most and wanting to “disappear.” Asahi assures her she’s a kind and good person—the type of person prone to always laming themselves.

Asahi comforts Shouko and cheers her up, and they now seem to be friends, since she’s still by his side when he gets that phone call. If Asahi is Satou’s target via Taiyo, I doubt Shouko will escape uninvolved.