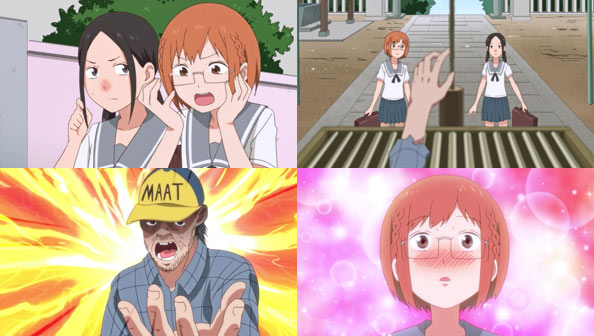 Chio was up all night gaming and not studying for the exams, so she resorts to praying at a shrine for divine assistance. Instead, they meet the creepy high school girl-obsessed “Master” whom their Kabbadi nemesis “trained” with in the park. While an unapologetic creeper, you have to respect the man’s commitment to his craft. He remembers his time as a high-rolling salaryman that women were only hired for their looks, not their academic bonafides.

Thus he and Manana try to give Chio a makeover, first with a blonde wig that ends up way too Showa Era, then a more classic old-fashioned wig that, while suiting her “plain face”, looks very odd when combined with her school uniform. Manana and Master’s running commentary is a constant source of laughs, as are Chio’s funny little background sounds.

Manana and Master perhaps praise Chio’s ‘do too much, for she starts to believe she’s “made it”, attractiveness-wise now, and decides to show them her sexy side by, ahem, pole dancing on the shrine grounds. Their reaction says it all. And the fact Chio picked up how to pole dance from a video game (and can pull it off due to her surprising athleticism) made it all the more wonderfully weird.

Speaking of weird, Chio appreciates things few other girls her age appreciate, like a pipe hanging over a waterway that’s made as hard to cross as possible…but for a valve that serves as a “safe zone.” Chio compares it to a strong, strict man who nevertheless has a kind side.

Speaking of such men, Chio and Manana encounter Andou numerous times during their walk to school, and it occurs to Manana that he seems to be trying extremely hard to impress Chio, and it’s working. She suspects (correctly) that he likes Chio and this is his way of courting her: using special moves to get papers in slots, smoking a cigar…you name it.

Then Manana imagines a future in which she’s still too poor to buy a small car, but Chio is living it up in her Porsche 718 Boxster with a very successful Andou by her side (and hilariously, sporting the same Showa hair/overdone makeup from the makeover segment)—with a haughty accent to boot.

Manana cannot allow such a future to occur, but Chio figures out for herself that Andou might like her (revealing to Manana that they have each other’s contact info). But Chio is immediately “proven wrong” when she and Manana spot Andou pressing another guy against a wall with his foot high up in the air.

Andou, wrongly assuming Chio was a hardcore fujoshi, decided to lift a special pickup move from a BL video…but Chio is still just occasionally glancing at the one mag she bought at the konbini. Instead, she assumes Andou is into guys and she and Manana give the men some privacy.

Later, Chio curses herself for ever believing anyone would fall for her, but Manana quietly insists she’s wrong. And she is! Who wouldn’t fall for Chio?!