This week begins with Marlo and Hitch, a pair of military police on patrol in the woods, just shooting the shit with a little mild flirting mixed in. They’re not evil or anything, just ordinary people…just two more bricks in the wall. They find Armin by a stream, and when they try to arrest him, they’re ambushed by Levi and Mikasa.

They don’t expect any valuable intel from these two grunts…they’re merely one step in a whole sequence of steps that might lead them to Eren and Tori’s whereabouts. Meanwhile, Hange rescues the Reeves scion, Flegel, and challenges him to do more than spend the rest of his days scampering around like a rat. 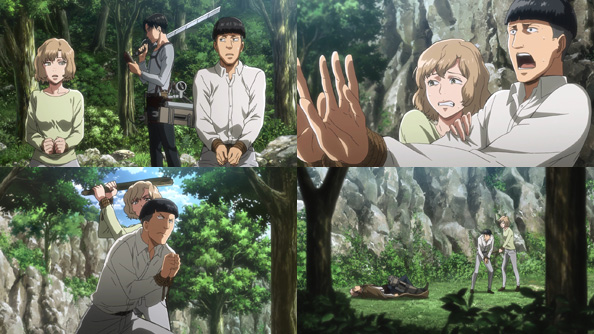 Levi first chooses Sasha to tie up and guard the prisoners, but Jean volunteers to do it, and takes Marlo and Hitch to a secluded spot where he threatens to kill them. He then stumbles—on purpose?—and gives the captives an opportunity to kill him.

When they don’t—both lost people in Schoess District, but Marlo seems sincere about wanting to side with the Scouts—it would seem they both passed Jean’s “test.” Two more soldiers for the revolution, perhaps.

Flegel is cornered by military police once again, but all by design. As gratitude for letting them find him, they agree to tell Flegel why his father was killed: he betrayed the police, who threatened him with death if he didn’t agree to kidnap the scouts.

It’s a very inflammatory monologue—perhaps too conveniently so, considering Flegel is not the only one listening. The supposedly “deserted” area where he let himself get cornered happened to be the perfect spot for Hange and her men to turn the tables.

Even better, dozens of the public overheard the police’s schemes, including two journalists. After seeing Flegel face up to his enemies even at the risk of his life, will they or other citizens feel motivated to question the “truth” the military police dispenses? We shall see; that’s certainly what the Scouts want and need: public support to sway back in their favor.

After ambushing a checkpoint, Levi tries to beat intel out of its commander, but when he finally pretty much breaks him, the guy has little of value to say because he wasn’t trusted with the location of Eren and Tori. Kenny—whose last name is Ackerman, we learn—is too cautious for that.

Finally, in the royal capital, a beaten, tortured, starved, one-legged Erwin Smith still manages to maintain both his sanity and dignity, casually asking one of his tormentors about his family. Erwin is brought before the king for sentencing.

Erwin is to be the first of the Scouts to be officially tried, found guilty, and executed, and the Military Police won’t stop until they’re all gone…all to maintain the kingdom’s secrets.