AICO ends by having its cake and eating it too, with only Isazu suffering long-term ill effects from the events of the finale. In the last couple episodes he’d devolved into a raving, maniacal villain, but at least it was presumably out of his Papa-Grizzly desire to protect his cub, Yuzuha. However it’s clear he’s willing to use Yuzuha to manipulate the matter to his whims and gets drunk off the power, ignoring her pleas for her to stop. 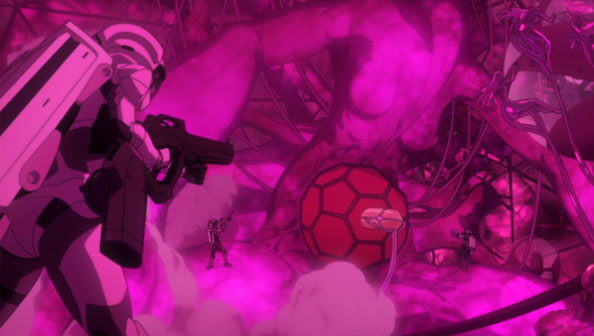 Isazu presents a persistent threat to Kanzaki’s attempt to perform extremely sensitive “brain transfer surgery”, the science of which neither the show nor I will bother getting into; suffice it to say Yura is one of the greatest medical and scientific minds in human history, which is frankly…a bit much.

But with the other Divers arriving at Primary Point, and Kurose successfully infiltrating the hospital and disconnecting Yuzuha from her duplicate bodies (ending the threat Isazu presented), Kanzaki/Yura has just enough time to pull it off. When the procedure is complete, The “Real” Tachibana Aiko emerges from the surgical capsule safe and sound, if a little out of it. 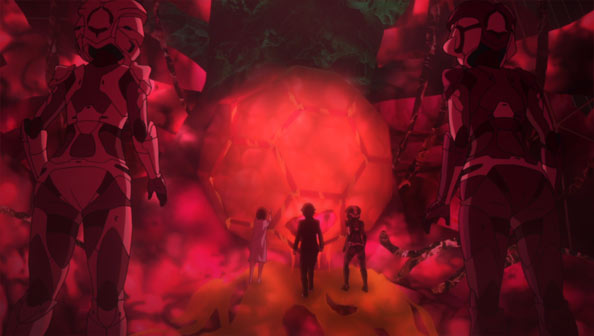 However, Yura’s intention wasn’t just to revive Aiko, but save the other Aiko who had spent the last eleven episodes proving that she was just as real. He didn’t want either Aiko to die. Yet once the “fake” Aico has confirmed Aiko is alright, she seems ready to do just that, as her head retreats into the mass of Matter, which starts to turn green, as if decomposing. 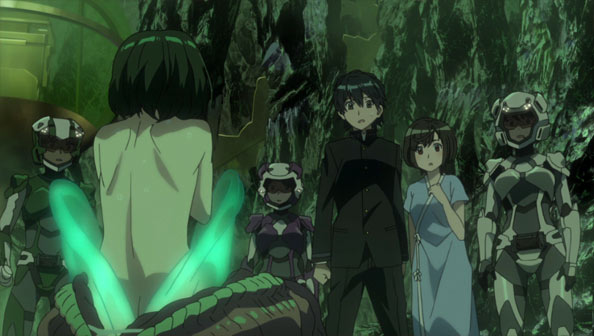 But just when everyone is lamenting the loss of a person they’d become quite fond of, the dying matter spits out a strange fetus-like thing, which then spits out a fully alive (and naked) Aiko. Turns out Gummi, whom her father gave her, was meant to serve a far more important role than just that of a pet and companion.  Gummi also contained the sum total of data for Aico’s body, such that once the brain transfer was complete, Gummi was able to surround and regenerate her body. 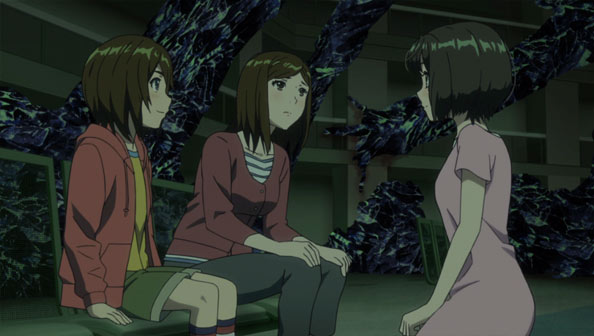 Aiko invites Aico to join her family (her mom and brother are released and soon up and about), but while she’s grateful for her conterpart’s kindness, she respectfully declines.

Aiko at least insists she meet at least once with her Mom and Ryouta before going off and doing her own thing, and the resulting reunion is every bit as powerful and earned-feeling as when she first arrived at their cocoon, particularly when she starts to tear up immediately after turning her back on them.

From there, everyone returns to their lives, and the Area, now free of malignant Matter, begins to rebuild. As for Aico, she starts on her own path at a new school as a transfer student, but her name probably isn’t Aico.

As for what it is, we never find out, and I enjoyed the ending that cut off her introduction. All that matters is she is a different person. She’s the girl in loafers walking into a classroom in the ED. Most importantly, she’s the one we’ve been watching and following all this time. I wish her well.