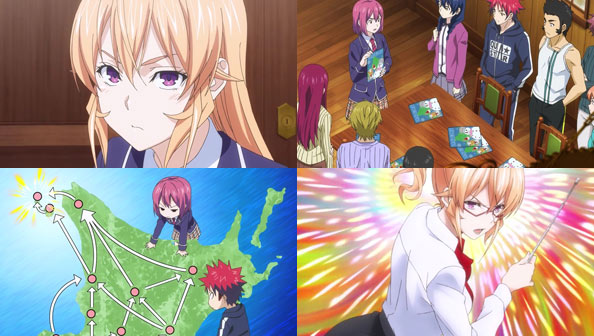 Erina has decided she’s going to do what she wants…which just so happens to be the right thing and benefits the Totsuki rebels AND means she’s bound to spend more time with Souma.

The structure of the advancement exams are laid out by Hisako and it feels more like a military campaign against Hokkaido, and for that, Polar Star needs a drill sargeant to train them up. Erina lands on a sexy teacher look instead, and nobody complains.

During the week in which Erina whips Polar Star into shape, Nikumi and the Aldini Bros. listen in, and Erina ends up pulling them into the Hokkaido seminar as well. They have nothing to lose; they’re rebels too.

On two separate occasions, Erina makes sure to remove her glasses before talking to Souma. She puts her faith in his ability to come up with a solution to whatever they throw at them, and later she tells him whatever she might have said in the past about wanting him to fail, she doesn’t feel that way anymore.

Naturally she frames it in terms of not wanting anyone to be expelled…but Souma is part of that “anyone”, and he appreciates it.

The class is bussed to the first of many examination venue (Totsuki’s resources really are formidable), and the rebels are all grouped together among the 5-person teams—all but Erina, who is intentionally placed in a group of faceless classmates who have abandoned their own cooking for Central’s orthodoxy. Azami can’t be losing his God Tongue, after all.

Not only are the rebels isolated, but the salmon they’re given is subpar. Fortunately, they’re given from roughly noon till sundown to come up with a dish, and the group, made up of Souma, Megumi, Alice, Ryo, and Yuuki, have more than enough skills and resourcefulness between them to come up with something. Erina allows a wry grin of understanding. She’s taught them all up, now it’s time to see if they can fly. 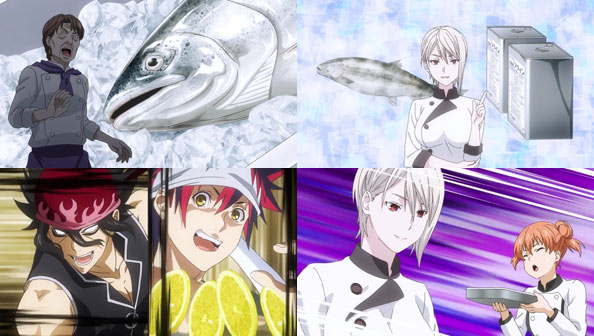 Her faith in them is matched only by her clear disgust for the other kids’ blindl following of the step-by-step instructions to creating Central mandated salmon dishes. Only the steps matter, and the only answer to “Why” is “because Azami wishes it.” That’s not cooking. That’s cynical mass production of one and only one way of cooking.

After facing off against Alice and Ryo in the past, it’s great to see them on the same side as Souma, working to their strengths with the precision and speed they’ve come to expect of one another. Of course, it’s not 100% smooth, as Alice constantly takes exception to Souma asserting himself as the leader…as well she should! 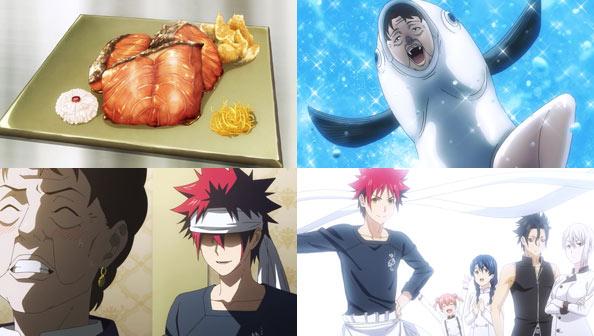 While they arrived in the kitchen with their salmon less than a half hour before time expires, it’s such a quality fish (brine-frozen at its peak of freshness), a half-hour is all they need to put their instructor on her back, leaving her no choice but to pass them.

I’m appreciative that at least at this first stage of the exams, despite all of the roadblocks Central puts in their way, when it comes time to judge their cooking the clearly-biased instructor cannot deny what her taste buds are telling her—that the rebels made the best dish in the room.

Indeed, Azami and Central are actually helping the rebels to become better chefs by piling so many challenges ahead of them. If they can overcome them and advance to the second year, it won’t just be a repudiation of Central orthodoxy, but a back-door defense of it as a tool with which to forge great chefs from the crucible of adversity. 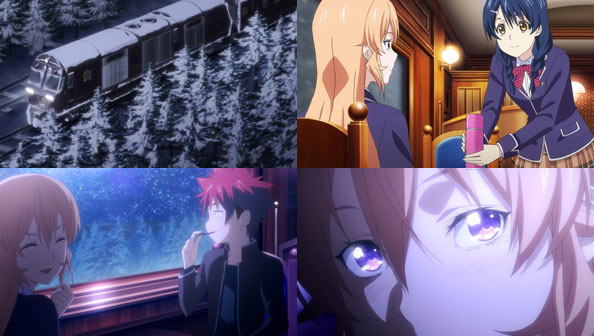 With the first hurdle cleared, the rebels join the rest of the advancees aboard Totsuki’s grand luxury sleeper train, the Tsukikage, which brought back memories of Rail Wars! and explains the OP’s train imagery. While Hisako continues drilling some Polar Stars, others take the opportunity to avail themselves of the sumptuous train’s many features.

Erina, meanwhile, holes up in her personal compartment, but is visited many times by Fat Aldini, Ryouko, Megumi, and finally Souma. She doesn’t realize they’re coming to express their appreciation for all she’s done. Of course, she was never after gratitude, nor did she expect it; Erina is doing what she wants…and loving it.

Souma joins her just as the train leaves the forest, revealing a sky packed with twinkling stars that remind Souma of salmon roe, and he even gets her to drop her guard and laugh at him (rather than scoff or harrumph). Then Erina takes note in her head that Souma’s face, the mere mental image of which used to annoy her to no end, is something she’s come not to mind so much. Baaaaaaaaw. Erina’s the best.