From the director and series compositor of Working!! (and Momokuri) comes another workplace romantic comedy involving two otaku who knew each other in both elementary and middle school suddenly realizing they work at the same drab office. Momose Narumi is a fujoshi, while Nifuji Hirotaka is a game otaku.

They fall back into their old dynamic almost immediately, as reflections of each other that don’t have to put on airs. Narumi also seems able to hold her liquor, while Hirotaka smokes like a goddamn chimney. They may not be kids anymore, but they remain steadfast otaku, and seem to draw strength and validation from one another’s continued sustained to their mutual odd obsessions, even if, at least initially, Narumi has no intention of dating her childhood friend.

Narumi is a particularly lucky otaku salarywoman, because her office senpai Koyanagi just happens to be “in the fold”, having cosplayed as a man at many an event. Koyanagi also happens to be a great fan of Narumi’s fujoshi work. Narumi took a risk by being open about who she is and what her interests ares, and it paid off Koyanagi is even cooler than she initially imagined.

As for Hirotaka, he’s slightly better at his job than Narumi, but that may well be a factor of him being with the company longer. Narumi left her old company due in part to having dated and broken up with her old boyfriend who worked there once he found out she was an otaku. Hirotaka has no such qualms, as he is himself an unapologetic otaku, and is all too happy to wait for Narumi to finish her work so they can go out for drinks. 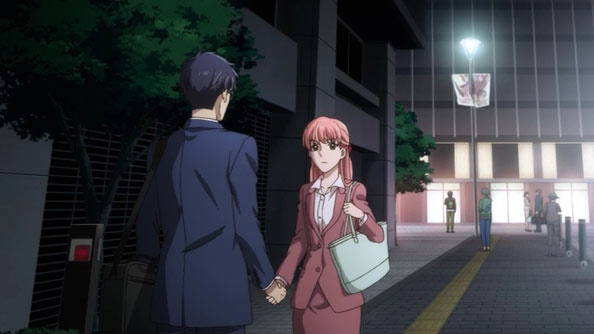 It’s also Hirotaka who proposes Harumi should just date him. She herself voiced frustration over always “making the wrong choice” when it comes to love, so she’s willing to defer to Hirotaka in this case. He offers her a blindingly logical argument for why she should choose him: he will accept her for who she is, and she can do the same. He can also accompany her to events like Summer Comiket. It’s a match made in otaku heaven, really.

WotaKoi is a brisk and breezy little show that doesn’t waste a lot of time getting its main couple together. Their exchanges are easy, casual, and comfortable, and their pairing up feels both inspired, inevitable, and thoroughly reasonable. They sport a great effortless chemistry, and I’m eager to see how their new “alliance” works out.