Nitta Yoshifumi is your typical low-to-mid-level yakuza, doing pretty well for himself without getting his hands bloody, preferring the art hustle to less civilized ventures. He has a fine condo with fine furniture, fine objets d’art, and fine wine.

Then quite suddenly (as these things tend to happen), a strange metal egg with a face falls from above. Nitta decides to pretend its not there and go to bed. But of course, it’s still there in the morning, and he presses the red button as the face instructs to reveal Hina, a blue-haired brat with telekinetic powers.

Nitta…goes with it. I mean, Hina doesn’t give him much choice, wordlessly threatening to destroy all the fine things he owns unless he acquiesces to her demands, which range from “clothes” of any kind to cover her up, to over eight thousand dollars worth of merch at the mall.

Hina isn’t the expressive sort, but lots of TV-watching gives her a vocabulary Nitta can immediately identify when she uses it. He finds himself feeling like a caregiver all of a sudden, rather than somebody only in this life for himself and his organization.

When Hina decides she’s going to school, Nitta gets her to promise not to use her powers, lest chaos ensue. As Hina makes a fine first impression by forgetting her assumed last name, then sleeps through every class, Nitta wrings his hands at a meeting with his fellow yakuza, worried about how she’s doing—and they misinterpret his intensity for being gung-ho about taking on a rival group.

Well, chaos ensues anyway, because she neglects to tell him that if she doesn’t use her powers for too long, the power builds up and explodes, trashing his whole place. I loved the suddenness with which this escalated.

Since she has to use her powers anyway, Nitta tries to find a practical use for them, and finds one in a forest-clearing job for a shady developer. Uprooting mature trees, cleanly stripping their branches, foliage, and bark, and filling the holes in the ground is child’s play to Hina, who privately wonders why this Nitta guy is being so nice and not ordering her to kill people.

Nitta makes a killing on the tree job, but gets no congratulations from the Chief, because in his absence the Boss got shot, requiring their group to respond in kind. Nitta doesn’t even think of taking Hina with him, but resolves to take care of it himself, despite lacking any credible bona fides in the violence department. 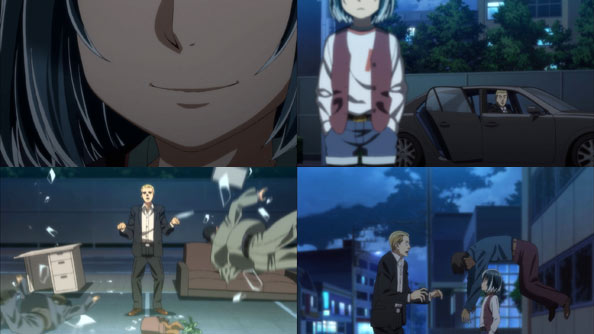 Hina tags along (and scares the shit out of Nitta in the car) of her own volition, asking him why he won’t give her orders to kill the men in the building. Nitta’s all-too-decent response is a revelation to Hina: “Why should you have to do that? This has nothing to do with you!” Touched that he cares for her, she smirks and decides to take care of business without orders.

Hina is as efficient at clearing out the rival groups’ hideout and serving up their boss as she was clearing the forest, and we listen along with Nitta to the screams and grunts of the building’s occupants as she goes floor-to-floor, tossing every peron and piece of furniture out into the street (though notably never hitting Nitta with anything).

Everybody wins: Nitta is promoted for his excellent work (he neglects to mention his “brat” did it all; not that he wants it known she has powers), and Hina gets to exercise her telekinetic valves. Nitta generously rewards her (another concept unfamiliar to Hina from her previous life) with the finest kind of her so-far favorite food (red caviar), and the two settle into a mutually beneficial situation.

Post-credits, Nitta accidentally locks himself in the metal egg Hina arrived in, and Hina exacts a bit of revenge by leaving him in there all night, only releasing him in the morning after he’d wet himself (the moment of his release is played exactly like Ahnold’s arrival in Terminator, only with a cloud of piss.)

Hinamatsuri is a ton of fun. It’s also an absolute hoot. I was snickering or laughing for virtually the entire run time, as Nitta’s reactions to Hina’s deadpan remarks were constantly entertaining, as was the physical comedy of the telekinetic hi-jinx. There were too many hilarious lines to list.

The show has a marvelous sense of comedic timing in both dialogue and editing, but the comedy never overshadows what is, at its heart, a warm and sincere story of a man who suddenly has someone to care about, and a former human weapon who suddenly has the freedom to be a normal girl, even if she occasionally has to literally blow off some steam. I’m on board!