It’s the year’s end, and the members of the expedition get to communicate with family and/or friends via a satellite feed. This is how Mari’s mom and sister get to laugh at her ski goggle tan, but it’s also how three high school track club members reopen a wound for Hinata; a wound she decided to forget about and move on from in…the furthest place in the universe. 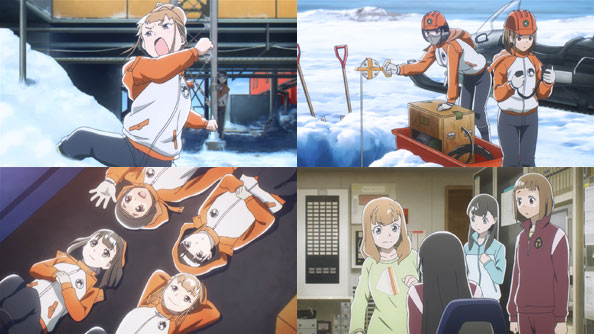 But just the sight of those three girls boils Hinata’s blood to the extent she must run outside and wreck some shit while yelling for them to “piss off!” Shirase witnesses this display, and it only reinforces the concern she felt the minute Hinata covered up the camera lens.

Hinata—and, unwittingly, Mari—conspire to keep Shirase from ever being able to broach the topic with Hinata, almost intuitively senses what Shirase wants to talk about, and wants nothing to do with it. Shirase gets so worked up about what Hinata might be hiding, she crosses a line and opens Hinata’s email.

I was as curious as Shirase to learn why Hinata was acting this way, and truly wanted both her, Mari and Yuzu to find some way to make things better for Hinata. I may have even done what Shirase did…but it doesn’t make it right.

Hinata comes to realize she’s partly to blame for Shirase’s breach of privacy by being so inaccessible. So she tells Shirase and the others her sob story of being too good at running, showing up the upperclassmen, and getting ostracized. Not only does she leave the club, but she quits school due to the fallout.

Now the girls know why she was so put off by seeing her friends on camera: she doesn’t see them as friends. Later, when the girls get to do some expeditionary work in an alien landscape that looks kind of like chocolate cake with white frosting, Hinata reiterates that she doesn’t care about the noise from the past, and came to Antarcitca precisely to get away…not just from petty high school drama, but everything. 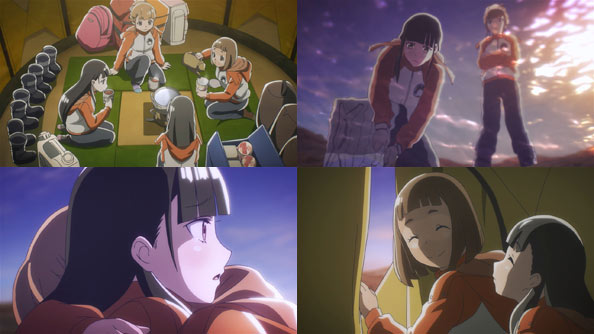 Shirase ponders all that Hinata said, and puts herself in Hinata’s shoes. Taking Hinata aside to get some of that pure, crisp Antarctica water (my mouth hadn’t watered over water since Last Exile; good job, show!), Shirase tells her that she wouldn’t be okay with it, or be able to smile with it hanging over her.

Hinata makes the good point that she’s not her; different people get to deal with things in different ways. But she also admits she may still simply be too scared to face those track girls, whether it’s to forgive them, to tell them to eat shit…or both. She thanks Shirase for having her back, but tells her she doesn’t need all the words Shirase wants to say…the warmth of her hands is enough.

When those three girls show back up in the satellite feed, Shirase shows she isn’t done. With Hinata’s emotional well-being at stake, Shirase completely shaks off her usual camera shyness, interrupts the planned schedule of the broadcast, and confronts the track girls directly, telling them to leave Hinata the hell alone.

Shirase goes OFF with an epic tirade that only further expanded my love for both Shirase and Hanazawa Kana. Hinata is doing fine without your lame asses, she basically says. She is taking steps forward, with her real friends:

“Unlike Hinata, I’m a real jerk, so I’ll say it straight: You can’t live your lives in this halfway state forever! You hurt someone and made them suffer! Now you get to live with that! That’s what you get for hurting someone…for hurting my friend! You think you can come crawling back now? PISS OFF!”

Masterful shit right there…that not only brings Hinata, but the other girls and Shirase herself to tears, while Toudou Gin has a glint of pride in her eye, surely seeing the passion of her dearly departed friend burn in her daughter. When they ring in the new year, it may be with a block of wood and an steel drum, but it’s no less triumphant. Time to turn the f’in page. A new year and new experiences await.