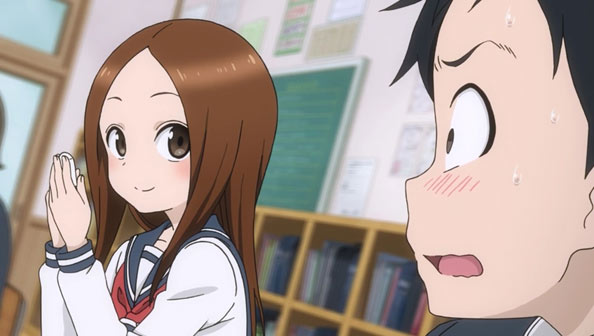 It’s said that boys tease girls that they like. It’s also said they do this because, in their adolescence, they don’t yet know how else to express their like properly.

Well, in Karakai Jouzu no Takagi-san, the titular girl Takagi teases the Nishikata, the boy who likes her, and the time and effort she puts into getting him to laugh, shout, and/or otherwise disrupt class and get in trouble, suggests the affection is mutual. 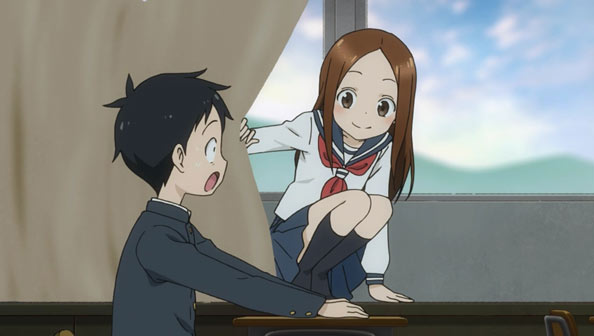 Of course, this is middle school, so Nishikata treats Takagi’s incessant teasing as something that must be responded to in kind. He focuses on the fact this girl is beating him at the teasing game he wants to win, instead of the fact that, hey, this pretty girl is interested in me.

This teasing takes three forms in the first episode: an eraser (upon which one writes the name of their crush), during early day duty (where Takagi lies in wait behind a curtain) and with funny faces (which Takagi immediately turns back on Nishikata).

In every case, Takagi always wins and is always at least one step ahead, and Nishikata always fumes internally, his pride constantly being shattered. 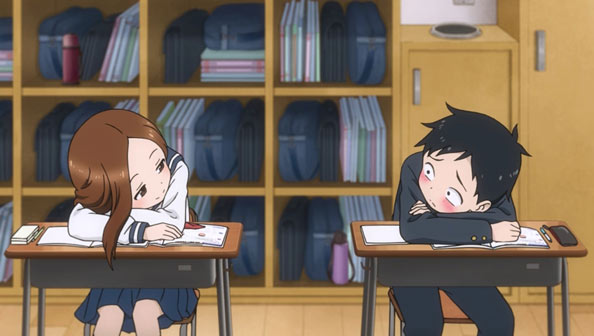 To which I say WHO CARES? If this lady wants to tease you, let her! Don’t get so worked up about being beaten. (I know, I know, he can’t hear me. Even if he could, he wouldn’t listen.)

In any case, I never tired of watching Takagi get one over on Nishikata, and I don’t think I ever will, which is why I think I can keep this on my Winter list. Takahashi Rie and Kaji Yuki’s voices are a delight to listen to. The show is oozing with warmth and charm.