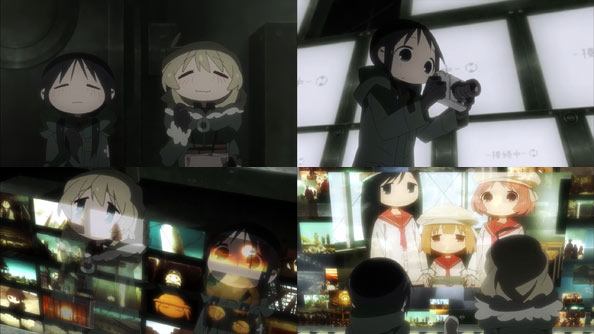 Aboard the derelict sub, the girls find a clean boat, chocolate…and a kind of patchwork history of everybody and everything that came before them, thanks to the camera auto-syncing with the monitors on the bridge. In addition to all the pictures they took, and those Hanakawa took before them, the camera is a veritable cornucopia of visual (and audiovisual) information.

The content ranges from simple images of life and death, to the reports of a school robotic research club, to news reports of a worsening geopolitical situation that leads to large-scale war and genocide. On the whole, though, Chito and Yuuri feel less lonely, now that they were able to watch how others lived.

Suddenly processing more information than they ever had before proves exhausting for the girls, who fall asleep under the consoles and dream of their escape from their town.

When Chito wakes, she’s too late to do anything about Yuuri getting swallowed up by a giant version of Cut. Chito suspects Cut might’ve been some kind of lure used by the bigger ones, but Cut’s body language suggests that’s not the case.

Chito runs through the submarine, desperate to find her one and only companion, and eventually emerges from the conning tower to find the Big Cut isn’t interested in eating living humans, and spits Yuuri out. It then transforms to reveal it’s a kind of semi-sentient mushroom.

The mushroom has a mix of good and bad news…though I guess it’s mostly bad for humanity. They are systematically ridding the earth of toxins leftover from the human population after it destroyed itself with war. Yuuri and Chito are the last two humans left, by the mushrooms’ reckoning.

All machinery will shut down around them, and after they’ve passed away, the world will enter a period of rest and inactivity, as the mushrooms hibernate. With that all said, mushrooms emerge from the nuclear missile tubes of the sub and they all ascend into the sky, likely to start “cleaning” the higher levels.

There’s not much for Chito and Yuuri to do but continue on their tour, with the goal of reaching the highest level. Even with their companion/pet Cut gone off with its brethren, Chito and Yuuri aren’t lonely, nor do they care if the world ends, because they have one another.

As with so much relating to this show, it’s simultaneously a deeply bittersweet ending, conveying the lesson to not be troubled by things life you can’t control (like the ending of the world) and take comfort in those you can—like who you choose to spend your days with.