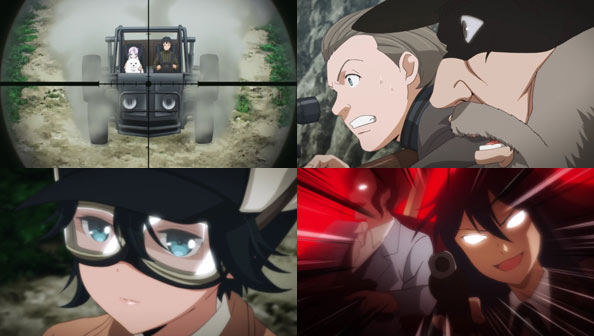 This week we get five stories in one, as Kino jumps from country to country and character to character in a what ends up a bit of a “beautiful world grab bag.” The first story is told from the perspective of two bandits, a student and an elder. The student wrongly assumes both Shizu’s party and Kino are appropriate “prey”, but the elder knows better from a look.

Cute and alone Kino may be, but if she’s alone, it’s because she’s capable of traveling alone, which means she can handle herself. Ditto Ti, holding her hand grenade, and Shizu, who may only be a swordsman but isn’t the type to be defeated by bullets alone. The elder learned a lot after wrongly believing Kino’s master and her apprentice were prey, but turned out to be “devils”. 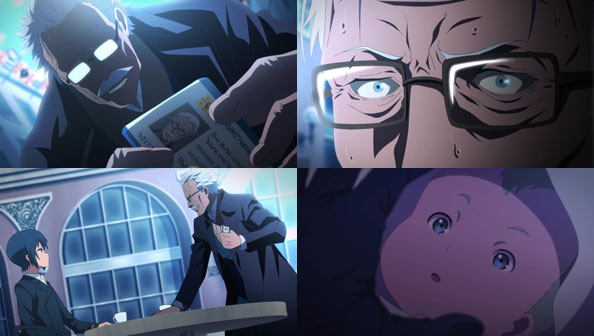 A neat little outside look at Kino and Shizu. Next up: a country where people accrue “virtue points” to determine status based on good deeds. Points are deducted for crimes, but it’s a system in which it’s possible to accure enough points over a lifetime to exceed those that would be deducted for killing someone.

That’s the dilemma an old man Kino meets is facing, and indeed, he originally approached her with the intent to kill, which is why Kino never took her hand off her gun. The man laments his inabilty to kill anyone as a failure in life, for he’ll die wasting all the accrued points.

That was a bit silly and weird, but at least had a nice Kino moment of a seemingly nice guy turning out to be much darker. The third segment involves Kino’s visit to a “country of cooking” where a council of chefs begs her to cook a dish for them.

Hermes worries for the country, because apparently Kino’s cooking sucks (har har). However, the country buys into her super-spicy chicken, though another traveler comes along and makes a milder version that’s equally popular.

The fourth segment is the shortest, as Shizu, Tifana and Riku arrive in a city with giant statues people attach wishes to so they’ll come true. Ti decides to wish for “everyone’s wishes to come true”, which earns her many thanks and approving words from the folks around her. Of course, Ti only made that wish because she believes it’s all bullshit anyway. 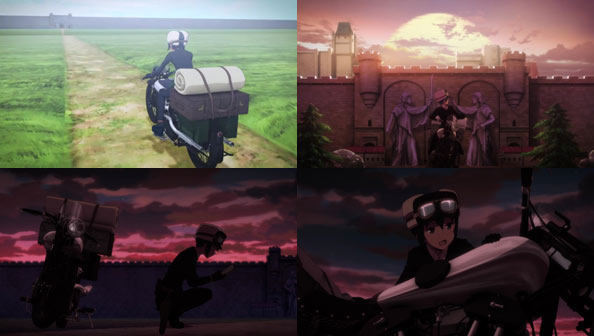 Finally, Kino enters a country her master once mentioned as a place of “beautiful memories”, moreso than any other country. And yet, Kino was never able to get any actual info about the country out of her master. When Kino enters and seemingly immediately exits through the other gate, she learns why.

Upon entering the country, visitors must agree to have all of their memories of their stay wiped if they wish to stay. Kino agreed, which is why she remembers nothing. Hermes, whose memories weren’t wiped, nevertheless won’t tell Kino because he promised the country he wouldn’t and isn’t one to go back on his word.

All he can say is that she enjoyed herself, perhaps more than any other country they’ve visited. The details of that enjoyment, however, remain classified, though she was allowed to leave with a crude drawing of her posing with people she must’ve met there.

The end credits came a message from Kino’s original creator, Sigsawa Keiichi; an “anime afterword” consisting of words of encouragement for anyone seeking to make their dreams come true, as they apparently did for him. Well…good for him, and thanks for writing Kino so we could have this anime! It just seemed strange to get such a message when there’s still a quarter of a season left to watch…

After the dispersal of Cartaphilus, life returns mostly to normal for Chise, who enters a nice, steady routine along with her new familiar Ruth. The part that isn’t normal is Elias: he’s confined himself to his room and Chise doesn’t dare enter. Eventually, Silky tires of her standing by Elias’ door and throws her and Ruth out of the front one with spending money. 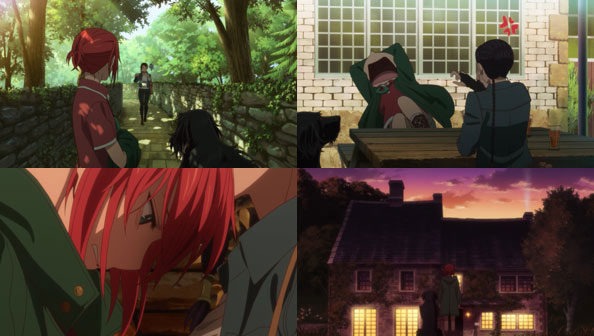 It’s not long before Chise runs into Angelica, and the two do some sightseeing and shopping around town. Angelica first tells her she needs to learn to rely on people more, but later wonders out loud if she’s being too dependent and fixed on Elias. While Angelica apologizes for saying too much, Chise latches on to her latter point, and turns it into a larger criticism on her own perceived “selfishness” for not wanting to be abandoned.

Obviously, Chise’s being too hard on herself. Considering how much she’s already lost in her sixteen years (and how few years she may have), I’d say she deserves a measure of selfishness. Besides, even as an apprentice she’s touched a number of lives in meaningful ways. She’s a good person becoming a good mage.

As if she heard my words about her, Chise decides to do what she wants, which is storm in Elias’ room and ask him what exactly is going on. The Elias who she meets is even farther from human than usual, and he warns her (with a steady voice that belies his fearsome appearance) he’s having trouble controlling his body. I couldn’t help but think of Howl (of the Moving Castle) when he’s extended himself too far and become beast-like.

Chise was startled initially, but doesn’t remain afraid for long (thinking it’s because she’s cursed). In fact, she spends the night with Elias, during which she dreams of him on top of her turning into her mother, who tells her she should never have given birth to her. How creepy and messed up is that? She wakes up to find Elias gone and a note saying he’ll be back that night. 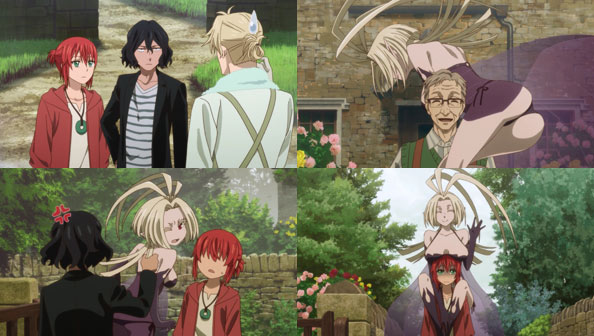 That’s not sufficient for Chise, who didn’t get all the answers she wanted, and initiates a search for Elias with Ruth. Along the way, they encounter an old man apparently in thrall to a leannan sidhe, a kind of vampire that gives their host talent in exchange for their blood – but she is invisible to him. 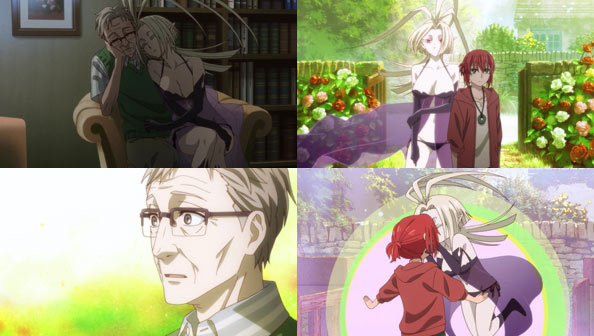 The thing is…while Joel Garland is a big reader and occasional writer, he doesn’t have the talent or fame one would expect the Sidhe to give him. Nor does she even take his blood, because he lacks the ambition that is usually the opening her kind uses to gain a host.

Instead, she fell for him, years ago, when they met eyes. They meet eyes again, and the Sidhe believes it’s because Chise, a sleigh beggy, is there. She gives Chise a couple of kisses as thanks and asks her to come see Joel again some time, but insists, almost tsundere-like, that she doesn’t actually love the guy, since she can’t give him talent or take his blood. 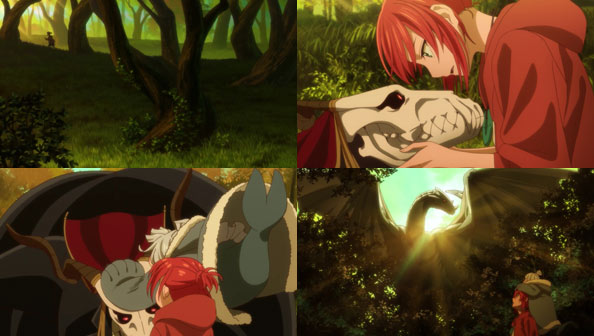 Chise doesn’t think she can talk of love when all she can think about is herself…but is she really doing that? Does she only worry about Elias because he saved her; because gives her a reason to live; because she benefits?

Ruth finds Elias resting in a pool and Chise races to him, demanding more answers even though she expects only a few mixed with half-truths and deflections. Elias always assumed a minimum of information was needed since she understands and accepts him so quickly.

What he didn’t realize was that Chise cares about him to the extent a note and a little bit of explanation isn’t always going to cut it; she’s going to want more sometimes. Elias, taken aback by her “new faces”, now understands, but still needs more time to recover and gather his thoughts.

Just then, Echo’s familiar appears on behalf of Lindel, to invite Elias and Chise to the Land of the Dragons where he has “business” with her, revealing the setting for Chise’s next adventure.

The “Desperate Fight in the Macro Zone” concludes in epic, massively satisfying, and surprisingly moving fashion, proving that splitting it into two parts was a smart move. Hellsalem’s Lot gathers on rooftops to watch the pandemonium unfold, confident the world’s largest individual, Gigagigafutmassif will put the Rielmonster in its place.

Of course, using force against Riel only makes him bigger and stronger, leading Giga to beat a hasty retreat and leaving the crowd without a champion to save them from certain ruin. Chain and the Werewolf Bureau are in the midst of a week wine cellar-emptying girls’ “night” out, and miss the whole thing.

Riel has long since had his fill of his situation, but Gemnemo is unsympathetic; he wants his latest experiment to play itself out to its devastating conclusion, with him pulling the strings the whole way. Riel now knows how solitary it is “at the top” of the city’s food chain.

For such an action-packed episode, the first act is mostly Riel fondly remembering one fine day in Central Park (or whatever it’s called in HSL) with Leo. When a batted baseball breaks Riel’s arm, Leo goes to bat for him, not only standing up to the bully that hit the ball and laughed at Riel’s arm, but headbutting him.

Leo didn’t back down on that lovely, pastoral day (it really is a gorgeous memory accompanied by an appropriately wistful musical score), despite being small and relatively puny; Riel, on the other hand, is disgusted with himself for running away in a similar situation.

Now that he’s more lucid, he can see Libra members not back down even though their opponent is orders of magnitude bigger and stronger. And with infiltration expert Chain indisposed, it falls to lil’ Leo and Sonic to deposit Li Gado’s weapon into Riel’s giant body. Leo has to take his God’s Eyes to their absolute limit, but he’s not giving up on his friend.

Gado makes it clear that Riel is probably not even in control of his body any more, as Gemnemo is a control freak who responds to Riel’s second thoughts by starting an operation that will eliminate his free will—but not his senses, making him watch and hear all the millions he’ll kill.

Gemnemo, in the end, is just another bully who has exploited Riel’s need to be stronger for his own scientific gain. Thankfuly, Sonic gets to Gemnemo in time to stop him, and Riel’s giant body gradually shrinks, until he stumbles and falls into the Eternal Hollow. 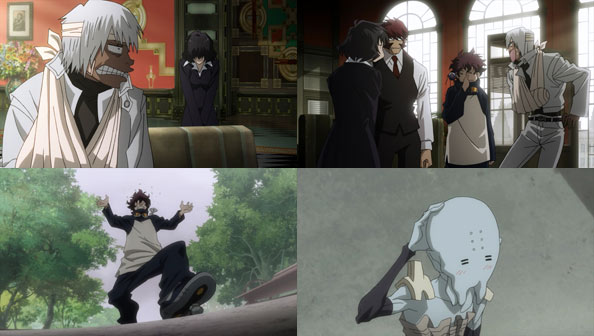 In the aftermath, Zapp tries to excoriate a contrite (and likely hungover) Chain for being AWOL during the battle, but Leo steps in to remind Zapp that he was indisposed as well due to his attempt to swindle Riel when he was more human-sized.

Five days later, Leo has a walk in the park, still picturesque and tranquil, but seems lonelier without Mr. Riel by his side. All of a sudden, he notices something under his shoe: Gado’s weapon shrunk Riel to the size of a mouse!

But Riel is actually just fine being this size; for one thing, the view’s not bad (Leo now appears monumental to him, matching his bravery and loyalty to his friends); for another, he wouldn’t feel right being all the way back to normal after the fuss he caused.