In the winter days and weeks since the loss of Antarcticite, Phosphophyllite has been busy. As the snow and ice starts to melt, heralding the start of spring, we get a very cool slow-build reveal of the individual Phos has become: serious, dutiful, efficient; calm, cool, and deadly. Sounds kinda like Antarc, doesn’t it?

The time jump to Spring wasn’t a surprise, so much as the intense change in Phos, and I have to say, I like it. Even Kurosawa Tomoyo’s lower, sterner voice emulates Mariya Ise’s Antarc’s tone and cadence. There remains a measure of the old Phos’ spunk and rawness (Kongou catches Phos at the end of a successful Lunarian battle) but overall, Phos has become a polished and capable member of the group—and the only one with a alloy membrane that can take any form. 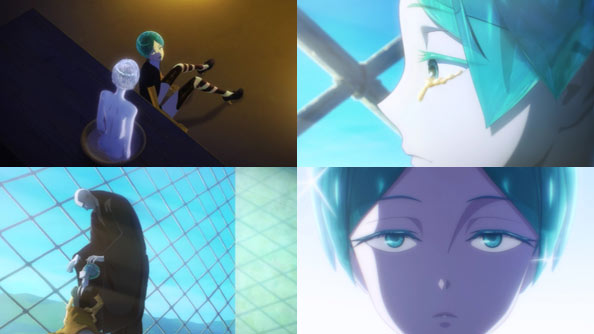 Phos kind of had to, after Antarc was lost; but more than necessity, it is how Phos honors Antarc’s memory; no more slacking off or complaining. Phos also keeps a small shard of Antarc’s remains, and has vivid hallucinations of Antarc resurrecting from the wooden bowl, only to shatter and force Phos to relive Antarc’s final moments. It’s a full-blown case of Gem-PTSD, and Phos can’t forgive herself…or sleep. She also cries gold tears, which is both sad and very cool.

When the other Gems wake up (and are issued Summer uniforms), they’re initially shocked at the change in Phos, then scared of Phos’ alloy membrane, then fascinated to the point of surrounding and demanding that Phos perform a variety of tricks, or be poked and prodded every which way. Phos creates a nifty galloy decoy to thrown them off, but they’re pretty relentless. 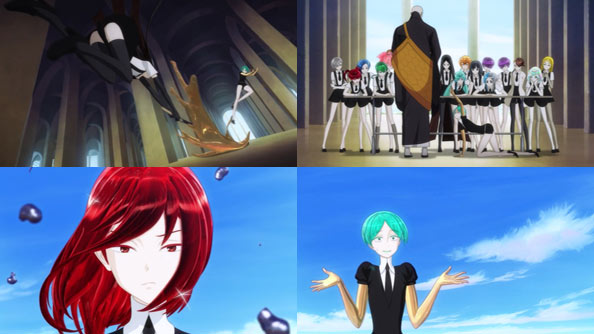 Before all of the events that made Phos the way they are took place, Phos was often derided as being dead weight and a source of stress and extra work for everyone. Now Phos has never been more popular (in a good way rather than bad). The thing is, it’s the old Phos who would have loved such adulation; New Phos doesn’t quite know how to deal.

I imagine part of that is Phos long-term isolation, which aligns Phos more closely with someone like Cinnabar. Phos briefly forgets who Cinnabar is, but when the two meet during a patrol, Cinnabar is as cold and aloof as ever, clearly trying not to dignify the changes Phos has gone through with a reaction.

While Phos can now perform all manner of dazzling parlour tricks (but no longer has any intention of performing them for amusement) Phos doesn’t seem to mind demonstrating to Amethyst twins how much has been learned during the solo training and learning from Antarc and Kongou.

Phos is truly a force to be reckoned with, and has absolutely no trouble throttling another Lunarian attack, to the twins’ amazement and elation. But not every Gem is impressed. Bort cannot believe this is the same Phos who used to cause so much trouble and contribute so little, to the point of suspicion. I imagine a test of Pho’s combat abilities is in the offing.