As part of repaying his debt he feels he owes her, Rei wants to help Hina in anyway he can, and that means getting a new perspective on the matter of bullying. Hayashida-sensei misunderstands at first. Rei isn’t the one being bullied. Indeed, he proudly proclaims his hard-won and long-standing invisibility at school.

When he brings up Hina, then describes her personality in such great detail and then presents his passion and motivation on the matter (“my duty as a human being” and such) Hayashida starts thinking that there is someone Rei likes. Of course, Rei isn’t thinking that way at all; Hina is not just a dear friend, but close to family, and his lifesaver to boot.

Hayashida gives Rei some good advice, including to tread carefully and not make a big fuss at school, lest it just make things worse for the victim, but to instead listen very intently to her feelings on the matter; how she’d like the matter resolved. 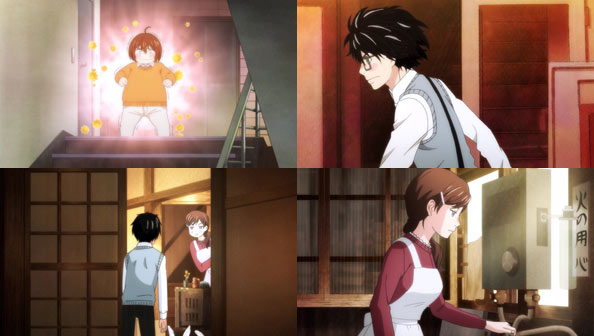 You know Rei is super-serious about this endeavor because he has a back-up plan: if Hina has to change schools or get a private tutor, he means to support her, not just emotionally, but financially. To that end, Hayashida spots a stack of shogi tournaments into which Rei has entered, calculating all of the winnings he’ll amass, which makes him a bit worried.

Despite saying he (literally!) can’t afford to lose again, he does inevitably lose, and is so angry he wrangles an all-to-willing Nikaidou to strenuously train with him. Nikaidou thinks Rei finally has fire in his belly and is utilizing his Best Friend; Rei just wants money to repay Hina!

The next day, Rei helps Akari lug home a whole mess of groceries she got a big sale. When Rei tells Akari his weight, she hurries home to start cooking, and won’t hear of Rei leaving.

There’s something about Rei, perhaps in part his personality; and the experiences he’s had (the loss of loved ones being something they share), that has Kawamotos pour their hearts out at him. Akari feels she can talk to him, and criticizes herself for the job she’s done as surrogate mom to Hina, lamenting she’s “no good.”

Only nineteen herself when their mother died, Akari had barely lived any life before suddenly becoming a mother of two. She did her best, but in hindsight worries she instilled “ham-fisted” ideals into Hina, which led to her predicament with her friend and the bullies.

Akari admired Gramps simply praising Hina’s courage, but she hates the part of herself for wanting Hina to simply run away rather than do something that would cause her to be unhappy or alone. This is, of course, silly; Gramps has lived a long-ass life, of course he’s going to have more wisdom on these kinds of things. Akari is too hard on herself here.

Rei reassures Akari that just as Hina did nothing wrong in fighting the good fight, neither did Akari. After all, Akari raised the girl who saved Rei’s life; that makes Akari his savior too. Had Hina been raised not to be as kind as she is, or to think of herself before others, Rei might not even be there talking to her.

His honest words cheer Akari up, and she fixes a big ‘ol pot of curry for dinner. When Gramps returns from the theme park with Hina and Momo, he complains that Rei is there “again”, but he’s only joking around, and orders him to sit, eat, and stop making him feel like the bad guy.

While stepping back into the house, Hina hands him a cartoon cat phone strap that somewhat resembles him, as thanks for everything he’s done. Hina expects Rei to think it childish, but he tells her he’s moved, and thanks her. It’s such a nice, quiet, warm moment shared between two people who will hopefully be thanking each other for being there for one another for a good long time to come.

The girls are in a spot: a gear has snapped clean in two, stopping the Kettenkrad, and their “last tour” in its tracks. If they can’t get it going, their chances of survival plummet. Chito can’t get it going, and Yuuri won’t help (probably aware there’s little she can do). She just cheerfully sings a little song with one lyric: “hopeless, hopeless.”

Then Yuuri spots an airplane flying in the sky, and Chito spots a woman in a white coat running after it. Hope has arrived, in the person of Ishii, who has taken up residence in an old underground aircraft hangar.

Ishii is a quietly kind yet no-nonsense person. She knows she can’t live in the base forever, so she’s using the plans she’s found to design and build an airplane to fly to the next city (the plane seen in they sky was a prototype).

More than a base, the hangar appears to be some kind of repository of aeronautical history, and just as Chito and Yuuri may be the last two people operating a Kettenkrad, Ishii is possibly the last aeronautical engineer and aviator left.

The girls help Ishii compete construction of her plane, and in exchange, she provides them with food, shelter, a bath (aaaaahhhh) and the part and repairs needed to get their ‘Krad going again, thus probably saving both their lives.

The day of the flight comes, and there’s a sense of finality and longing for the status quo that’s about to be blown to bits by the winds of progress. It won’t stay warm and calm for long; Ishii has to launch now. And she’s glad she has human witnesses for what could be the last manned flight.

After all, it’s only history if someone besides the one making it saw and documented the event. The takeoff sequence is appropriately epic in its portrayal, as is the awe in the girls’ eyes as they watch Ishii achieve flight.

For a few magnificent moments, the plane soars majestically over one of the widest and clearest views of the city we’ve yet seen; loaded with enough fuel to fly 2,000km, more than enough to reach the nearest city, just visible from Ishii’s giant telescope.

But a few moments is all the plane gets; it breaks up in midair, the pieces pathetically plummeting to the ground far, far below. Chito collapses in reaction, but Yuuri spots Ishii in a parachute, slowly descending. She’s okay, but she failed.

Still, Ishii feels a great sense of relief, to the fact she even smiles, which Yuuri interprets as her finally “embracing the hopelessness” all humans in this wrecked world must embrace in order to keep going. She falls and falls and falls, perhaps to the lowest level, but there’s every reason to believe she’ll survive.

As for Chito and Yuuri, they load up on as many ration potatoes they can find and set off in their repaired Kettenkrad, bound for still higher levels of the city. They, like Ishii and Kanazawa, are also a part of history…likely the tail end of it. When they, and whatever other scattering of remaining humans, have passed on, there will be nobody and nothing left but the ruins.

Or maybe, just maybe, there’s hope somewhere out there, waiting to be found. And maybe Yuuri wants to be proved wrong.