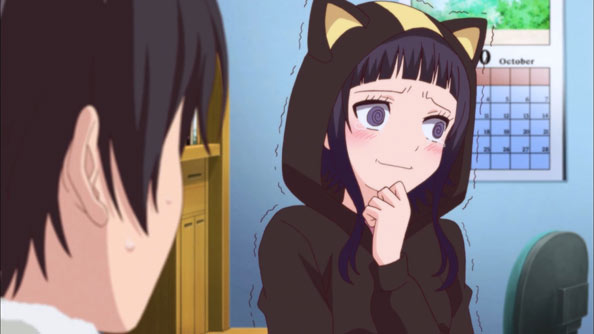 After Haruka learns Akiho is a lot less comfortable sharing an umbrella in the rain than walking in it and getting her shirt wet (revealing that she’s not nearly as raunchy as all the research she’s collected suggests), we spend a seemingly impossibly long time with Haruka’s moe sister Kana, who is really annoying.

She’s only a year younger than her brother, and learning he has a girlfriend is a shock. Thankfully, after meeting Akiho, Kana realizes it’s not the end of the world; indeed, after some posturing, the two get along swimmingly, much to Haruka’s relief (and after clearing up some misunderstandings)

Akiho is class rep, which means it’s her job to fire up the class to do a formal cleaning, which she does with a stirring speech that inspires the boys about not letting their rooms get so dirty their moms clean them and find their dirty mag stashes.

Akiho is very prone to misunderstandings, so when she hears two guys equate switching girlfriends to discarding trash, she gets very nervous. Luckily Haruka is a sentimental guy who doesn’t like to throw stuff out, but treasure his “personal belongings”, which she also takes as meaning she’s safe from being discarded.

After watching an anime perpetuating the girlfriend making lunch for her boy, Akiho exposes one of her weaknesses (besides taking almost everything anyone says or does the wrong way): she’s a bad cook. What a shocker! Interestingly, Haruka doesn’t even get to try the eldritch abomination; Akiho keeps it away.

Instead, after seeing how good Shizuku is, she begs her senpai to be her cooking master, and in between the inappropriate arrangement of vegetables and the use of many a double entendre, they whip up a mean pot of beef stew.

When Shi asks for Haruka’s banana for desert, he seemingly calls her bluff, making her flustered…but he’s really just giving her his banana (this was a stretch, as they’re in Shi’s house, so they’re her bananas, surely). 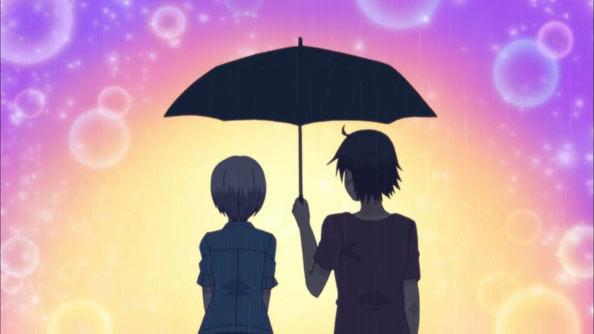 Haruka walks Akiho home, but it’s raining again. Both have their own umbrellas, but Akiho decides to take a little step forward by pretending she doesn’t, so she and Haruka have to share, and walk close together so as not to get wet.

ShoB***ch is the definition of pleasant, lightweight rom-com fare. I still found Kana and Shizuku a bit too intrusive this week, and I’m hardly optimistic about the prospect of still other girls entering Haruka’s orbit, gumming up the works. While they’re tolerable at the moment, the show shines when it’s just Haruka and Akiho, with Yuuki Aoi delivering a nice low-key performance with the occasional burst of passion.

One thought on “My Girlfriend Is ShoBitch – 02”