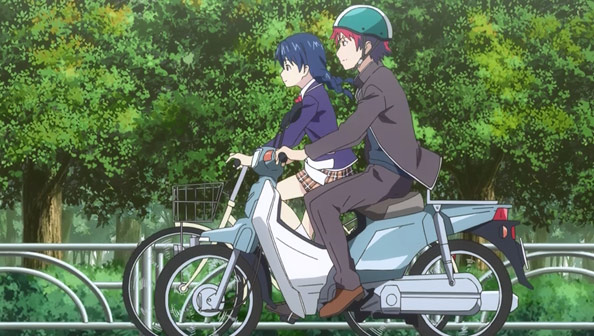 Food Wars is back, baby! FWIII. It’s a brand new autumn, Souma’s got a brand-new scooter (which he rides at low speed so Megumi can keep up—nice!), and it’s almost time for something he’s never heard of: Totsuki’s Moon Festival, which will feature many a food booth, including some from the Elite Ten. 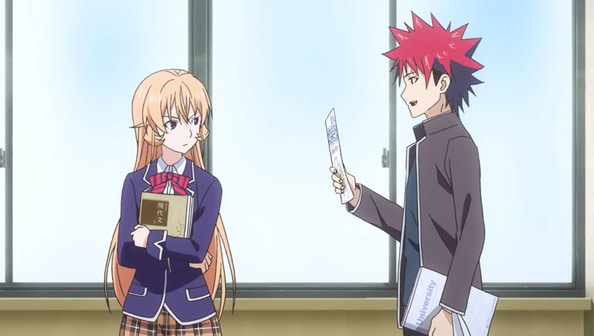 Souma picks out one of the friendlier-seeming of the group—Eighth Seat Kuga Terunomi, voiced by Kaji Yuki—and gets him to agree to a Shokugeki with his seat on the line if he can cook him something good. Megumi, Erina, and many of Souma’s other peers can only sigh at their poor friend displaying his appalling naïveté once more; trying to go up against Kuga and outsell him with half a plan is like simply walking into Mordor: One Doesn’t Simply Do That. 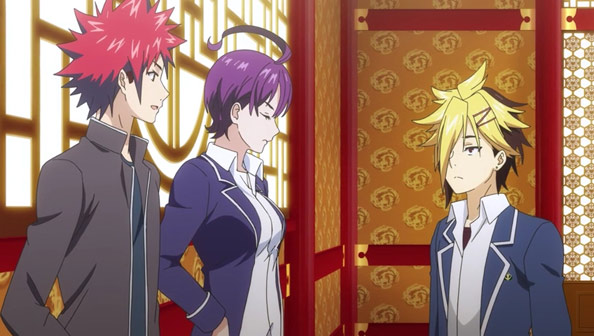 But this is Souma we’re talking about: he does things whether they’re done or not, sometimes without even knowing the significance of his actions. Since Kuga’s specialty is Chinese cuisine (specifically Sichuan) Megumi introduces him to Hojo Miyoko, who then takes him to Kuga’s well-oiled machine of a club where legions of identical baldies cook perfect Sichuan mapo tofu (one of my personal faves) perfectly before Souma’s eyes. 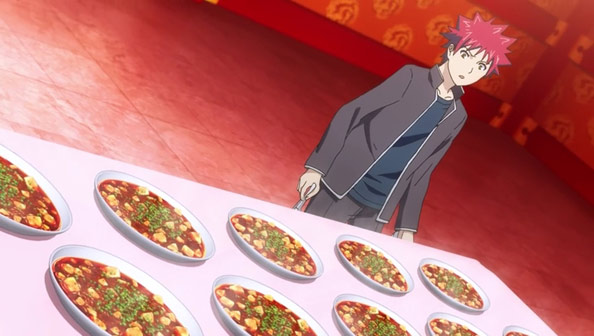 While a supremely confident fellow, Kuga’s team’s performance does finally impress upon Souma the weight of what he means to accomplish. It also helps to learn certain important details about the festival he means to dominate, like, say, the number of expected daily servings (>1,000) or the different sections of the festival (ranging from low-cost, high-volume main street to the rarefied air of the no-limit Yamanote area. 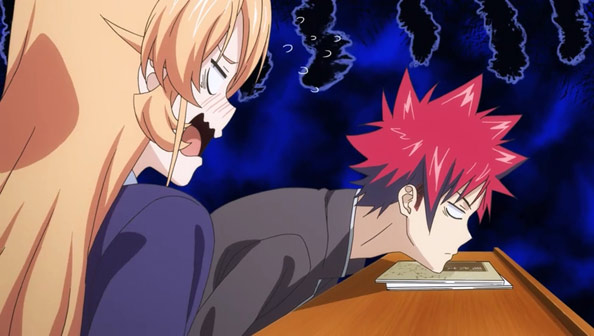 Souma, antagonizing Erina without even trying as usual, spends the days leading up to the application deadline mulling over how he can possibly compete seriously against an immensely powerful and popular force like Kuga, but it’s his proximity to Erina that allows it to dawn on him: he’ll leech excess customers off Kuga, like he did with Erina.

SnS settles back into a groove almost as effortlessly as Erina gets pissed off by Souma. While focusing on Souma, Kuga, and the upcoming festival, it casually reintroduces the core and a few key secondary and tertiary characters from last season. The intro to the complete Elite Ten was a bit overwhelming, but obviously Souma will only be dealing with one at a time.

Oh yeah, and if his booth loses money, Souma will be…EXPELLED. *GASP!* Hmm…now where have I heard that before? That’s a hollow threat and I won’t fall for it, show. Nevertheless, for Souma and his challenge of the master of spicy Sichuan cuisine, the heat…  ( •_•)>⌐□-□. (⌐□_□) will be on.