Yumeko considers Ryouta a friend—even to the point of first-name terms—but he doesn’t seem like her romantic interest. At the moment, that seems to be gambling itself, with only the highest of risks giving her any kind of pleasure. But the OP strongly suggests a very close relationship to come with the yuki-onna-looking student council president, Momobari Kirari.

In a bit of necessary exposition, Ryouta tells Yumeko that ever since Mombari rose to power (winning her position from the predecessor with gambling, natch) the bullying of the “livestock”—the 100 or so students with the least luck and hence most debt—has intensified exponentially. Thanks to Yumeko’s gift, Ryouta is no longer a “Fido”, but after her defeat Mary is a “Lassie”, and doesn’t take to it well.

But Yumeko has little time to concern herself with those she’s already beaten; she seeks a stronger opponent, and this week they come to her: the youngest member of the council, first-year Sumeragi Itsuki, daughter of a multi-billion-yen toy company CEO.

Itsuki challenges Yumeko to a game of “Double Card Memory” involving two freshly-opened decks of cards provided by Itsuki and—as I figured—also manufactured by her dad’s company so that she can cheat people.

For the second straight week, it would appear that those at the top of the pile at Hyakkaou Academy aren’t there by playing by the rules or even being exceptionally lucky—it’s more a matter of creating a way to make your own luck. 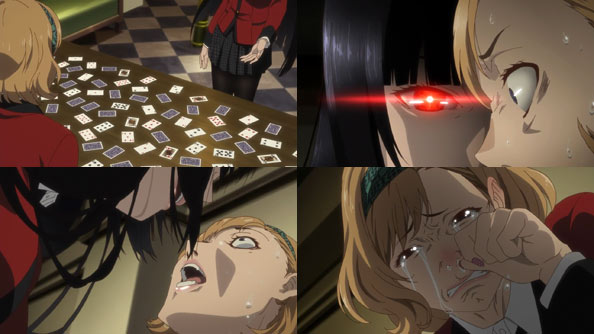 In the case of Sumeragi Itsuki, she uses a tiny part of the back-of-card design to let her know which deck is which on the table. Once she beats Yumeko in the first match—winning the 20 million she fronted Yumeko—Yumeko tearfully begs her for a rematch, even agreeing to go along with what Itsuki wants Yumeko to front: her fingernails and toenails, which Itsuki obsessively collects and decorates. Ew!

Unfortunately for the freshman, Yumeko not only has exceptional memory, but saw through her trump, and never gives her an opportunity to flip a single card in the rematch. It’s only when Itsuka goes a bit mad that Yumeko gladly joins in the madness. And when she recommends Itsuka wager her nails, it reduces her opponent to big soppy tears.

Yumeko responds to the shameless display with disgust; after a second “gamblinggasm”, Yumeko has been made officially “bored” by the simpering Itsuka. On to the next victi-er, opponent.

President Momobari quickly hears of Sumeragi’s defeat and Yumeko’s quick rise, and instructs the rest of the (very eccentric) student council to start “meddling in her affairs,” clearly intrigued by this newcomer and eager to test the limits of her prowess—if they indeed exist!

Ryouta accompanies Yumeko to the after-hours games at the traditional culture research club, and come upon yet another pathetic scene: Saotome Mary digging her debt-hole over 49 million yen deeper. I wonder if this will be an ongoing thing with Mary losing more and more, or if Yumeko will find it in her heart to save her first victim the same way she saved Ryouta, who was only ever nice to her.

In any case, I’m enjoying the friendliness and politeness with which students challenge one another, a facade which gradually devolves into face-contorting madness, over-the-top posturing and yelling, and the aforementioned “gamblinggasms.” Kakegurui can be thick on the explaining, but is generally just flat-out fun.