This week is a non-stop, bloody, gory, slimy, and above all mobile episode. With only the occasional momentary flashback rather than an episode dominated by one, we stay in the present, where there is quite a bit going on. Sure, the background sounds are reduced and time seems suspended at times, but everyone’s minds are still racing, wondering what the heck to do and who the hell to trust.

When Krista pops out of Ymir’s mouth, Ymir emerges from her Titan’s neck to tell her she’s using her as a chip with which to bargain for her life, putting Ymir #1 as always (only now with no more self-lying). Krista, er, Historia, wants Ymir to come back with her, but when it’s clear she won’t, she doesn’t give up her friendship, saying Ymir will always have her as an ally, no matter what.

As their lover’s quarrel goes on, Erwin and the scouts catch up, heading Reiner off with a huge horde of Titans right on their tail, and the commander launches a crazy charge that immediately claims his right arm. But rather than scream and ask for mommy as some scouts have done in their final moments, Erwin surprises by continuing to order the charge, and, indeed, charge himself, arm or no arm. We’ve got ourselves a badass here.

When Reiner finally has to move his arms to defend against the Titan scrum, Mikasa makes her first attempt to snatch Eren, but misses Bertholdt by a hair and gets nabbed by another Titan she didn’t see, who crushes her midsection. Jean saves her, but Eren remains in Bertholdt and Reiner’s clutches… 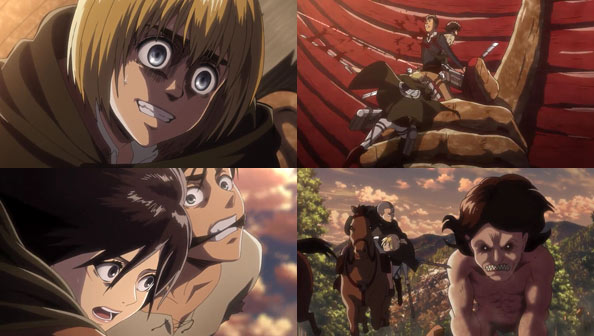 …That is until everyone’s favorite dramatic preview narrator Armin shows up next to Bert and Eren, and after thinking about what he can give up, what he can sacrifice to assure a future, he decides to give up any semblance of diplomacy with the traitors, and brings up their comrade Annie, taking care to go into great detail about the constant agony she’s in as a result of torture.

That gets Bertholdt to lose it and draw his swords to answer Armin’s insults, but Erwin leaps into the frame and relieves Reiner of a digit, sending Eren falling into a waiting Mikasa’s arms. After scoring her first Titan kill protecting Ymir, Historia is snatched up by Connie and Sasha, but demands they let her go lest Ymir be killed. They think Ymir’s just lying again.

In an effort to wrest himself free, Reiner decides to perform the shot put on numerous Titans, launching them into the sky. One such ground-to-ground missiles knocks Mikasa and Eren of their horse, who runs off, leaving them alone, on foot, on the ground with not just any Titan approaching their location, but the Titan that ate Eren’s Mom back in the first attack.

Is Eren healed enough to transform and get some payback? Will Mikasa’s internal injuries keep her from fighting 100%? Can help arrive in time? Will anybody get back to the wall? What will become of Ymir and Historia? So much to be resolved with just one episode remaining…