(For this week’s Re:C I’m filling in for Franklin, who is currently battling a bit of a backlog in both inbox and anime queue. Ganbatte, Oigakkosan! —Hannah)

After learning her creator died in an auto accident, a rudderless Meteora does a fair amount of soul-searching, starting by purchasing the game she’s in and playing it all the way to the end, in an effort to both learn more about herself and the person who created her, in hopes that information will help her make an informed decision about what to do next. 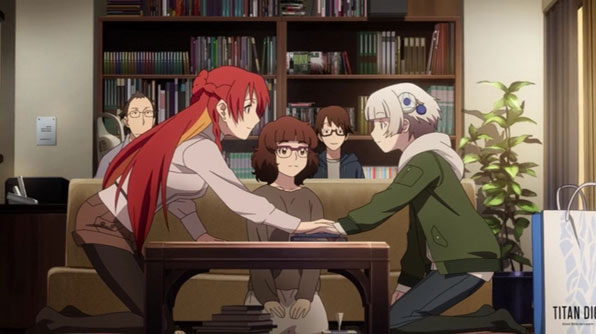 She painstakingly reports all of this to the others, as well as presents her hypothesis about this world only being able to take so many “translations” of creations before it crumbles under the weight of all the “contradictions.” For the fourth straight episode, this involves Meteora talking and explaining in a measured tone for an extended period of time—until the sun sets outside, in fact.

And while it does manage to hit some emotional beats towards the end—basically, she likes her creator, his creation, and wants to fight to get everything back to the way it was—it once more expose’s this show using such scenes as a crutch to keep the audience appraised. It’s too much tell and not enough show.

The chatting continues in a dark warehouse, where the onna-kishi Alicetelia has captured her creator and forced him to revise her world so there isn’t so much dang war, only for it not to work. The Military Uniform Princess assures her that this is an our worlds-vs.-their world situation, she’s leading the revolt, and could use able warriors like Alice.

We meet Beardy, who like Yuuya is content to have fun in this world for a time, and not in a rush to return to his world. Mamika also softens “Alice-chan’s” character somewhat by questioning rash side-taking, especially with people like the MUP, while tucking into boil-in-the-bag curry, the package of which bears Mamika’s likeness.

One of Matsubara’s fellow creators then calls him, informing him that one of his creations—a young mecha pilot—has suddenly appeared, along with his mecha, who on the surface looks like he’d be on Team Celestia/Meteora. That leaves just one more main creation from the promo art and OP to introduce: the Oushino Ougi-esque Chikujouin Makagami, who looks more like Team MUP.

As this is a 22-episode run, it’s not unusual to not have all the main players introduced after four episodes. But there remains a sluggishness and a feeling that we’re not seeing as much of the potential of this premise as we could, and are instead hearing a whole lot about it from static characters as other characters sit around in rooms listening.

To be blunt, I’m eager for Re:Creators to get out of those rooms and start kicking some ass out in the world. With the lines starting to be drawn among the creations according to how they want to proceed, hopefully we’ll get more actual confrontations soon.