Whither Yamada Elf goest, so to does Eromanga-sensei (the show, not the artist). Starting out as a caricature of a super-arrogant, condescending brat with delusions of grandeur, Elf’s become a lot more balanced in the last two episodes.

She also reveals that delusions aside she’s a highly capable, multi-talented person, as evidenced by the lovely, tasty-looking meal she lovingly prepares for Masamune. The reason she’s happy to cook is that she gains perspective on how characters in her stories feel when they’re cooking for those they have their eye on.

Sagiri has also picked up on the quickly evolving relationship between Yamada and Masamune (even if he doesn’t see Yamada as a serious love interest), and calls Masamune a liar for saying they don’t get along, when he’s clearly there all the time.

Combined with the result of bringing up the drawing of large-boobed women (Sagiri can’t do it because she doesn’t have them herself), Masamune ends up shut out of her bedroom once more, though the core of her disappointment is his refusal to come clean about the neighbor.

The day the two authors are to reveal their stories to one another, Masamune arrives at Elf’s house to…no welcome whatsoever. I fully expected him to barge in on her working (or doing something else) in the nude, but I was pleasantly surprised when he found her all covered up.

Specifically, she’s in a very practical sweatsuit, with bags under her eyes instead of ringlets beside them, and a very serious look on her face. This is all Masamune needs to realize all her talk about writing light novels being a mere “hobby” is a bunch of codswallop.

More evidence is presented when the two read one another’s manuscripts before turning them over to Eromanga-sensei. He’s reliably blown away by her story, a page-turner seemingly perfectly tuned for Eromanga’s stylus, right down to the small-boobed characters in cool outfits. But Elf is also blown away by Masamune’s…just not in the same way he is by hers.

It’s not that her story is in any way worse—on the contrary, it would likely sell many orders of magnitude more copies than his—it’s that this isn’t a competition for the most bankable LN. It’s a competition for Eromanga’s services and after reading Masamune’s manuscript, Elf is so sure she can’t compete, she tosses her manuscript straight into the shredder (much to Masa’s dismay).

Reading it also confirms to her that Eromanga-sensei is his little sister next door, and that’s why she can’t compete: it’s a 300-page love letter, for chrissake. It’s not even meant for any other reader but her, which is why Elf is both outclassed and beet-faced she read it at all.

When Masamune finally gains access to Sagiri’s room—via the window in a frankly needlessly reckless stunt that could have gotten him killed and resulted in ending up in a very lewd position with Sagiri beneath him. There, he learns why she hasn’t opened the door for him in two weeks: she doesn’t hate him, she’s been improving her drawing, both battle scenes and bigger boobs. 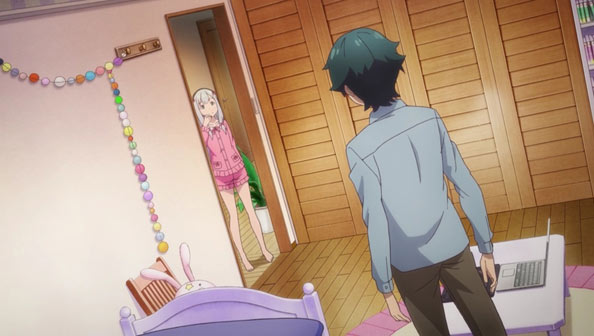 Her take on his dalliances next door was that the neighbor was a rival artist trying to take “Izumi-sensei” away from her, while he kept the wager secret because he was worried she’d be seduced by the more famous and successful Elf. With the misunderstanding cleared up and his victory sealed (she’d never leave him for another author), she reads the manuscript.

Like Elf, it’s embarrassing for her to read; doubly so since it’s about her. And while she considers it an interesting story, he’d never be able to release it as a book, because it’s just too personal. She also, not in so many words, rejects the implied confession the manuscript represents (at least, Masamune seems to take it as a rejection).

Masamune is fine with that rejection, but he’s committed to re-working the story into something he can show to his editor, something that will sell and garner a huge audience, and eventually, get awarded his first anime adaptation, putting him on the same level as Elf. Most importantly, his goal is to get Sagiri out of her room so they can watch the first episode of their anime together in the living room.

While I thought this was Masamune going too far and was sure it would put Sagiri off, I am surprised yet again when Sagiri take a couple steps outside her room; the first steps in many to come on their quest to create an anime-worthy book. Let the goal-striving begin.