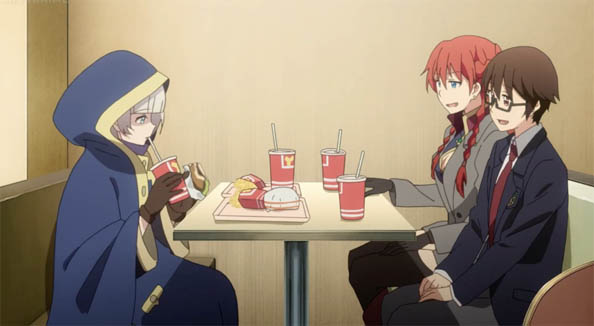 The Gist: Meteora directs much of the opening story and through her, we learn that the creation effect is not limited to one art form nor main characters. She is an NPC that begins the ending section of an RPG Souta remembers enjoying, after all.

A great deal of eating and exposition later, Souta helps locate the company that created Meteora and the individual that created Celestia. One Mr Matsubara, who agrees to meet them in public. To Celestia’s chagrin, he does not live up to her expectations as a god, let alone a clever man she would associate with. 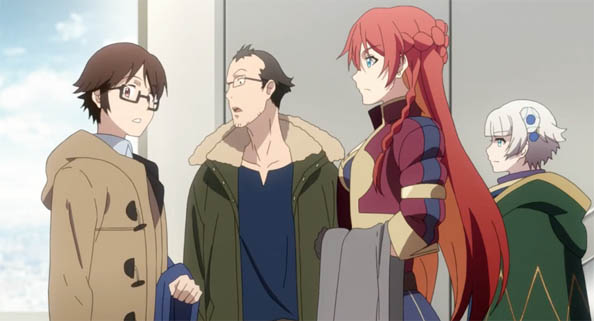 Then Magical Slayer Mamika shows up, apparently having been sent at them by the ‘Military Uniform Princess.’ (AKA Gunpuku no Himegimi) As a ‘Sailor Moon’-themed creation, she isn’t especially reasonable to negotiate with, nor intelligent, nor ready when her magic attacks cause pain and blood…but she is seriously strong. Much stronger than Celestia without her mech.

Fortunately (or not), Mirokuji Yuya shows up at the end and shrugs off Mamika’s attack with ease. According to Souta, he’s the final boss villain of another game called Exclusive Underground. Where this is going, exactly, and how it will not result in at least one of these characters quickly getting killed off, remains to be seen next week.

The Verdict: The concept, sound design and animation continue to be top notch this week. Mamika’s magic sound, which is like a cutesy popping bubble, was delightfully bizarre and great contrast to the ‘cool’ designs of the other characters. I loved the music in the opening theme and throughout the episode as well.

Unfortunately, all the exposition around the concept and connecting the cast with Mr Matsubara came at the expense of good pacing. The opening two thirds dragged and the ending third felt rushed. Additionally, while I loved the opening theme, it immediately spoiled several characters appearing in the show to come. That didn’t do Yuya’s extremely short and clunky introduction any favors.

Ultimately, setting the stage for a fanfic mashup world should provide a good series in the long run (22 episodes, to be exact—ed.), but the speed at which thematically discordant characters have been thrown together, and uneventfully thrown together, just didn’t work this week.

Hopefully, the remaining characters will get more time to breathe on their introductory episodes. Otherwise, the crispness of the production and the curious premise will lose their shine quickly.