All the clues and hints have been laid out, ready to be taken and fitted together to get the larger picture around Jean Otus, who for a protagonist halfway into a show remains either deliciously inscrutable or, as Franklin has said, exactly as vapid as his surface indicates.

Mind you, the larger picture of Jean and his sister Lotta only seem to be part of a yet larger picture, one that both Grossular, Niino, and his second mystery contact would seem to know about. 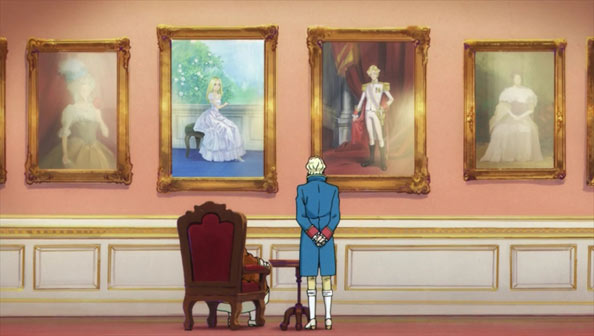 For the whole run of the show, I’d been trusting my instincts, which told me Lotta was important. Why else would the King and prince be so naturally drawn to her, and why else would someone who looks an awful like her be the dancer in the end credits?

The blonde hair; the blue eyes, the affinity for sweets and the royal district of Dowa, and of couse, all the swirlings of a coup—all of it points to Lotta and Jean Otus being themselves royalty. The flashback threw me off the scent, but their parents who died on the train were the second princess and her guard Abend.

That, as Mauve reports to Jean in her home district of Korore (which is both a strong matriarchy and a chocolate superpower) makes Jean Otus first in the line of succession for the throne of Dowa.

It also explains a great many things about how people have been treating him all this time. Naturally, Jean, who “never asks questions about himself” but merely carries on, didn’t have a clue.

While this revelation is delivered the same way any information is—in a suble, natural, understated fashion—it still raises the stakes considerably. Even if Jean doesn’t care about his lineage and won’t get in Prince Schwan’s way, Schwan is still gunning for him, big-time.

Assumptions and suspicions will play a larger role than Jean’s actual intent or desires. Jean and Schwan are opposites when it comes to how much they care about how they’re regarded by others. And then there’s the fact that Prince Schwan has (probably) never left Dowa, but Jean has traveled all across the nation, never knowing it was, in effect, a royal tour.

Now that Jean knows one more thing Niino knows, their relationship doesn’t seem to change much. Jean still relies on him to tell him the specific bakery where he can get snowballs Lotta requested (which happens to be where the King himself stops by for some sweets), or the best chocolatier in Korore.

But while the mystery of Jean and Lotta may be solved, the bigger mystery is what comes next. What will Jean do with this information, once it inevitably gets out? Who will be on his side, and who (presumably anti-ACCA parties) will support the more malleable Schwan?

Things are finally starting to heat up in Dowa…and I’m not talking about the warmth of fresh-baked pastries.