No matter how much ass Aqua kicks, she always finds a way to negate every positive contribution she makes to the party. To whit: the magic circle she set up in the dungeon a couple weeks ago is causing monsters to pour out and cause a big to-do. So the gang has to go back to the dungeon and sort it out.

Megumin continues to wisely stay out of dungeons, and this time Aqua joins her in passing on the adventure, so this time Kazuma is paired up with Darkness. Both of them have complicated feelings on the matter of being alone together in dark places. 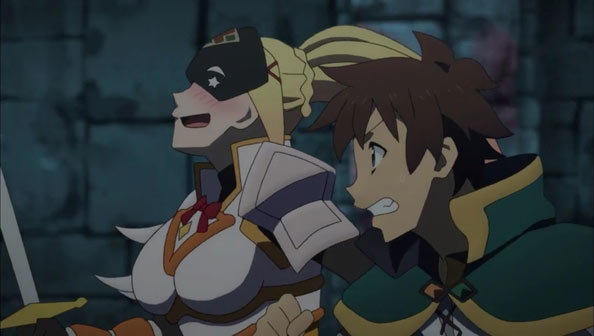 In a twist, no less than a commander of the Demon King’s armies, Vanir, has set up shop in the dungeon. Vanir is your typical blowhard villain, though he brings some vibrant enthusiasm and tongue-in-cheekness to his role.

After some initial success making contact, Darkness is unable to land a hit, and only manages to defeat Vanir when Kazuma trips on a bit of stone, crashes into Vanir, who by sheer dumb luck ends up getting slashed. With his body gone, the mask that remains latches itself on Darkness, and the fun begins, as Vanir is shocked to find Darkness is actually pretty okay with being possessed by a demon.

She’s so okay, in fact, that every time Vanir thinks he’s achieved “full domination”, Darkness chimes back in. The back-and-forth repartee between a defiantly turned-on Darkness and an increasingly flustered Vanir should get old quick, but never does.

Aqua is ready with exorcism magic, but due to Darkness’ intense magical resistance, it’s a big chore bringing him down. Darkness ultimately has to consent to being blown up by Megumin, who, after all, has been practicing as is pretty good at making a big-ass explosion.

In an even bigger twist, in light of defeating Vanir (and the mobile fortess earlier), Sena and the state she represents lifts all suspicion from Kazuma (who did, after all, help defeat a Demon King Commander right before her eyes) and the party still clears 40 million eries after their debts are taken care of.

Not a bad night’s work in the dungeon, and entertainingly done in the zany, hyper-caffeinated way I’ve come to expect of earlier KonoSuba. I had grown a bit weary of Kazuma & Co. being broke and miserable; it’s good to see them enjoy a victory, even if something might come up early in the next episode that’ll slap them back down into the muck.

The Gist: Tohru follows Kobayashi to work and gains a better appreciation for Kobayashi’s reliable nature and indifference to pressure. (Even so, Tohru dispenses some righteous justice on Kobayashi’s abusive boss)

For her own part, Kobayashi comes to realize that she’s changed a bit over the past few months. She’s happier and more relaxed and knows she owes it to Kobayashi. She can barely remember what she was like before they started living together. Strangely, she never expresses this point to Tohru…

Meanwhile, Kana and Riko have a few short and utterly forgetable scenes at school, each of which ends with Riko climaxing at Kana’s touch. (though the climax is trimmed shorter and shorter each time)

Finally, Fafnir tries to get an apartment but, after failing some basic aspects of being human, moves in with Kobayashi’s coworker.

The Verdict: If Little Witch hadn’t just zapped me with a methodically uneventful episode, I may have enjoyed this this week’s Dragon Maid a bit more. Unfortunately, the uneventfulness of the plot barely held my attention.

Sure, Tohru’s surprising appearance on the TV magic show as a payoff to the not-learning-magic plot was expert level joke-craft, and it’s somewhat funny to see Fafnir crop up in two unrelated animes this week, but the sum total of events this week equal: Fafnir moving to the human world more permanently and Tohru telling him she is in the human world to stay.

Sprinkle in some longing looks and the as-yet-unrevealed why Tohru is obsessed with Kobayashi and that’s neither character growth or eventful plot developments to cling to.

Ultimately? It’s watchable, pleasant, and a bit more engaging than this week’s Demi-chans, but not as visually striking as Little Witch, nor as frenetic as its own previous outings. Hopefully, something more will develop soon…