Bon is our eyes and ears for most of this episode’s first half as he follows Renzou’s bro Juuzou, suspicious of his movements (and of the trail of bodies in his wake), until it’s revealed those exorcists were knocked out by Mamushi, not Juuzou.

Having been told about the eye when she was a student of Todou’s, her general argument is that neither Saguro Tatsuma nor her own father can be trusted; that they are the real traitors, and she’s acting in the best interests of the Myoda Sect.

I for one am glad the obviously more sinister-(and awesome!)-looking suspect, while indeed the traitor, at least has halfway viable reasons besides “I’m just evil BWAHAHA!”, though it does take quite a bit of exposition to get her somewhat complex positions and accusations out.

Meanwhile, Rin is making progress with the candles on the roof when the whole earth shakes. He starts to run off but Shura catches him and forbids him from moving and acting on his own, lest he be “put down” as per the agreement that spared his life (for now).

It’s also good to see Todou back so soon, even if he claims Mamushi is acting on her own (clearly he’s been manipulating her for some time). There’s something appealing about his frumpy, unexceptional, harmless functionary look; especially contrasted with everyone else’s more traditional garb (Shura aside). Mamushi grabs the eye, and she and Todou skedaddle.

Tatsuma prepares to go after them, but Bon wants a goddamn explanation out of him, now. Tatsuma, for whatever reason, won’t or can’t give him one, only saying “it’s a secret” and other fatherly platitudes to stay out of trouble and be patient. It’s not enough, and Bon all but disowns him, warning if he runs away he better not come back. 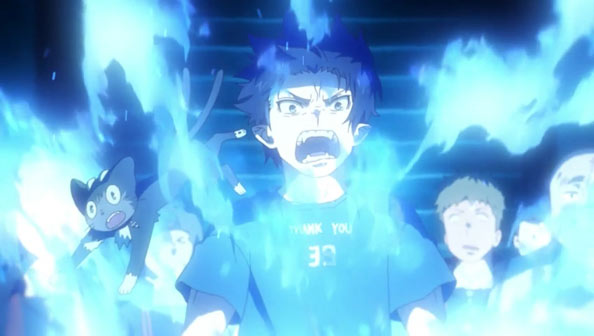 Those sentiments set Rin, who had been pretty passively in the background, off. Understandably so, as he had a similar falling out with his dad Shiro that was never able to be resolved, since Shiro died. Rin may want to repair his friendship with Bon, but trying to stop him from making the same mistake, something he’ll regret forever, takes precedence.

Of course, Rin gets so worked up, his blue flames come out, scaring the crap out of everyone who didn’t know about them and forcing Shura to knock him out with the shock collar-like ring on his tail, but not before he calls her a hag and tells her to buzz off. I admire Rin’s passion regarding Bon, but he really does need to realize how short his leash has become.

Honestly, I wanted to rate this episode higher, but it had a bit too much standing around talking/explaining, the flashbacks to the trial seemed redundant, and I’m bummed Mamushi’s pretty much a bad guy right now and it’s not certain at all whether she’ll be redeemed.