All we needed was the slightest look from Reina to know, with relative confidence what was amiss and why: Thanks to Hashimoto, Reina learns that Kumiko knew about Taki’s wife before she did, and she’s angry Kumiko never told her.

Whether Kumiko was busy with Asuka and the other girls, and was going to eventually tell Reina, we’ll never know. But we do know that Kumiko hesitated as long as she did because she didn’t want to hurt Reina.

During Reina’s suitably elaborate procedure for confronting Kumiko – by going to the summit of the mountain that seems to accentuate Reina’s beauty – Reina yells at the top of her lungs, asks Kumiko why, and gets the answer she already knew. 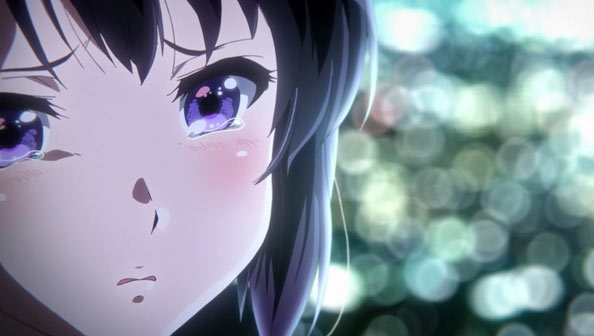 Reina turns out not to be that mad at Kumiko after all, but at herself: at the weakness she exhibits upon hearing this news; the fact she didn’t know. Her armor has cracked just as the Nationals approach, and while she can say she’s going to “forget about it” until they’re over, it’s likely she’s not 100% sure she can follow through.

Kumiko, for her part, tells her she’s still rooting for her, making sure Reina hears that Taki isn’t married anymore, even if it’s hard both to say and hear. She’s almost making up for not telling her to begin with.

It’s another wonderful scene between the two friends, and a very welcome one after Reina’s presence had dwindled in recent eps. Both the animation and the voice performances soar. 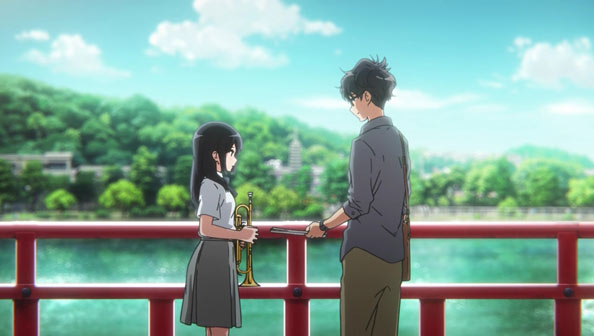 In a quick flashback, we see a young Reina first lay eyes on Taki and fall for him right then and there. She quickly finds how hard it is to follow through, having an elaborate, warm daydream in which Taki compliments her playing and gives her a piece just for her to play.

She’s ripped from her reverie by the real Taki-sensei calling her playing “weak.” She needs to get it together. But how?

Reina finds a way. While delivering the practice room key back to Taki at the end of the day with Kumiko, Reina asks him about his wife. Not about where she went to school or who she knew, but what she was like.

Taki opens up to her, and confirms what Reina had suspected, but wasn’t ready to face until now, when her playing is being effected by the doubt. There is not doubt; Taki still loves his wife, and he very likely became their director for his wife’s sake. He wants to go to the Nationals and win Gold for her sake.

And so, we see both Reina and Taki at their most vulnerable and emotional this week. I guess Christmas came early!

Having gotten all the answers and confirmations she needed for the time being, Reina returns to normal, and starts playing the way she and everyone else have come to expect. Niiyama gives her the location of Taki’s wife’s grave, where takes Kumiko and prays.

That flashback was the beginning of Reina wishing time would move faster for her, so she could catch up to Taki. But now she has another goal to set her sights on, something that she wouldn’t have been able to accomplish if she was his age: She’s going to help Taki win Gold.

The Gist: Cockroach-chan takes Qi-girl head on and gets a whiff of victory… yes, literally. Ultimately, after a lengthy duel that breaks Qi-girl’s mind and turns her hair white, they are still at a standstill.

Meanwhile, Neko-chan and the other girls who’s names I don’t remember defeat a magician who pulls cards out of her butt and a girl with green hair who joins with the magician to form a combination-attack form. Yes, they literally share a swimsuit to do this.

The Verdict: there are a few truly fantastic moments of comedy this week surrounded by dull fighting tropes, unnecessary backstory elements for the villains, and sloppy pacing. Over all, this was a see-saw affair and how much enjoyment you get from it depends on how much the highs charm you and the lows irritate you.

The magician’s butt cards had me giggling like an idiot but her boob flashing and her ultimate KO were a snooze. The combination form with green hair chan was also great, especially due to the sound effects and the hilarious giant-robo style camera angle for their ‘hook up’ but the minutes spent ‘locked butt to butt’ with Pink-chan was totally uneventful on the flip side. Cockroach-chan sniffing Qi-chan’s arse — especially the poor voice actress doing a pig snort — was to die for but the fight itself was bland paste. I don’t care at all about Qi-chan and didn’t need her backstory or second form to pad out the episode :(

The Gist: engage backstory exposition mode engaged! Salt’s father’s mind was destroyed by an experiment to project into pure illusion… or maybe control the destination or a dive? (It has something to do with the stone gate Cocona and Papika used to change Art-Senpai)

Salt got Mimi pregnant, but didn’t know until she and Papika ran away for a year and later brought back by Salt’s father’s army(?) at which point shit hit the fan and Mimi and the lab are lost.

Meanwhile, Salt has been telling Mimi this (I guess?) while aiming a gun at her at the site of the old lab. Mimi puts him down and returns to pure illusion, where she has Cocona trapped but is slowly absorbing parts of reality. 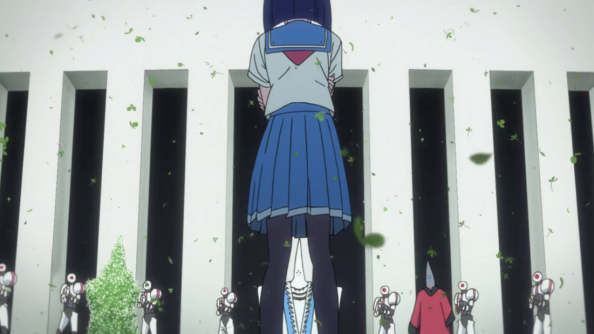 The Verdict: So yeah… info-splaining Cocona’s backstory in one quick swoop, while setting up a final showdown between Mimi and Cocona’s friends is one way to make an episode. It’s not a particularly elegant way and, despite the striking compositions and a few imaginative backgrounds, it wasn’t especially attractive by Flip Flappers’ standards either.

From a structural standpoint, all of the pieces fit, but there aren’t many surprises. Cocona being Mimi’s daughter was not only spelled out last week, it’s been strongly implied all along. Seeing that Salt is Cocona’s father, and seeing specifically how Salt’s father became crazy and caused Mimi to dissappear into pure illusion (and eventually spit Cocona back out?) is not a particularly important detail, given that Salt had nearly no character building to this point and Salt’s father’s role in all of this was already implied last week. 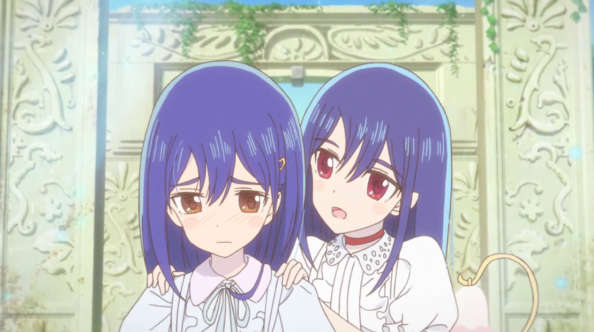 In shorter words, last week’s implications were enough. I’m not even going to talk about the Third Child, who appears to be part of the good guy’s team now, nor the Twins, who only make an uneventful cameo. It all culminates in the same thing: mostly unnecessary retreading and/or abrupt plot advancement for the finale’s sake.

I guess I’m puzzled most by the decision to over explain what was very nicely implied last week, but under explain other elements like Mimi ‘switching places’ with …herself?… at some point, not unlike Papika and Cocona did during the stone gate adventure. :/

The Gist: the final 6 skate off, with Yuri giving the first performance, followed by the skaters from Thailand, Switzerland, Russia, Kazakstan, and Canada. Yuri lands in the middle, having fallen short of his new quad but otherwise performing his tough program well.

The surprise twist comes at the end, with the pressure to perform finally catching up to JJ, who crumbles into last place. Brave face and silly JJ hand signs flown high, he braves his crushingly low score and stands tall before an emotional audience.

The majority of the episode is delivered as a broadcast, with commentators explaining what is going on and skaters sitting in the press booth receiving their scores. These scenes are inter-spliced with interior monologs from the skaters, as well as observations by Yuri, Yurio and Victor, who’s early performances allow them to watch from the audience.

The Verdict: The long build up and tight scripting for each of the cast members is really playing off in the end. There is a strong sense of community, friendship, rivalries and engagement between the skaters and their support people. Yurio’s budding friendship with the Kazak is especially fun, as it pumps them both up in subtle ways, and the results hit JJ’s subconsciousness enough to nerve-him-out of contention.

The result is a believable world with a broad spectrum of likeable people — even when they are jerks — pushing themselves higher. Chris’ performance was especially well animated and, since we haven’t seen the Kazak’s routines at all, his time on the ice was a smart way to keep it fresh. All of the music was wonderful too.

What seals this week’s 10 rating is its master treatment of skirmish before the final battle. I can name few, if any other shows that set the stage for their show down so completely, without being over the top or gimmicy. YOI is matter of fact about it, with real world constraints on the time spent with scores and people. We know those scores, and the emotional placement of each skater. All that’s left is to see who can seal the deal and bring home a gold.