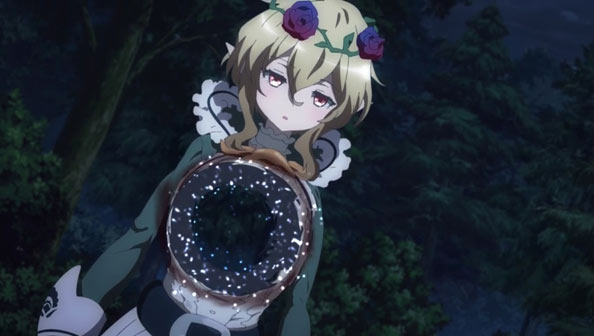 Well, Cranberry didn’t think Swim Swim would be able to kill her, and she was right…but she didn’t account for Tama and her hole-making ability at a crucial moment, leading to the unfortunate state of affairs above, one of the most surprising (not to mention awesomely gruesome) sudden deaths of the show. Cranberry was supposed to be above all this; she was the last girl standing once before, after all. But she wanted to fight strong enemies, and got her wish – and dug her grave in the process. R.I.P. Cranberry. 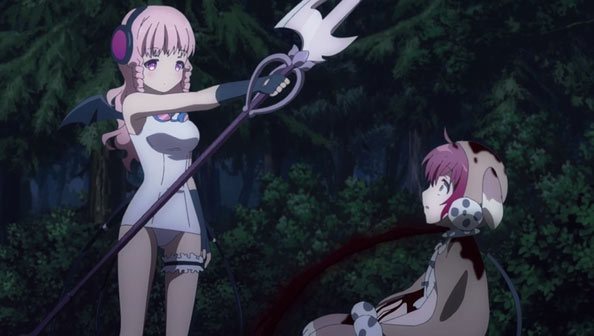 For her, well, dog-like loyalty (and complete and utter lack of guile), Tama is swiftly dispatched by Swim Swim, ever looking out for Number One. Tama saw Swim Swim’s true form, after all, and one of the edicts the late Ruler instilled in Swim Swim — in real life a small, impressionable, dedicated young girl — was to never let anyone learn your true identity. Swim Swim decided that even meant her last and most loyal ally. R.I.P. Tama.

(Incidentally, we got Tama’s backstory as she bleeds out, confirming her guilelessness and indicating she, like Alice, simply wanted to be useful to people. Pretty rote stuff.) 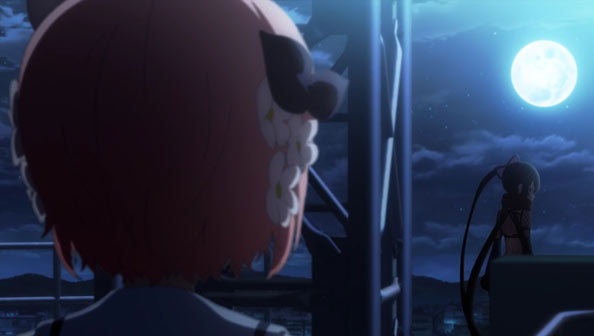 With the shocking exit of Cranberry (and the far less shocking exit of Tama), the last three magical girls remaining are Swimmy, Ripple, and Snow White. Ripple asks Snow to meet, but Ripple just wants any and all intel Snow might have on Swim Swim, nothing more. Snow argues killing Swimmy now will only make Ripple a murderer, but Ripple don’t care. If Snow won’t help her, she’ll go it alone. 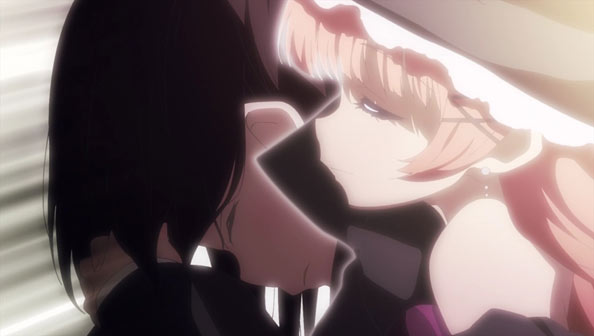 Ripple seems to live only to avenge her friend and mentor Top Speed, the aftermath of whose death has been hard on her. Snow lost a friend last week in Alice, but it was essentially a friend she didn’t know she had. Swim Swim, showing a tinge of the innocence of her real self, sheds a tear at the loss of Tama, but Tama wasn’t really her friend, either, more of a sidekick.

No, Ripple and Top Speed were the best-realized duo on the show — more even than Snow and Pucelle — and it was something Ripple didn’t know how badly she needed until it was gone. Top Speed could see a side to Ripple — to Sazanami Kano — no one else could, either because they were too busy looking her up and down, or because she wore her mask so well. 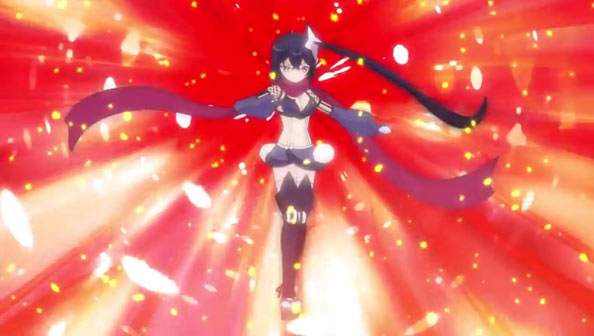 Interestingly, Ripple gets a full-on Sailor Moon-style transformation sequence prior to heading to the dam to duel Swim Swim. The fact it’s a dam means there’ll be plenty of water there (good for Swimmy), but Ripple at least has the hint from Fav (who seems kinda miffed by Swimmy’s apathy with her new role as master) that light and sound are her weaknesses.

I don’t know who will prevail in that duel: judging from past battles, Swim Swim always seems to get the upper hand in the end, but she’s out of allies and now occupies the same seemingly invincible space Cranberry once stood. I can’t rule out a Ripple victory.

Heck, maybe they kill each other, leaving Snow White as the last girl standing by default. That’s the least satisfying outcome: Snow is still clinging to her ideals of what a Magical Girl should be. It stands to reason a show that loves taking things away would take that away from her before all’s said and done. 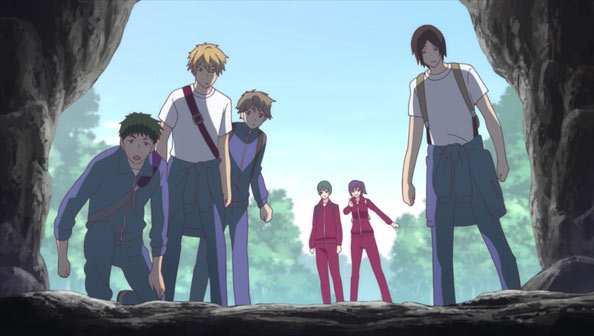 This week marks another single guy-centric episode, but like Shinomiya’s, instead of the same Mutsumi we’ve gotten week-to-week, we get an overdone charicature, only not quite as overdone as the klutzy Shi. Combined with a somewhat lame first half involving a cave adventure that turns out to be pointless and a disaster of a second half, this was Kiss Him Not Me’s worst outing. 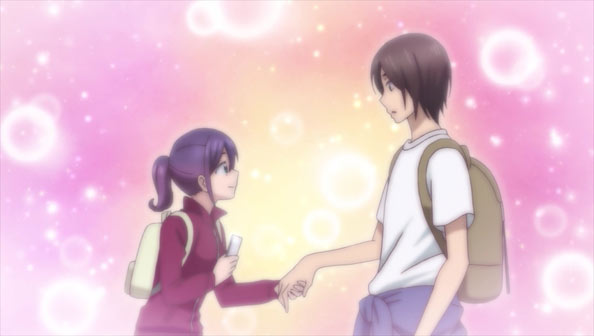 The adventure is stale, and while the idea of Mutsumi not knowing whether he romantically likes Kae (like the others) is interesting, Mutsumi has always been the kind but rather dull one, and having him carry an episode, even half of one, just doesn’t do it for me.

Nor does his sudden intense fear of darkness, which is not much more than an excuse for Kae to take his hand and lead him through the cave. This is a guy who stripped both himself and Kae down to warm up her underheated body. It makes zero sense for him to be so flustered about holding Kae’s hand now. 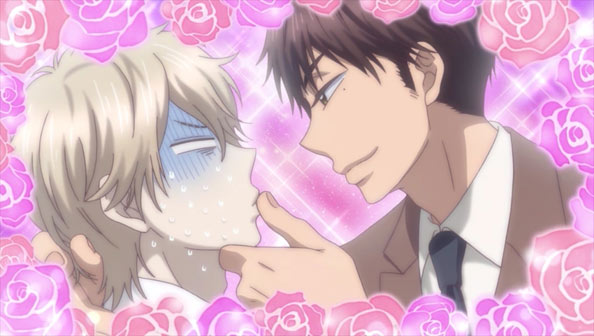 Things only get worse when Mutsumi’s older, creepier brother shows up as a student teacher. Setting aside the fact that his bisexualism (if it’s really even genuine) is handled about as seriously as a show like this could be expected to handle it; this guy straight up tells underage kids he could totally sleep with any one of them. That’s a fireable offense at best. 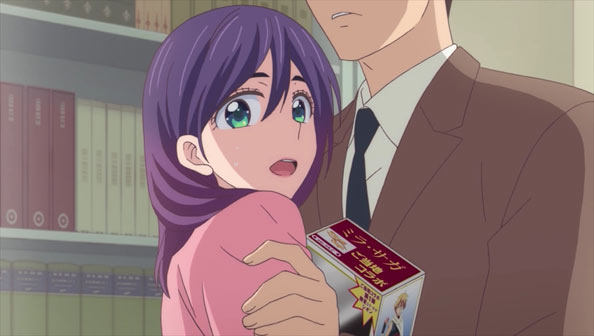 Not only that, he takes an interest in Kae, to the point he invites her to lunch after running into her in Shinjuku (despite her clearly being uncomfortable with the idea), then takes advantage when he has to catch Kae from falling to make a move on her. Mutsumi is able to stop him before anything happens, but the look on Kae’s face is all you need to know to determine that this guy’s a sketchy creep, and I’m not sure how else we’re supposed to see him.

That he intends to “bide his time” until he’s no longer teaching there to “pursue” Kae (without any input from her about what she’d think about such a pursuit) doesn’t make him any less detestable. Even if he’s only putting on an extra-skeevy act to try to motivate Mutsumi to ask Kae out, it doesn’t change the fact he’s being totally inappropriate with a student.

I can forgive this show’s dancing around the whole weight thing, but not this. The fact is, the show just isn’t that funny right now, and that’s a problem. 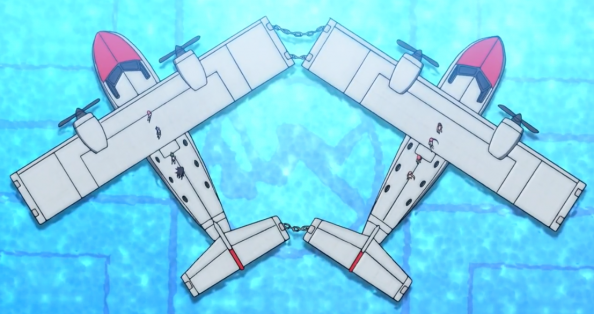 The Gist: the second race is underway and, surprise surprise, Team Pompous gets mauled by our clever underdogs. First, two girls get flung overboard when The Ass of Varja and Hillbilly-chan sync-bounce the seaplane wings. Then Heart-Eye-chan takes out another girl with mutual annihilation. Finally, Hillbilly-chan and Aoba use their roommate attacks to bring down the last opponent.

Unfortunately, everyone is eliminated at the same time and, in a twist, the last Pompous girl uses propeller breasts to stay in the air a split second longer than Aoba, thus winning the match narrowly upon video review. 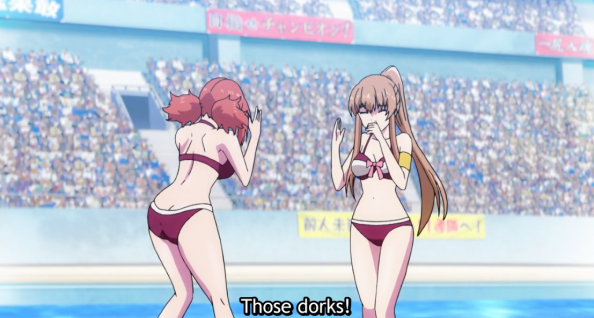 The Verdict: while more watchable than last week, Keijo’s second act remains fairly generic by sports anime conventions. Yes, the various attacks and super powers are silly and raunchy but there isn’t much warmth to the character interactions and, honestly, the novelty has worn off.

Structurally, I don’t know how Keijo un-jumps the shark here? Introducing new girls and new abilities with more epic effects is just an extension of what it was already doing. There’s nothing unusual about the underdog team winning (or doing well against) the expected power house in sports anime either. Making them mean girl jerks doesn’t make them compelling characters to boot.