That ominous cold close of Mamiko leaving the Oumae household was a taste of what was to come this week, with Kumiko getting so caught up in family unrest it literally makes her sick. That being said, she isn’t all that involved in said unrest, merely a witness, and not a happy one at that. Her sister Mamiko, who inspired her to get into music, now wants to become…a beautician.

Her Dad warns Mamiko that if she quits college, she’ll be cast out and cut off. Mamiko blames her folks for making her quit trombone (which, to Kumiko’s shock, she never wanted to quit), but Pops only accepts partial responsibility; to him, the blame rests on Mamiko for not being more forceful about what she wanted to do. 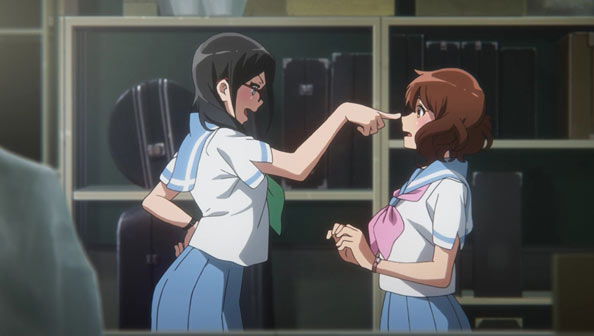 Back at school, Asuka returns to practice, but just as quickly stops coming again after inviting Kumiko to her place to help study for exams, which would be a first. Kumiko quickly becomes quite ill, making the band two euphs down, while Taki informs the band that if Asuka can’t show up for practice, Natsuki will take her place at the Nationals. It’s kind of unsettling how quickly Asuka disappears from this episode halfway in.

Kumiko is sent home by her friends, and after an odd encounter with the third-year Aoi, she ends up in bed, waking up to find Reina quietly sitting by her bed, waiting to spring into action and take care of her. Reina has taken a bit of back seat to others of late (though she hasn’t become as obscure as Shuuichi), so it’s nice to see her here, and to see how far these two have come in their friendship. 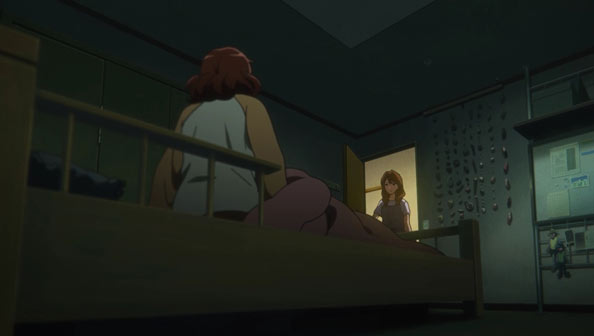 Reina even gets to witness Kumiko getting fed up at her sister when she barges in to turn off a euph CD. Kumiko doesn’t hold her tongue, and lets Mamiko have it regarding her earlier assertion she never wanted to give trombone up. Mamiko retreats, telling her little sister she’ll “never understand how she feels.” Yikes.

But that’s not where things are left. Mamiko runs into Shuuichi in the lobby on her way out (Shuuichi, whose mother heard Mamiko was quitting college). Shuu’s voice proves crucial in getting Mamiko to introspect, and that night, Mamiko comes back in Kumiko’s room – not to complain or fight, but to ask for a recording of her Kumiko’s music.

There’s been a rift between these two sisters for a long time, not helped by their frustratingly implacable father who only seems to know how to sow and escalate rancor in the household. Maybe they can reconnect through music?