What is it: A period historical/military action drama taking place in an alternate world during the equivalent of WWII. Princess Fine and her tiny duchy of Eylstadt becomes the latest victim of the Germanian Empire’s campaign of expansion. She’s eventually caught by Germanian officers, but while en route to Neue Berlin, the legendary witch Izetta, also aboard the plan, awakens and saves her princess.

Why you should watch: If you like historical anime that put a little twist on history (without getting to nationalistic about things). The tech here is strict WWII-era, with steam trains, dive bombers, and Luger pistols. The only fantastical element is Izetta, who will surely prove to be the one most vital to the survival of the protagonist Fine.

Fine is also voiced by Hayami Saori, is often called a “tomboy” by other characters, but is really just a badass who knows she survives because of the love of her people. Production values are slightly above average, and the score is fine. 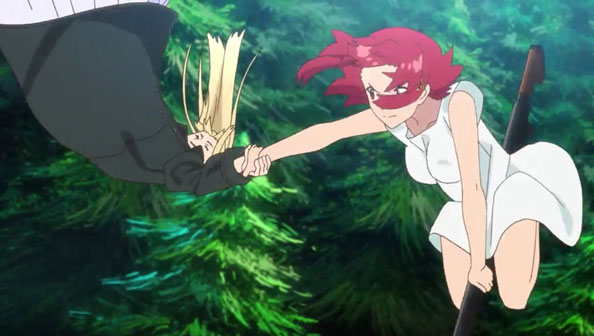 Why you shouldn’t watch: If you’re kinda period-pieced out by the recently-wrapped 91 Days, or if you’re a little put off by plot conveniences like Izetta just happening to end up not only on the same train as Izetta, but the same plane as well, some time later. Perhaps, however, they’ve been drawn together by some particular bond between the witch of Eylstadt and its leader. The bad guys are literally Nazis. Well, quasi-Nazis.

The Verdict: A sturdy and steadily-paced opening episodes for a show with lots of promise, with a strong female protagonist at its core. If you like the idea of a tough underdog princess and her witch companion fightin’ off some quasi-Nazis and fulfilling her duty to her small country of people, this show is up your alley. I’ll be following it for now, since it’s the first Fall show I’ve come across.