Hina’s longtime crush, a baseball ace, has a Big Game coming up, and she wants to be there cheering him on, with a big, fancy bento in hand for when he’s done. She becomes so consumed with what to make she doesn’t realize she has no cash.

Rei buys her the food, but despite waking up early, Hina has problems with the tricky dishes she’s making for the first time, forgets to pick out what to wear, and is ultimately late.

The previous night, and at the Big Game, Rei sees a side of Hina he’s never seen before: a side that seems to be in love. “Love” seems to be a triggering word for Rei, because he suddenly gets a black-and-white flashback to a very unsettling scene where a woman—his mom?—removes his glasses and gets on top of him. Clearly Rei’s concept of “love” is distorted in some way, but there are no details beyond this glimpse. 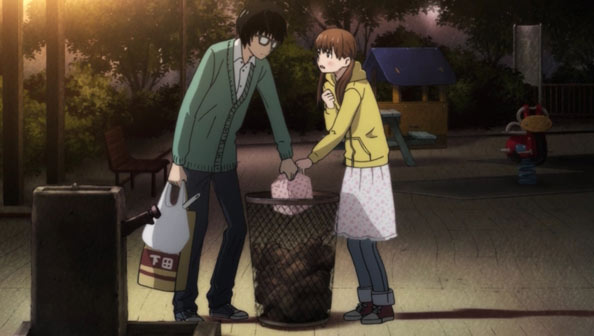 As for Hina, as happy as she looks during the game, when it comes time to deliver her bento, the object of her affection is surrounded by teammates and other girls, and they all go off to eat dinner. He doesn’t even notice Hina’s there.

I’m not sure if Rei has just been hanging out watching Hina this whole time, but when she tries to throw out the bento, he stops her, and suggests they go home and eat it together. Once there, Akari, who Hina believes doesn’t know what she’s going through because she’s so beautiful and good at cooking.

But the truth is, the very same thing happened to Akari once, which is why she gave advice to cook something simple. It’s the same advice their mom gave her. Basically, fellas: after a ball game, make sure to look around for girls with handmade bentos, and accept them before letting yourself get whisked away to other things.

Part Two of this week’s episode dispenses with any other hints as to what that black-and-white flashback was all about (aside form what I saw it as, which was some kind of abuse), and takes a much lighter tone as Nikaido  and Rei run into the sisters while in town grabbing lunch.

Nikaido proves to be a popular guy with Momo and Akari. Momo likens him to Boboro, a popular children’s character who is big, fat, soft, and intelligent; a comparison Nikaido gratefully accepts. Rei also laments that Momo seems happier with Nikaido than she ever did with him :( 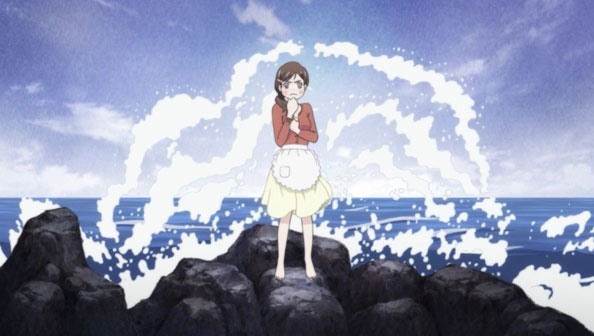 As for Akari, we learn that she harbors an unreasonable adoration for “soft fluffy things” as much as Working!!’s Takanashi loves small cute things. It’s the reason she brings in animals, and Reis, who are skin and bones, and fills them up until they’re her preferred soft and fluffy.

Nikaido is the pre-done deal, and when he asks for a less salty, fattening menu, she takes it upon herself to pull out all the stops for his sake, ignoring Rei, the cats, and Rina (the only Kawamoto not enchanted by Nikaido’s presence).

This episode makes Nikaido more likable, as it shows he’s a decent, kind lad who knows how to go with the flow. Sure, he can be a little pushy with Rei, but his insistence that he and Rei are best friends is in no way insincere or mocking. He’s a nice guy. A nice guy under constant surveillance from his butler!