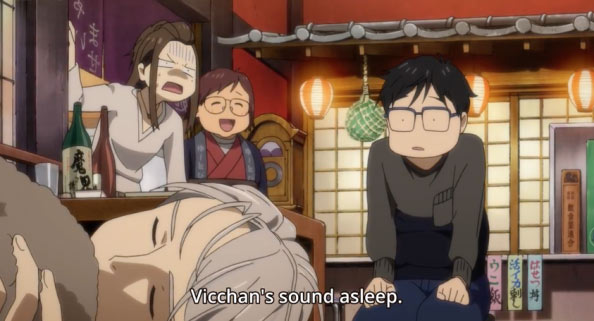 The Gist: Victor Nikiforov is in Yuri’s family inn and all hell breaks loose very quickly. Yuri struggles to know what to feel but terror is a good place to start when confronted with his life long idol. Bewilderment too, as that same person offers him great help, but also takes up a space in the inn, and employs a mix of sexual overtones and tough-love to get Yuri to get back into physical shape.

Training montages, casual tourism of Yuri’s town, and finally a visit to Hasetsu Castle culminate in Russian Yuri arriving in town and challenging Japanese Yuri to a competition for Victor. The trio of Skating Otaku (and the media) swarm the scene and the stage is set for a show down. 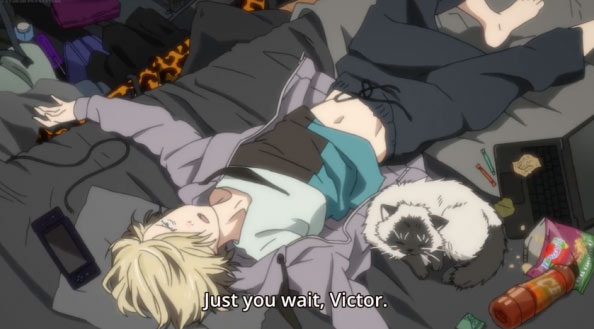 But there’s so much more than that going on — Victor is sucking in so much of Yuri’s world, through the physical place, the friends and the stories, which informs so much about Yuri — and about Victor himself. I can not give an example of another show that did so much in a single half hour, that did not feel rushed or info dumpy in the process…

At the end, Victor pulls Yuri and Yurio (Russian Yuri’s name as given by Japanese Yuri’s sister) and lets them hear two versions of the same music. When they have different responses and preferences, he forces them to stake their competition on the other skaters style. That’s the way to be unexpected for the audience, and being unexpected is the core of professional skating.

Let’s put aside any discussion about Yuri!!!’s top shelf quality animation, intensely detailed (but not distracting) costuming and set design, it’s subtly brilliant audio design and sound track, solid script and voice acting, and focus on what solidly plants this show in the ranks of best of the best. Every aspect of its production and presentation is masterfully executed, and works in concert, but the characters themselves (and their complex interactions) make it shine. 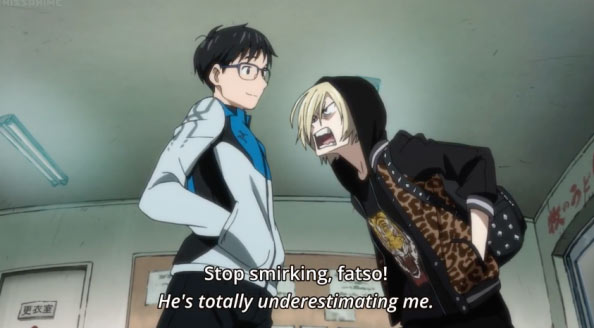 Yurio (Yuri Plistsky) is a tsundere. Except he’s also just a hot tempered boy who with believable distractions, likes and frustrations. His youthful (millennial?) spirit shows through when he wants to take pictures of Yuri’s quirky Japanese town, but realizes that would tip his hand… but then, In the middle of a rant and laughably conspicuous stalking of Victor, he sees (and absolutely must buy) a bad ass sweatshirt with a tiger on it. Which he then selfies onto twitter.

There’s a ton going on with this character, just in one scene, that makes his age and tone and style all feel authentic. So when Yurio and Yuri finally meet, he doesn’t just come off as the villain of the week, or a season-long rival, but an equally relevant character who’s victory or failure has just as much weight. 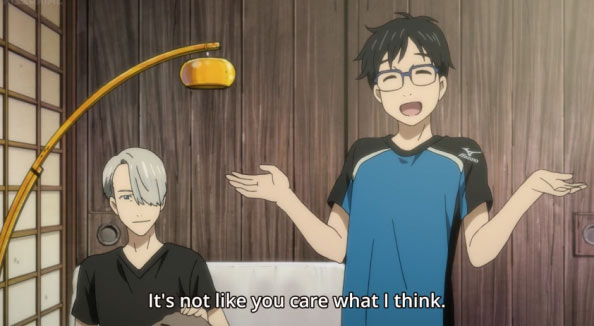 The Verdict: For a very brief moment in the opening, I worried the show was going to become silly and blatantly boy-love, but it not only surged into deeper, more earnest content, it gave simple context as to Victor’s motivations.

He may tease and cross our protagonist’s comfort zone, which itself carries a dynamic bisexuality born of intense admiration for an athlete of the same gender, in a sport that dose emphasize male sexuality, but Victor is here because he is a professional. He too risks a slump or a ceiling in his own abilities and he too will benefit from working with these up and coming skaters.