Kasumi and Asuha’s mom isn’t shy about her goal: to wipe out each and every Unknown she can. In addition to being angry they kept her children captive and used them as tools for so long, she also believes there’s no reasoning with a creature so alien.

And yet, as we learn later this week as the Unknown wind down their operations on Earth, Johannes isn’t quite right about the second thing. Not only is an Unknown able to feel how a human feels, she’s also able to love, in her way. And she in turn is loved back by a human.

Aoi, who continues to be a tense wild card just waiting to go off and undermine the plans to eradicate the Unknown, seems to understand this. It’s not just that she lacks perspective due to an emotional attachment to Yunami and Asanagi…it’s that they’re worth being worried about. She can sense that the two are different from Johannes’ black-and-white, no-quarter viewpoint.

Unfortunately, a great deal of the Unknown still seem committed to attacking humans, and Johannes isn’t in the mood to carefully pick her targets. She launches a huge attack with her big cannon, but when it proves insufficient and she’s taken out of action with an injury, it provides an opportunity for the kids to keep doing what they do best: fight for themselves. 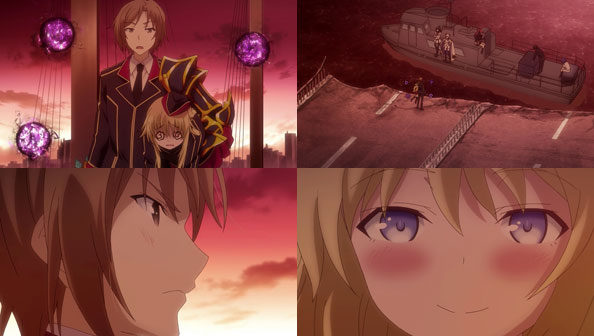 Of course, for our six peeps, fighting for themselves means fighting for those they love: Rindo and Hime, Asuha and Kasumi…and Canaria and Ichiya. Whatever other issues are at hand, they don’t want to lose each other, so they have to fight and they have to win. That means infiltrating enemy HQ and closing the dimensional gate that allowed the Unknown in to begin with.

Aoi remains the third, or rather seventh wheel, following everyone but constantly looking conflicted, and with, as I mentioned, good reason. The ones she wants to protect are the adults who cared for them so kindly all those years, making them more parents than her actual parents (which are probably gone).

As Rindo and Hime encounter what seems to be Yunami’s true form, and the others meet Asanagi, who was human all along, it will be interesting to see how the final showdown will turn out. Will there be a need for fighting? Will the Unknown, led by Yunami, peacefully return to where they came from? Are there more twists in store that will test everyone’s priorities? The endgame approaches.