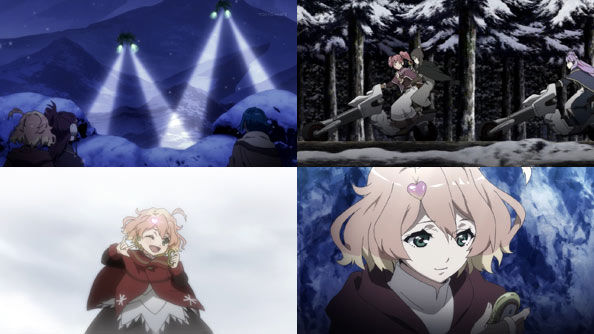 Now that everyone is on Windermere, the this episode has a strong “this is it”, “last-level” feeling to it, where things are going to end one way or another, but hopefully in favor of Walkure and Delta. If they reach the capital and have a tactical show, they’ll win.

But there are serious obstacles, and they make that outcome still feel distant: everyone is scattered across the region, and everyone is constantly on the run from Winderemeran pursuers, including the Aerial Knights.

There are still some welcome moments of peace, however, such as when Freyja leads Hayate and Mirage through caves she used to play in as a child (yikes), and the surroundings and proximity to her home village dredges up memories of singing Ranke Lee songs as a young child.

We also, somewhat amazingly, see Mikumo eat with others for the first time, with Maki and Reina teasing her and bringing out some more human reactions in her. They think she’ll only become a better singer once she actually starts having more human experiences.

Then we have Freyja and Mirage, envying one another for being able to go so far for Hayate’s sake, before their talk is broken up by Hayate.

Mikumo unveils her criminally underused rocket petticoat and martial arts skills to allow Maki and Reina to flee, but Hayate, Freyja and Mirage are caught (and almost killed) by Bogue and the Knights, while Roid confronts Mikumo (in a kind of creepy stalker-y way) and says the trigger words that knock her unconscious. Looks like this mission isn’t going to be as easy as it looks on paper, which is as it should be.

For all of Bogue’s bluster, King Heinz wants the prisoners alive to stand trial before execution, so Lord Lloyd indulges Hayate’s desire to see what they accuse his father Wright of doing with his own eyes. Upon seeing the still seething crater that was once the city of Karlisle (where Bogue’s sister served), Freyja starts to sing a song to soothe the souls lost there, but Bogue knocks her down.

Neither she nor Mirage can change the Windermerans’ long-standing belief in what went down here, and when more evidence is sought, they bring them to a chamber where Wrights’ VF-22 is on display, where his body was found and from which the dimensional bomb was deployed.

That just about seals the deal, right? Wright totally did this horrible thing? Perhaps, but like Mirage, I wouldn’t rule out a heretofore unrevealed motivation…was the same weapon being developed in Karlisle, for instance, and did Wright save the rest of the planet by destroying it? 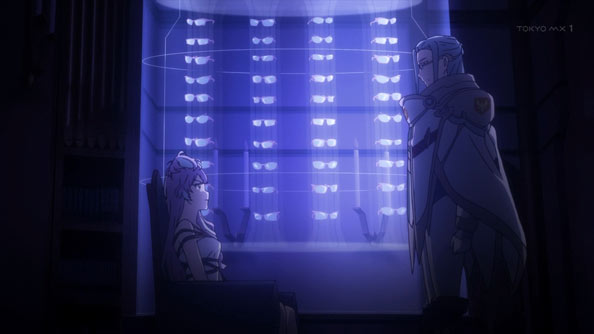 If there’s anything else there, there’s only a few episodes left to educate us and complete the picture that still seems to be missing some key strokes. As for Lloyd, it would seem his designs are to replace the ailing Heinz with Mikumo. Mikumo has said again and again that as long as she able to sing, that’s all that matters.

That philosophy will certainly be put to the test, as will her loyalties and human willpower, as Lloyd isn’t just going to let her sing, but make her sing to further his plans for galactic domination. Here’s hoping there’s enough humanity in her to resist. If not, she might soon be fighting against her former comrades in Walkure and Delta.

In any case…that’s way too many pairs of glasses.